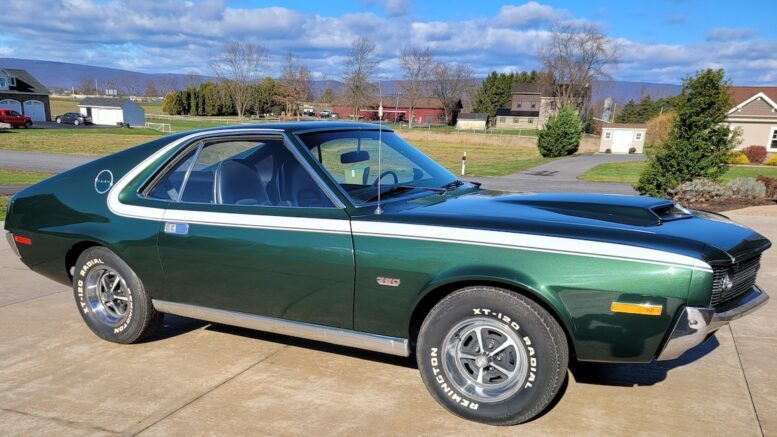 Reader Charles Behrent owns this fabulous 1970 AMX with the 390 V-8 engine under the hood. Only 4,116 AMX models were built that year, making it the rarest of all AMXs. (Behrent collection)

I know of two other AMXs within a 15-mile radius of Mifflinburg. I saw your column in the Shamokin News Item, of which I have a digital subscription. I was born in Shamokin, raised in Trevorton, and have an appreciation of area history. I bought five prints bearing the names of Gloria Zielinski and Michael Zyla, which have been on display in my “Man Cave and Model Train Room.” I believe you are related. Thank you for your attention. Charles Behrent, Mifflinburg, Pa.

Hi Charles, all I can say about your 70 AMX is WOWSER! You own a very rare AMX, as few were built that year. The AMX only offered V8 engines and in 1970 it was either the 360-inch V8 or the more popular 390 V8. Although I do believe yours is one of the Go Pack cars, I can’t be totally sure. 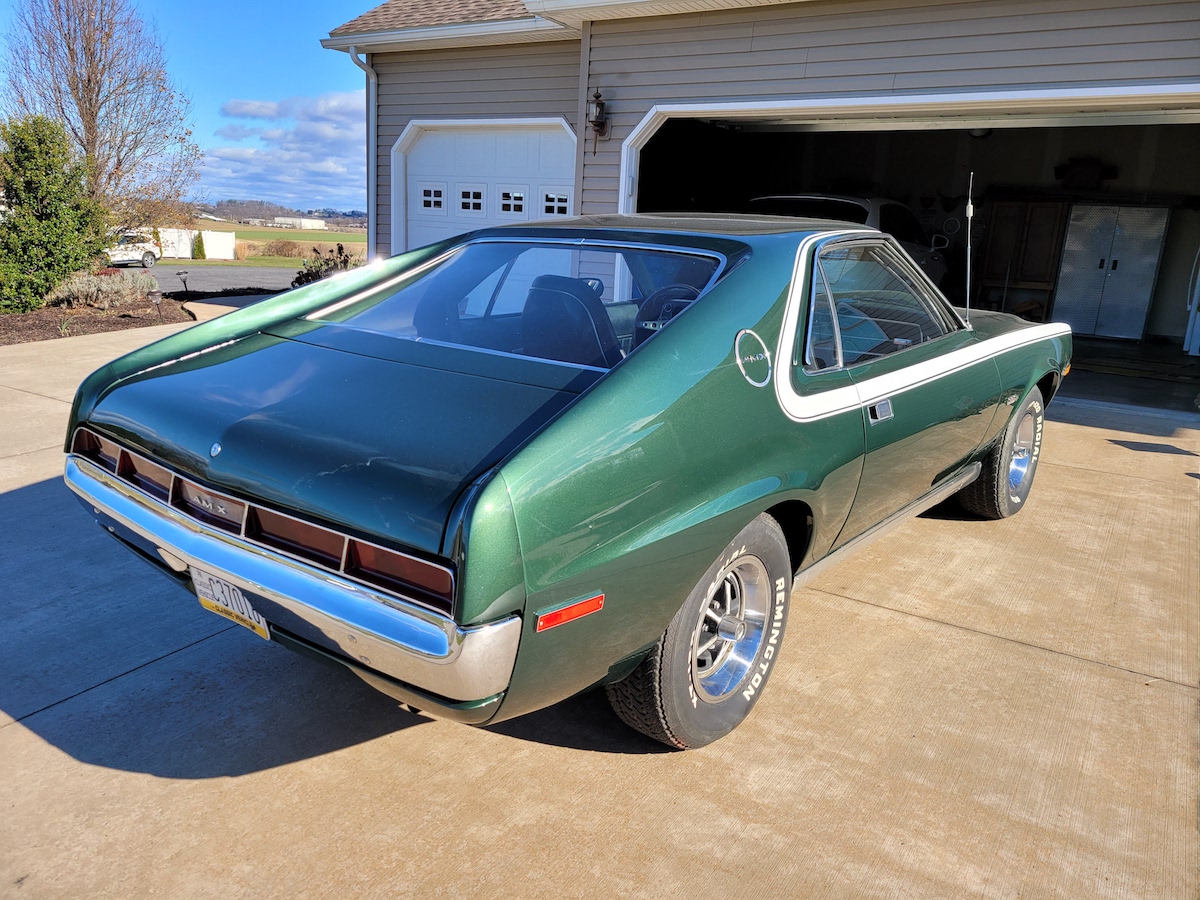 There are two considerations when it comes to the Go Pack question. Consumers could order the 325 horse 390 V8 for $88.10 more, or the enhanced Go Pack for an additional $371.45. In either case, the engine is exactly the same as the Go Pack adds some tire, stripes, and other ancillary upgrade features. (Again, yours looks like a Go Pack AMX.) If you can track down the build sheet, it’s usually under the back seat. However, your AMX doesn’t have a back seat so look in the back portion of the front passenger seat. If it’s still there you’ll know for sure.

Go Pack or not, and unlike the 1968 and 1969 AMXs, the 1970 AMX is the rarest of the breed, as just 4,116 were built. Most significant is the style upgrades as 1970 would be the final year of the two-passenger AMX, not to be confused with the 4-passenger, rear seat equipped Javelin.

The design upgrades were major, from its new front-end style to a Ram Air hood that really enhanced the motif. A new interior, re-designed tail lights, side exhaust trim and a new front suspension were major upgrades. Power came from the two aforementioned V8 engines, including the 360 V8 as its base engine or the powerful 390 as the optional upgrade. These engines featured improved cylinder heads and better 4-barrel carburetors. Power output found the 360 delivering 290 horses while the 390 pumped out a solid 325 ponies. Two transmissions were available, the Borg Warner Shift Command 3-speed automatic or a Borg Warner T-10 4-speed, the latter more popular with the 390 engine.

Also available was the “Big Bad AMX,” featuring special colors as consumers had a choice of three custom colors of green, blue, or orange. Additionally, the bumpers were painted instead of chromed, although there were no additional performance enhancements. Less than 400 of the 4,116 AMXs sold in 1970 were Big Bad color models.

In addition to the V8 engines, the “Go Pack” featured other upgrades including disk brakes and a heavy-duty cooling system. All AMXs came with rear drum brakes and the Go Pack option was also available with the 360 V8.

The 1970s front-end was two inches longer than previous models, resulting in a more performance-oriented look thanks to the Ram Air hood. The AMX wheelbase came in at 97 inches and the curb weight with the 4-speed is 3,219 lbs. Zero to 60 arrived in 5.6 seconds and quarter mile times were in the low 14-second range.

Charles, thanks for your letter and I’m sure you are aware you have one beautiful and valuable AMX on your hands. It’s a beauty regardless of the Go Pack option and a last bit of info finds total production of the three AMX production years coming in at less than 20,000 total. I see cars like yours selling for $50,000 and up. Finally, Michael Zyla is my late father, who passed away in 1999.

Q: Greg I have a question for you, and keep in mind that I have no desire to race my ’63 Mercury Marauder in any formal drag race. Perhaps an informal go; comparing acceleration with a friend every now and then. 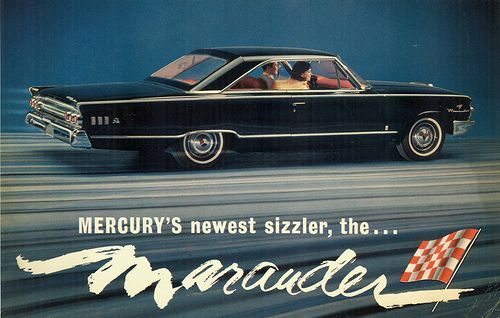 What RPM chip would you recommend I put into the ignition system? I’ve not looked in months, but it seems as if I have a 4,000 rev chip in it now. It seems to me that at about 4K, my 427 is just getting started.

Another subject: A friend has a Chevy Pickup, 1/2 ton. It has some desirable diesel engine and a 10-speed auto tranny. He claims that he is getting 30 mpg. He also has a 1949 or 1950 Ford that he has restored, and I think he did almost all the restoration, engine, interior and exterior by himself. I’ll take some pictures and send them. I await your reply and I hope you are healthy and happy. John May, Chewelah, Washington

A: Thank you very much John and yes, that 4,000 rpm rev limiter chip is set too low in my opinion. Those 427s back then were true powerhouses, developing an easy 425 horsepower. They also dominated the NASCAR racing that year in both Ford and Mercury model window dressing and did well on the drag strips, too. 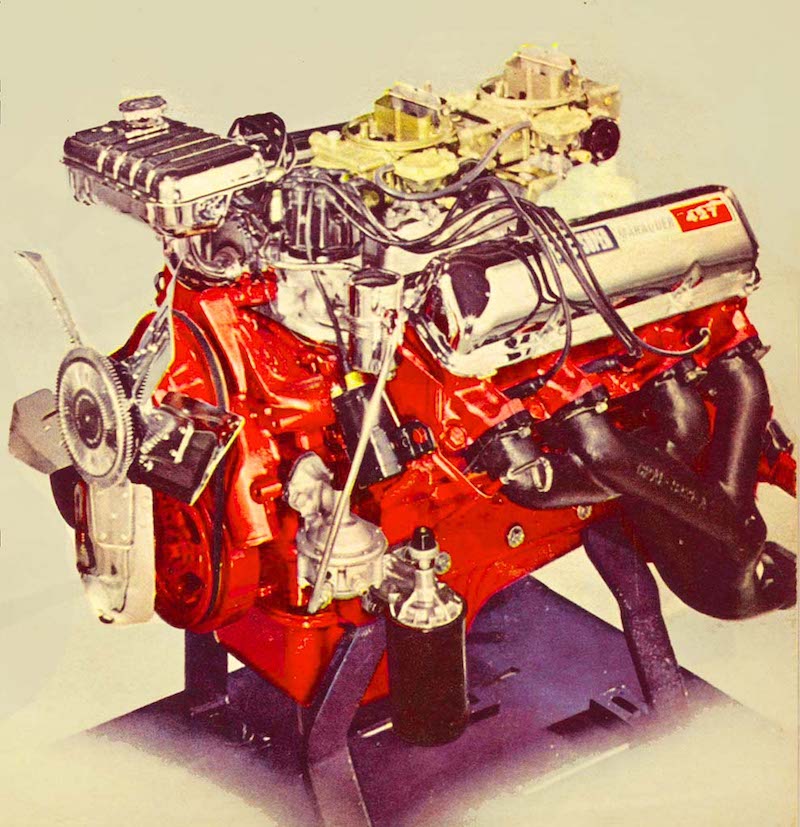 The famous Super Marauder 427 FE side oiler engine that powered many famous race cars. It arrived from the factory with two four-barrel carburetors. (Ford)

I’ll look forward to seeing the photos of your friend’s restored Ford.

(Greg Zyla is a syndicated auto columnist who welcomes reader input on collector cars, auto nostalgia and motorsports at greg@gregzyla.com.)

Be the first to comment on "Cars We Remember / Collector Car Corner; 1970 AMX ‘Go Pack’ and a 427 Mercury Marauder"