Many early campers were delivered thanks to the German Tourist Delivery Program, where a customer would buy their VW Camper in Germany, drive it a little, and then have VW ship the Camper / Transporter to the customer's home in the States. American servicemen purchased many campers in the 1950s and 1960s this very way and no doubt a few Transporter pickups crossed the ocean, too. (VW Photo)

Q: Greg, I remember years ago you shot photos of a rare VW Transporter pickup at a car show in Bloomsburg. I’ve owned several Volkswagens in my lifetime, and enjoyed them all. Could you give us one of your history lessons on the Volkswagen and also that special VW Transporter we both saw? Carl L., Danville, Pa.

A: Carl I’d be happy to. Let’s start with the VW Beetle, which was developed during Adolph Hitler’s reign in Germany. Hitler asked Ferdinand Porsche, he of Porsche motorcar fame, in 1933 to develop what would be known as Germany’s “People’s Car.”

The Volkswagen theory of evolution ad showed the car stayed the same from 1949 to 1963. (Courtesy Volkswagen of America)

In the German language, Volkswagen (pronounced “folksvagen”) means“Volks” for “people,” and “vagen” for wagon. Hitler felt a reliable, cheap and well-built car could be made available to the masses, especially families with two or three kids that could sit in the back. In that sense, he was correct.

Porsche wasted little time moving on these orders, and produced several prototypes. Hitler settled on a rear-mounted air-cooled 4-cylinder for power, which could reach a top speed of 62-MPH and operate in extremely hot weather. 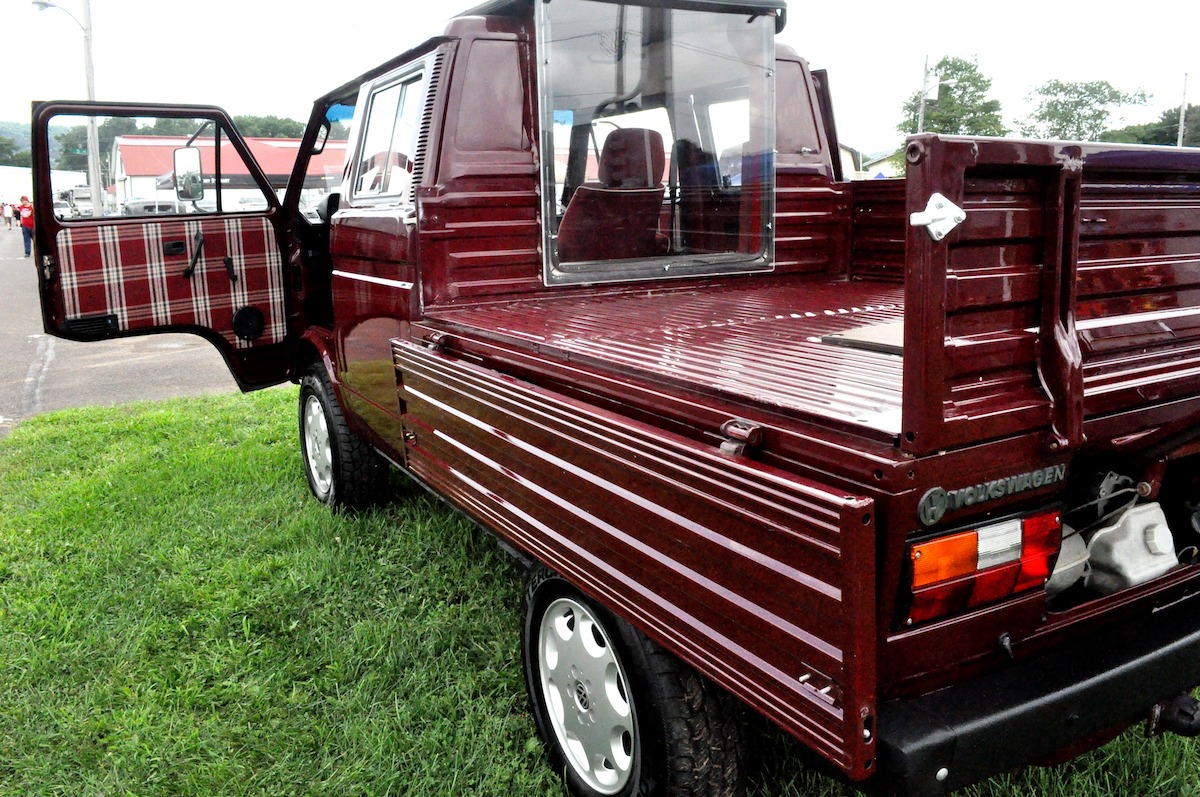 The rear and side view of the VW Transporter Pickup shows how the side rails drop and also offers a view of the large rear window that is removable and allows access to bed or a slide-in camper. (Greg Zyla Photo)

After the demise of Hitler and the end of WWII, the Beetle caught on and was exported to other countries, including the United States in 1949. That first U.S. Beetle featured a split rear window, but consumers weren’t impressed. Most felt it was funny looking, too small, and underpowered compared to a powerful 1949 Olds Rocket V8 or Hudson Hornet Twin Carb Six. Here in the U.S., big was the word.

During the 1950s, VW slowly gained in popularity. The Beetle stayed the same in design, although in March of 1953 that two-piece rear window was finally replaced by single-piece glass. Then in 1957 a full width rear window replaced the oval one and for VW, these were big changes.

This pristine and ultra-rare 1990 VW Transporter Crew Cab SYNCRO Pickup was a major attraction at a past Bloomsburg car show in Pennsylvania. These VW Crew Cab Pickups were never made available in North America. (Greg Zyla Photo)

In the 1960s, the Beetle and sibling Micro Bus found a home in America and fueled the “flower power” psychedelic era that began in the Haight-Asbury area of San Francisco. Back then if you weren’t driving a VW Beetle or Micro, you were in the minority.

Thus sales boomed, and by 1972 the 15th million Beetle was built, surpassing the total production of the Ford Model T. In 1977, Volkswagen Beetles were no longer available in the U.S., but other countries still welcomed them. By 1985, all Beetle production moved to Mexico (which actually started building them in 1955) and the final Porsche style rear engine Beetle rolled off the assembly line in 2003.

Not to be confused with the front-engine, water cooled “New Beetle,” which debuted in 1998 and was sold until 2019 in numerous countries around the world, the original VW Beetle story ended in 2003; so don’t be misled by the front engine Beetle, which was built on the Audi A3 and Jetta / Gold platforms. 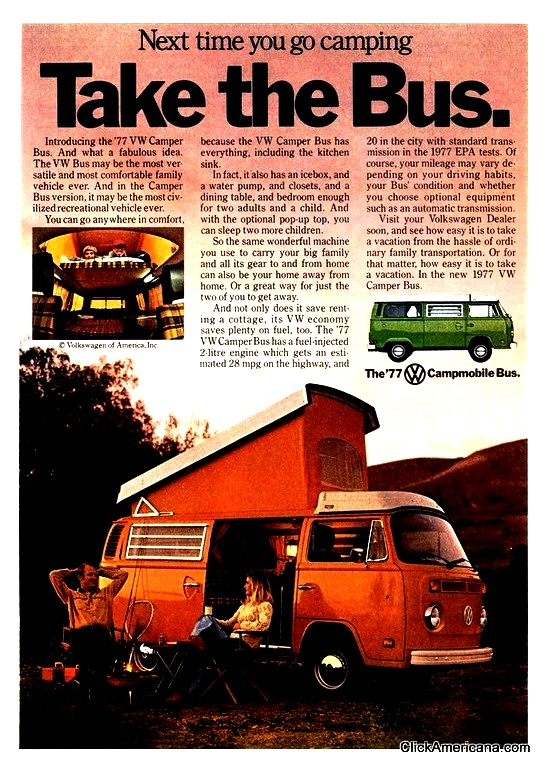 As for the campers and the VW Transporter truck, the reason you never saw any Transporter pickups at a VW dealership is because the 4WD pickups were never made available in North America.

However, I also saw the same pristine condition VW Transporter you saw at a past Bloomsburg Nationals car show and it was indeed a sight to see. It was a 1990 model VW Pickup and indeed the “real deal” 4WD Transporter featuring crew cab, 4-door design with a SYNCRO all-wheel drive unit (see photos). These Transporters came with a rear window that is removable to access the bed or a slide-in camper.

The aftermarket slide-in campers of the day offered room to sleep four or six, a full kitchen and everything needed for a fun weekend of camping. For power, VW 2.4-liter water-cooled 4-cylinder mates to a 5-speed manual transmission, the latter standard on the 4WD pickup models as both axles lock up for optimal traction.

Although VW had been producing pickup style vehicles since the early days on its “Micro Bus” chassis, they would later be known as Kombis, Campers, and Flower Child Buses in many different window and panel designations. These early VWs are identified as “T-platform Type 1” models.

The initial T-platform began in 1950 and lasted through 1967. It included all those original Micro Buses, and then later in 1967 a brand new generation Type 2 arrived, which included the re-designed VW Campers. The air-cooled engine was updated in 1972 with a more powerful design.

A note on the campers includes the famous Westfalia Company, which was the official camper conversion company that worked with VW to produce its campers. Between 1951 and 1958, Westfalia built some 1,000 VW Camper conversions and in 1959 new models were added that evolved into the pop up tops with attachable tents. This second T-Platform generation lasted until 1979 and then in mid-1979, VW introduced its new generation that lasted through 1992. It included the Transporter SYNCRO 4WD pickup and the newly designed VW Vanagon vans and campers.

Still sporting the air cooled engine, these Vanagons were very popular units while the 4WD Transporter trucks were very rare in North America and if one was seen in our country, it probably arrived under a special import designation or perhaps later as a classical vehicle designation.

Three more van generations followed, with water-cooled engines appearing in 1983. To this day when we speak of Volkswagen Transporters, it is usually 99-percent of the time about the Micro Buses and Vanagons as opposed to the Transporter pickup trucks.

Thanks for your letter Carl and remembering this very rare Transporter from the car show.

Be the first to comment on "Cars We Remember / Collector Car Corner; The history of Volkswagen’s Beetle, Transporter pickup and Micro Bus"