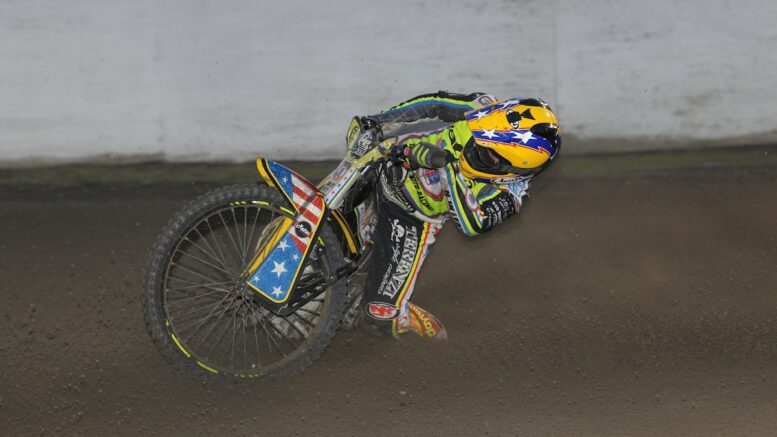 The action was hot at Champion Speedway on June 11, even though the weather was nice and cool!

In the scratch-racing portion of the program, “Sideways” Spencer Portararo, the former East Coast Champion, was the rider to beat and was looking very fast. In the Main event, five-time track Champion Adam “The Missile” Mittl, of Endicott, who was also looking sharp, jumped out into the lead on his Justice Bros / Tanks Auto / Scotts Headers / Arai powered GM and looked to have the race won for several laps, but Portararo set him up on the last lap of turn 1 when he went just a bit wide and made a great move underneath Mittl to take over the last lap and win aboard his Justice Bros / Harman Boyz / Arai / Tanks Auto /Scotts GM machine.

Len McBride, the 5-time Champion from Windsor, took a solid third. Portararo would get his name on the Speedway Joe Cup, which pays tribute to the late speedway fan, Speedway Joe Hodak of Johnson City, who hardly missed a race for 30 plus years.

Young Dalton Oakden would win his first Handicap Main of his career in the last event of the evening. Coming off a 20-yard handicap, Oakden quickly established himself as the leader and showed poise to hang on during the six-lap feature while a couple other young riders, Levi “The Hornet” Harris of Windsor and Mike Cortese of New Jersey, did a great job to take second and third respectively.

Harris would win his third D-2 Main as well, despite good pressure from Dana Marsh of Apalachin, who is improving weekly and gained a solid second while the “Red Rooster” Brian McManamon rode solidly for third.

In the D-3 wars, rookie femal Chloe Schnurr, from the Rochester area, scored her first Main event victory with a smooth wire to wire ride.

Cody Pierce and Joel Farwell had an exciting seesaw battle in JR Speedway racing with Pierce taking the checkers, while MaColey Saunders and Jordan Taft won the Dirt Bike and Trike divisions.

The racing has been great and the facility looks fantastic at Champion Speedway as they celebrate their 48th season this summer. The shows have been ending at 10 p.m. so families can get home at a reasonable time.

Stop out to the next event on June 25, the Hurricane Hank Bassett Cup Championship, at 7 p.m.