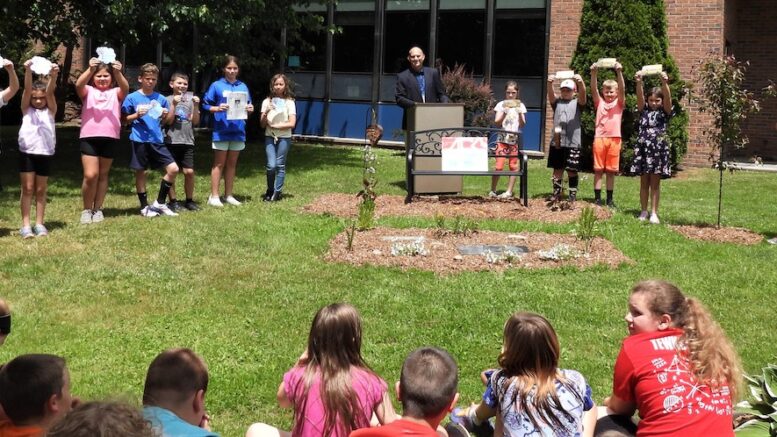 Students from grades second through fifth, along with teachers, staff and guests, gathered on the front lawn near the school’s main entrance for a 1 p.m. ceremony.

AES students gather for a group photo around the area of remembrance near the school’s main entrance. Student-members of the AES Garden Club, Community Service Club, and the Green Team participated in a special project that relocated remembrance stones in honor of two former OA staff members, Roy Williams and Nancy McQueeney. A new tree, flowers, a bench and bird feeders were also placed. (JoAnn R. Walter photo)

Student members of the AES Garden Club, Community Service Club and the Green Team participated in a project to relocate two remembrance stones that celebrate the lives of Williams and McQueeney, and planted a new tree to replace damaged trees. Placed several years ago, the stones had settled into the ground. Today the updated area of remembrance showcases flowers, a bench, and bird feeders.

AES Principal Thomas Beatty remarked, “In preparing for this celebration, I talked to many people who responded that Mr. Williams was passionate about kids and learning, and that Ms. McQueeney loved kids and was always doing things for other people.”

Roy L. Williams, who passed away in 1995, was an enrichment teacher of the QUEST Program at AES and OES. Nancy McQueeney was a school bus driver who tragically lost her life in an auto accident in 2011. McQueeney was active in the PTO, and is remembered for her efforts in spearheading fundraisers that resulted in the construction of the pavilion near the AES playground.

Pictured is a stone in honor of Roy Williams that was relocated to a new area of remembrance at AES. (JoAnn R. Walter photo)

During the ceremony, AES students read two poems, one written by students in memory of Williams that had been published in a yearbook, and a second poem written by Williams himself.

Students held up signs that showcased words describing the personal characteristics of Williams and McQueeney. For Williams, examples such as “dedicated, nice, wonderful, a story teller and a history buff,” were shared, and for McQueeney, words conveyed included, “loyal, creative, humorous and generous.” McQueeney was also fondly remembered for her love of baking cookies. 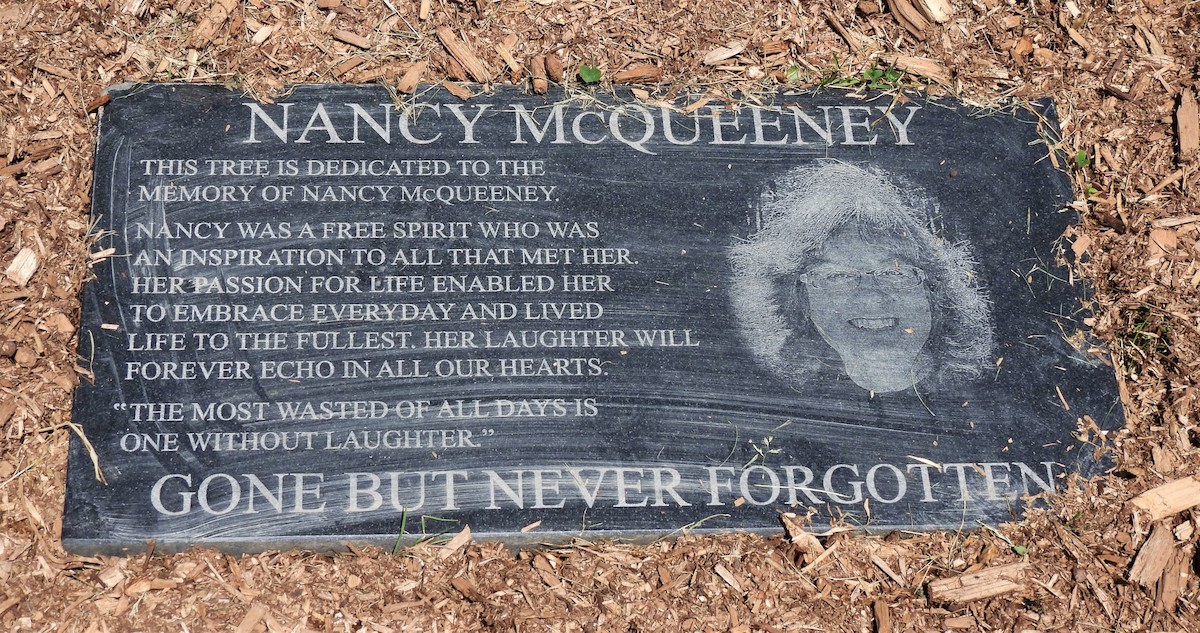 Pictured is a stone in honor of Nancy McQueeney that was relocated to a new area of remembrance at AES. (JoAnn R. Walter photo)

Special Education teacher Tessa Pozzi-Morgan explained that the three clubs were started about four years ago, and where some 80 students take part in after-school activities about once a month. It was noted that several fifth grade students have participated since they were in second grade.

It is Pozzi-Morgan’s hope that the activities will bring the knowledge gained full-circle. For instance, a new venture this year was to plant a pumpkin patch in the school garden, and as students learn all aspects about planting and harvesting, they can take those lessons home.

At the conclusion of the ceremony, Beatty shared, “The student work is commendable. The values of community, volunteering, seeking knowledge and helping others can be seen in each of these children today.”

He continued, “I hope you take away from today’s rededication ceremony a reminder that there are so many good people in the world who live their lives in service to others,” and then to the students directly, “I strongly encourage you to continue with after-school clubs and activities and to stay involved as you enter middle school and beyond. Your work outside of the classroom will have a lasting impact.”