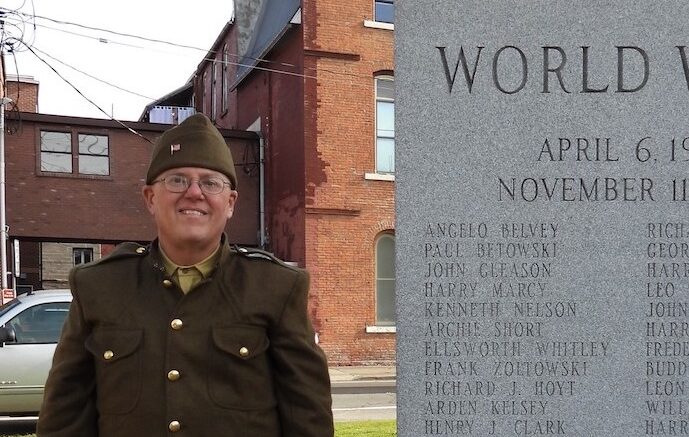 Gary Mattscheck, a life-long Owego resident, wanted to remember the sacrifices of Tioga County’s World War I service members. Here, he poses next to the World War monument in Owego, N.Y., dressed in a traditional "doughboy" uniform. He also attended the annual ceremony at V.F.W. Post 1371. (JoAnn R. Walter Photo)

On Veterans Day, an Owego man stepped up to honor Tioga County’s World War I heroes.

Mattscheck remarked, “I am so proud to be honoring them.”

World War I, also referred to as “The Great War” or “The war to end all wars,” was our nation’s first major overseas war. More than 116,000 American lives were lost in the 18 months mobilized on European soil, and more than 204,000 were wounded in some of the bloodiest battles in military history.

The names of 25 Tioga County doughboys, a name affectionately coined for the American soldier during World War I, are remembered with their names inscribed on the monument located at the Tioga County Veterans Memorial Park in Owego. Two additional doughboys have been recognized since the monuments were erected nearly 35 years ago.

Gary pointed out one particular doughboy, John Sittelotta, age 26, who was the first Tioga County soldier killed in France.

A newspaper report, from May 13, 1918, announced, “John Sittelotta gives life for world’s freedom.”

Sittelotta, a Private with the 18th Infantry Regiment of the 1st Division, shipped out in September of 1917. He died from wounds he received in action. He now rests in the Somme American Cemetery, located about 100 miles northeast of Paris, France. 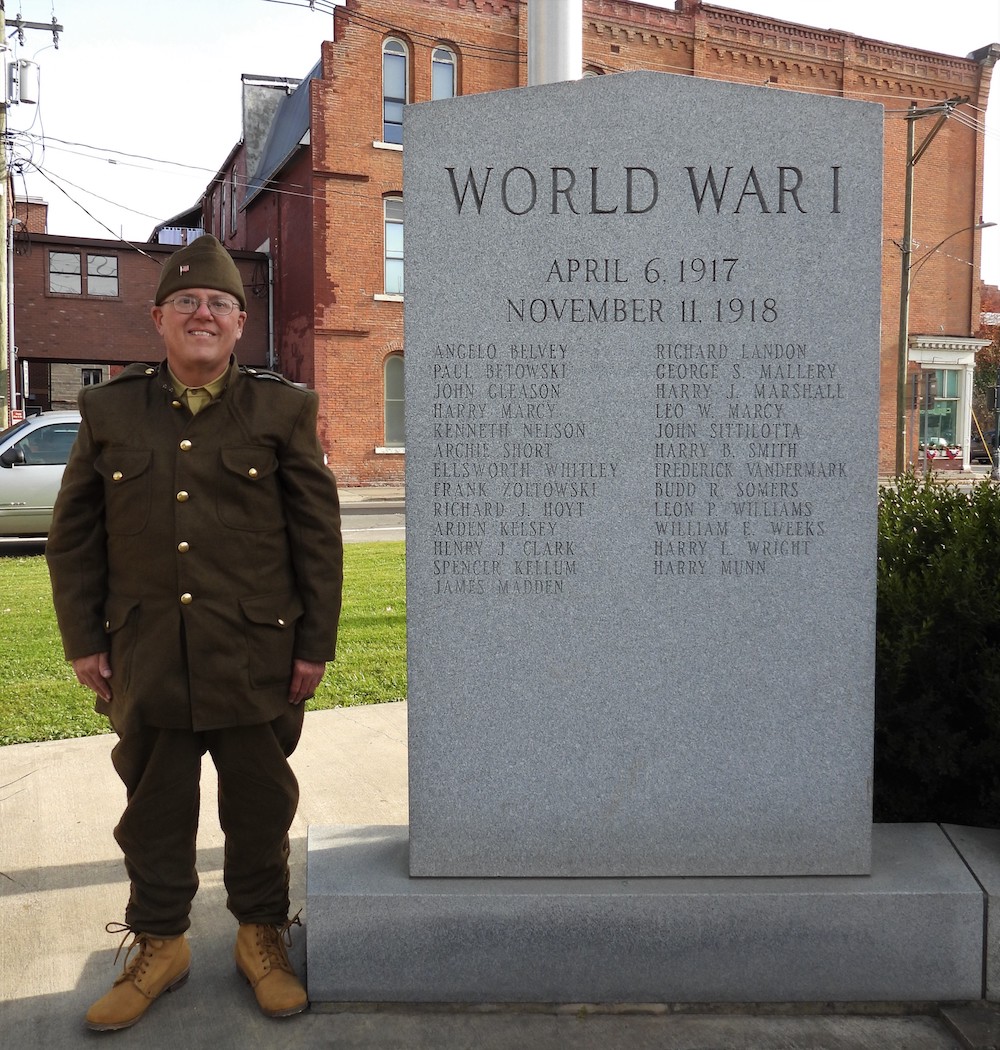 Gary Mattscheck, a life-long Owego resident, wanted to remember the sacrifices of Tioga County’s World War I service members. Here, he poses next to the World War monument in Owego, N.Y., dressed in a traditional “doughboy” uniform. He also attended the annual ceremony at V.F.W. Post 1371. (JoAnn R. Walter Photo)

Gary added, “John Sittelotta was an Italian immigrant who lay down his life for our freedom.”

Gary explained that a few years ago he saw an authentic World War I uniform at the Early Owego Antique Center, a favorite store that he frequents. He remarked that he recalls the fabric was very delicate, and posted near it was a sign advising customers not to touch or handle it.

Gary explained that he is inspired by the time period, and has collected several old phonographs, such as a Victor. He plays music of that era, including one signature song of the day, “Over There,” by Nora Bayes, an American singer snf songwriter who is famous for co-writing the classic, “Shine On, Harvest Moon.”

In addition, Gary said he has a copy of a patriotic recording delivered by General John J. Pershing and Commander of the AEF, which was an appeal to Americans for their support of the war efforts. Another piece that Gary has in his collection is Thomas Edison’s infamous 1919 recording, “Let Us Not Forget,” a speech by Edison to the American people after the war ended.

All of these aspects inspired Gary to search out and purchase his own World War I doughboy uniform. He ordered one a little more than a month ago from Replicaters, based in India. The company supplies individuals, collectors, and living history groups with AEF uniforms and associated insignia and accessories.

The uniform features trousers with buttons and laced-up sides, and which Gary chuckled, “No zippers back in those days.”

The wool uniform also includes boots, a khaki shirt, a hat, and a coat with gold-colored buttons. For Veterans Day, Gary said, he pinned an American Flag to the hat.

One item that didn’t come with the uniform, Gary remarked, “I purchased thick alpaca socks from the antique center.”

A couple of Gary’s friends were concerned that making a purchase directly from an overseas company so far away from Owego might result in no product delivered, but Gary remained positive and said that he is quite pleased with the quality of the uniform.

He attended his very first Veterans Day ceremony on Nov. 11 at the Owego V.F.W. and was introduced during the event.

Gary hopes that by sharing his story it will inspire others to acknowledge our veterans and be a part of Veterans Day and other occasions that honor veterans.

Be the first to comment on "Owego man honors our doughboys"