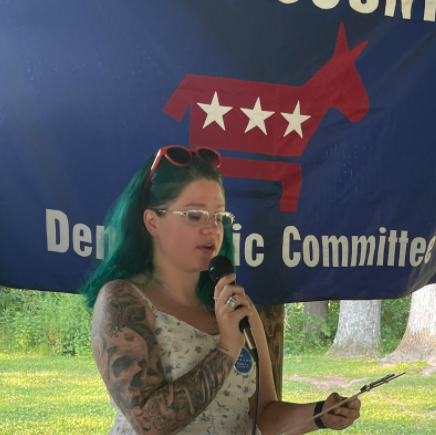 It was a muggy and late Monday afternoon in Owego, but the fundraiser affectionately dubbed “A Bite and A Bid” was a joyous occasion of special significance for local Democrats. On Aug. 9, 2021, for the first time in nearly two years, the Tioga County Democratic Committee was able to host an in-person event.

Held under a pavilion in the Hickories Park in Owego, N.Y., this long-awaited get together seemed to mark a turn in the tide after a grueling election season consisting almost exclusively of Zoom meetings, emails, and conference calls.

As far as political events go, “A Bite and A Bid” was a hybrid of sorts; part fundraiser, part family picnic, and part campaign launch party.

With over 60 registered attendees, organizers stated the event was especially important to local down-ballot politics as it also served as the welcome wagon for a surge of new Democratic party members and the candidates wasted no time in reaching out.

Nancy Della Pia launched her campaign for a seat on the Owego Town Council by sharing her background as a public health nurse, military wife, and community assessor / organizer who has worked in both rural and urban areas. She stated that if elected, her time as a councilwoman would be one that focuses on increased government transparency, community access to government, and fiscal responsibility.

Echoing the concerns of town residents who worry about the climbing costs of the Highway Department Building and storage building, Della Pia stated that she hopes to bring balance to the budget as well as to the council.

Irena Raia, candidate for Tioga County Legislator District 1 and relative newcomer to the local political scene, emphasized an urgent need for representation in local government. If elected, not only would she be the first woman in the history of the county to represent her district, but would also join a legislature that currently has only two of its nine seats filled by women, in spite of women accounting for 50% of county population, Raia explained.

At 30 years old, Raia would be the youngest person ever to represent District 1, insisting that Tioga County will have a hard time attracting young families to the area without the perspective of younger voters present and valued in local government. She hopes her run for office will inspire others to participate in down-ballot politics and, as legislator, would focus on increasing government communication, accessibility, and community engagement. 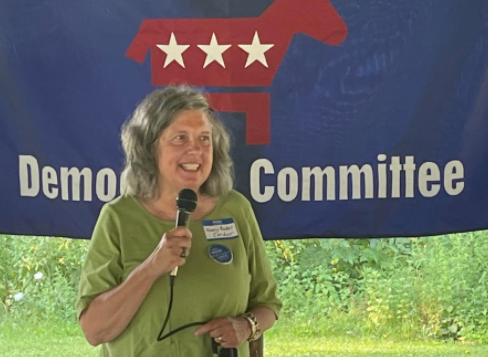 Nancy Rader, retired Professor of Psychology at Ithaca College and candidate for Candor Town Board, used her time at the microphone to highlight the critical need for more community-centered governing, citing her years of serving on various boards and committees and securing grants throughout her career as the template for her approach to leadership. As a board member, she stated she would work to increase community engagement and access to down-ballot politics.

At one point during the event, the upbeat mood was tempered as Max Della Pia, veteran, former congressional candidate, and Chair of the Tioga County Democratic Committee took a few moments to acknowledge that he, along with 51 other committee chairs across the state, had signed a letter demanding Governor Andrew Cuomo resign following the results of an investigation into sexual assault allegations against the Governor, a resignation that has since transpired and is effective on Aug. 24.

Della Pia then noted how proud he was to be part of a party that valued accountability and voiced his enthusiastic support for the three female candidates running for local office, encouraging others to run in the process. The night concluded with a lively auction of services and goods directed by Patrick Ousterout. The event included musical accompaniment by Paul Phillips and a shared meal from The Owego Kitchen.

You can join the Tioga County Democratic Committee and learn more about their upcoming event schedule by visiting tioganydemocrats.com.