The 110-year-old fire bell located in the Owego Central Fire Station’s clock tower on North Avenue is scheduled for removal at noon (estimate) on Monday, April 5. The 813-pound bell, 24-inches in height and 34 inches wide at its base, will exit through a clock tower vent and then be lowered the roughly 100 feet descent from the clock tower via crane to Temple Street.

Bob Verdin of the Verdin Bell Company is pictured next to the Owego Central Fire Station clock tower. Provided photo.

The bell will be transported to a Verdin Bell Company facility in Ohio where it will be sandblasted and polished, and then returned for installation in the Owego Hose Team’s Steamer House building planned for construction next to Owego Fire Station #2 on North Avenue.

Manufactured by MeNeely Bell Company of Troy, N.Y., the bell was presented to the Village of Owego by Dr. Sidney Wells Thompson on Dec. 11, 1911, the year Owego Central Fire Station was built. Dr. Thompson, a prominent Owego resident, was well known as the second automobile owner in Tioga County, purchasing his first vehicle in 1901. The World War I Veteran was President of the Village (now called Mayor) and Vice President of the New York Automobile Association for several years.

From colonial times through the 20th century, one of the only means of calling firefighters to action in the event of a fire was the cry of “fire,” which was taken up block after block until the church sextons could run to their steeples and start ringing church bells. Even where there was a regular fire bell system, as was the case in Owego, churches usually chimed in, so every volunteer firefighter was sure to hear some bell alerting them to respond. 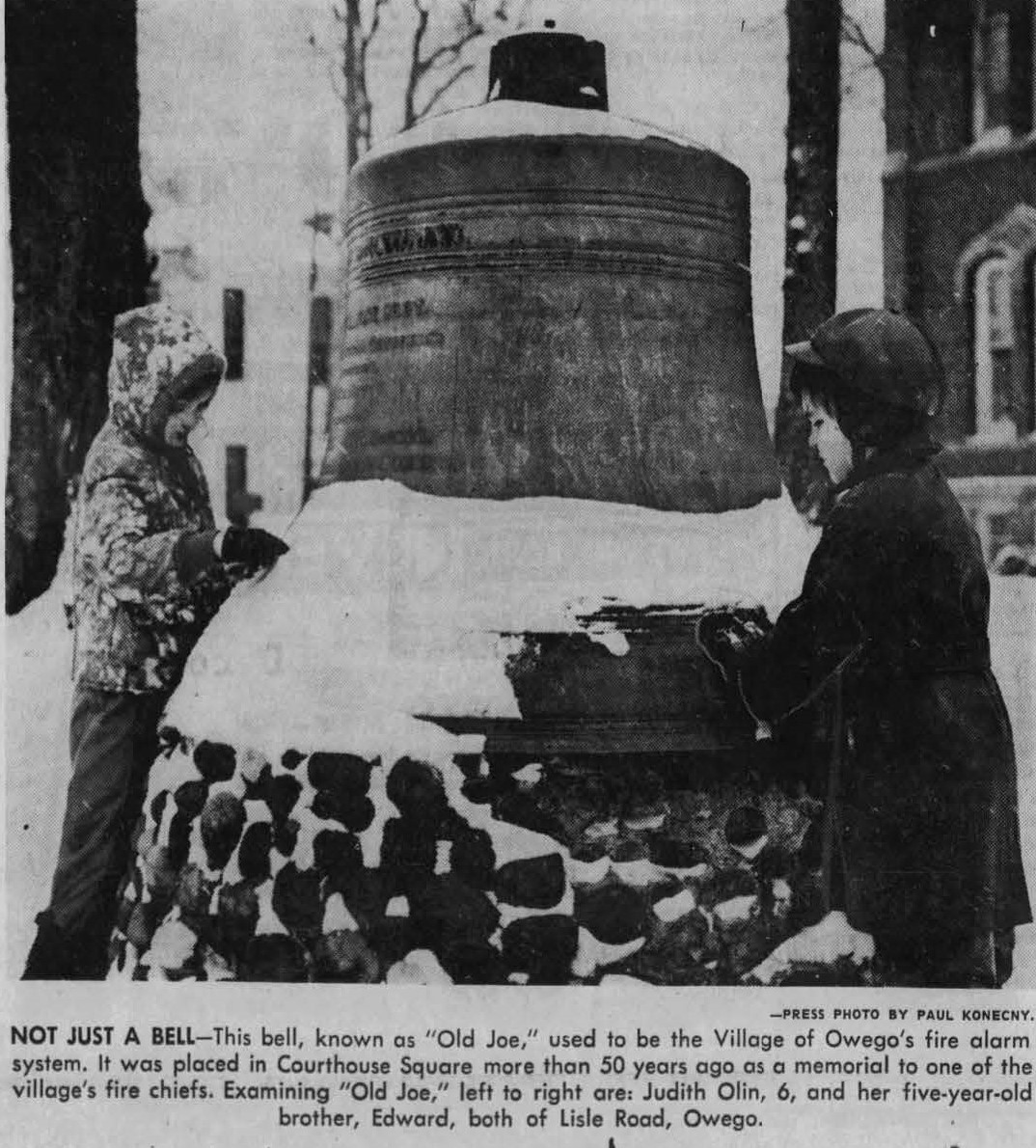 Children observe the “Old Joe” fire bell in the Courthouse Square in 1967, and in this undated press photo. Provided photo.

Modeled after a Steamer House located in Marathon, N.Y., it will be constructed of cedar wood frame and glass solarium walls for 360 degree viewing, and will include a steeple for the fire bell. The bell will eventually chime on the hour and for special occasions as it did in the past.

The Steamer House phase of the Hose Team project is estimated to cost in upwards of $50,000. The bell addition will increase that cost by $20,000. The Hose Team is raising all funds for the Steamer project privately. 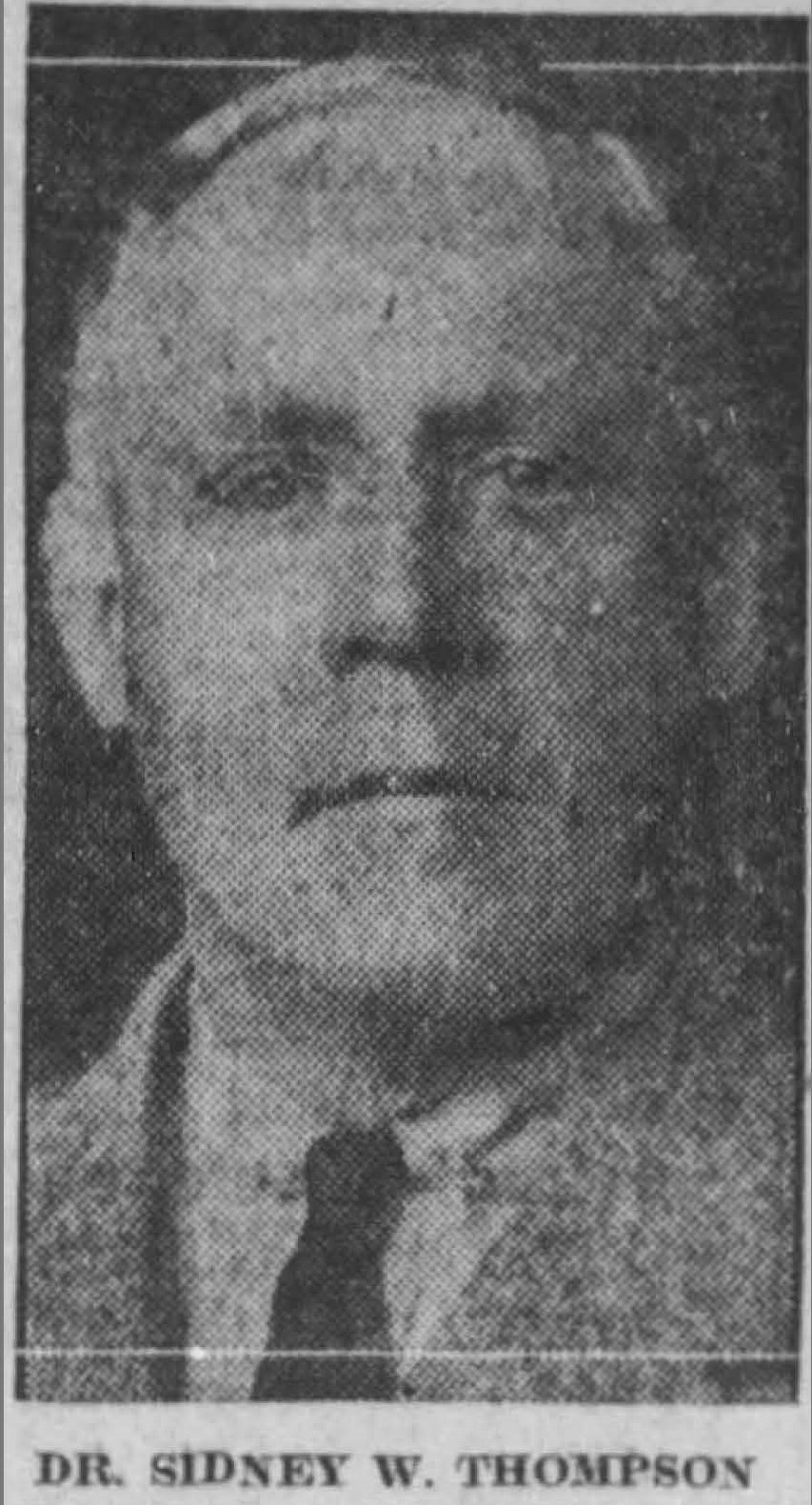 To help offset additional costs for the bell, the Hose Team is selling “Doc ‘T’ Preferred” bell stock as a nod to Dr. Thompson, who donated the bell in 1911.  For $25, an individual can buy one pound of the historic bell; only 813 pounds, the bell’s weight, will be sold.  A similar campaign was held in the early 1900s that raised funds for the “Old Joe” bell.

“Doc ‘T’ Preferred” stock can be purchased on the Hose Team website, www.OwegoHoseTeams.com. All contributions are tax deductible as the Hose Team is a recognized 501c3 not for profit organization.

Several benefits for the Steamer House project, championed by the Hose Team, include bolstering the North Avenue corridor in the Village, and improving an abandoned property while bringing foot traffic and tourists to the business district; supporting the Village’s commitment to historic preservation and maintaining the downtown charm and character that appeals to residents and visitors; enhancing the Village’s gateway to historic downtown; and complimenting Downtown Revitalization Initiatives (DRI) efforts underway in the Village – all while costing the Village of Owego taxpayers nothing in restoration, construction, and maintenance costs as the Hose Team is raising funding for the project privately.

Hose Team members continue to improve the site and have removed the abandoned barbershop building. The overgrown trees on the property were recently cut down and the Hose Team will harvest the wood for fuel for the steam fire engine.

Once complete the Steamer House will provide a unique setting and backdrop for the Owego Fire Department’s existing elementary school fire prevention program. This program is designed to prevent injury, illness, and other unsafe situations for children as part of the department’s mission of saving lives.