Last year, Governor Andrew Cuomo issued Executive Order No. 203 that would call for a New York State Police Reform and Reinvention Collaborative. The law was prompted by the death of George Floyd in Minnesota; a death that sparked protests daily throughout the nation and in communities across New York State to demand change, action, and accountability. Protests also included a vigil for George Floyd that was held at the Courthouse steps in Owego, and organized by local resident Dylan Feliciano on June 11.

On Jan. 27, 2021, Tioga County’s Legislative Chairwoman, Martha Sauerbrey, held a public meeting to get input from officials and the community as they prepare to put their plan out to Albany.

With over 35 residents and lawmakers zooming in, the meeting offered an opportunity for questions and concerns and ideas. This followed a presentation by Tioga County Sheriff Gary Howard, where he described the law enforcement relationship within the community.

Chair Sauerbrey established the local Police Reform and Reinvention Collaborative in Tioga County in the fall, and as directed by Governor Cuomo’s Executive Order of June 12, 2020. The process has been structured according to the guidance provided in the New York State Police Reform and Reinvention Collaborative, and requires community input and participation, along with an assessment of Policing Policies.

The process for the Police Reform and Reinvention Collaborative, according to Chair Sauerbrey, is to review the needs of the community served by The Tioga County Sheriff’s Office and evaluate the department’s current policies and practices; establish and evaluate policies that would allow police to safely perform their duties; involve the entire community in the discussion by way of a public survey and possible zoom community meetings; develop policy recommendations resulting from this review; offer information for public comment; present the plan to the local legislative body to ratify or adopt it; and then certify the adoption of the plan to the State Budget Director on or before April 1, 2021.

This process, Chair Sauerbrey noted, began in September of 2020; and although the county’s plan is due in April, they hope to put it out the door in March. When asked why so quickly, Sauerbrey added that the county is extremely busy with the pandemic and budget issues, and wanted to get this done so they could move on to other pressing issues.

Regarding the survey that was conducted in late fall, Chair Sauerbrey stated they received over 500 responses. She then introduced the county’s Sheriff into the zoom meeting to discuss their relationship with the community and their policies, and to answer any questions.

One question rendered to Sheriff Howard talked about their policies in general, and if they are reviewed and audited.

Sheriff Howard stated that Tioga County was the fifth county in the state to be accredited every five years; an accreditation that requires regular reviews of the policies of the Tioga County Sheriff’s Office.

The sheriff also talked about chokeholds, and a recent policy put out by Albany that is now restricting them.

“We have to revise our policy for this,” said Sheriff Howard of this particular form of restraint used by officers.

Between tasers, chokeholds and tear gas, Sheriff Howard talked about the different tools officers can utilize to de-escalate a situation or apprehend a suspect. He did note, however, that under Article 35 of the Penal Law, which was adopted in 1965, chokeholds might be used as a defensive action to affect a lawful arrest or to lawfully detain a person.

The sheriff also talked about methods of de-escalating a situation, and stated that this is one of the most difficult and dangerous things that an officer faces each day.

“If you show up to a situation with force, you are going to get force,” said Sheriff Howard of de-escalating a situation, adding, “It’s one of my biggest things. Everyone has to be trained.” 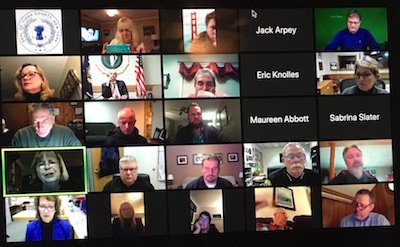 Being a small, rural county with a population of about 50,000, the sheriff talked about their connections within the community.

“We do ‘Cops on Top’ at Dunkin Donuts, and we send youth to the Sheriff’s camp at Keuka Lake,” said Sheriff Howard, who also noted that they helped with many drive-by birthday parties since the onset of the pandemic; this in addition to all of the parades and events they support during a more normal year.

As for their struggles, the sheriff noted that they are having trouble hiring people to work on the force, and that they have lost about five of their workers over the past year.

He also noted that the new bail reform laws have been tough.

“Criminals are getting let back out onto the streets,” said Sheriff Howard, noting that the 104-bed jail was down to housing 40 inmates last week. He specifically noted that the victims of the crimes don’t like it, and cited an example of a man robbed by a neighbor, and how that neighbor was back home that afternoon.

The community input received during Wednesday’s meeting, however, was moderated nicely as some uncomfortable conversations were opened up.

Regarding the Black Lives Matter protests and demonstrations that took place last summer, resident Irena Theresa Rose Horvatt Raia asked Sheriff Howard about dialogue, and wondered why, and after 100-days of demonstrations at the Courthouse Square in Owego last summer, the police never came to talk to them.

Swiftly, Sheriff Howard stated, “We went by a few times, but having signs that said ‘defund the police’ didn’t make us feel very welcome.”

And thus, the dialogue has begun; or at least in Tioga County.

“The response with having the deputies around has been positive,” said Dougherty, adding, “I have former students that are now deputies, and I hope that will continue.”

Other topics discussed during the meeting included the training of police for Mental Health calls, the burden on the 911 Center, and keeping people on the force during challenging times.

You can view the entire meeting on the County’s YouTube Channel, www.youtube.com/channel/UCG5OUG1iGUMvP6Y6o5J6K3g.

Chairwoman Sauerbrey concluded, stating, “In the next few weeks we will be collecting all of the information that we have gathered from the community and create a plan to submit to the Governor. When the plan is complete, it will be posted on the Tioga County website, https://www.tiogacountyny.com, for the public to view and make additional comments. The plan has to be to the Department of Budget by April 1 so there is little time to waste.

You can read the Governor’s Resource Guide for the Police Reform and Reinvention Collaborative in its entirety at www.governor.ny.gov/sites/governor.ny.gov/files/atoms/files/Police_Reform_Workbook81720.pdf.