The Zyla family traveled many times from Vineland, N.J. to Ranshaw, Pa. to visit family in a 1955 Plymouth Savory, shown here in 1957 at the Chestnut Apartments on Chestnut Ave., in Vineland, N.J. It was a 350-mile round trip. (Zyla collection photo)

Q: Greg, to this day I’m still a MOPAR and Plymouth lover. Why did Chrysler let Plymouth go? I know Dodge is still their everyday consumer car, but Plymouth I feel was more popular. Thanks much, Kevin L., Detroit, Michigan.

A: Kevin, as a past owner of both Plymouth and Dodge cars and Dodge trucks, I feel your pain. When you revisit Plymouth’s history, it was indeed a major player in the lower price family car offerings, much like Chevrolet and Ford were in their respective company offerings. If you started with the Plymouth, the next step up would be the Dodge, and similar to Ford moving up to Mercury and Chevy buyers moving up to Pontiac. 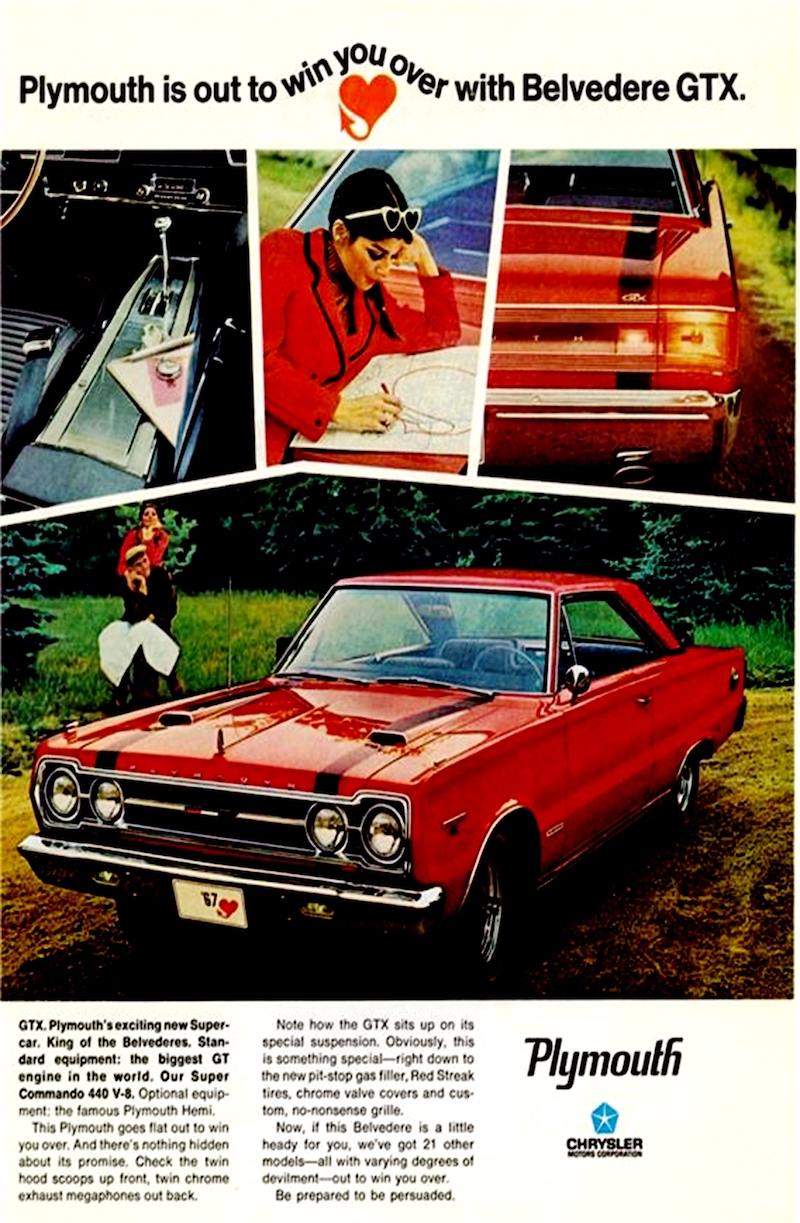 This Plymouth advertisement promoted the brand’s powerful GTX back in 1967. With either a 440 or 426 Hemi under the hood, it was a big success. (Fiat Chrysler)

However, one thing about Plymouth and Dodge we all have to remember is its sibling likeness more so than difference. Even back in the 1960s, the Plymouth and Dodge models were just about identical twins, especially from 1965 onward. A good example was the 1967 muscle cars GTX and R/T both with either 440 or 426 Hemi engines. Even the Satellite and Coronet in non-muscle car dress were popular as other than the badges and some front and rear style differences, they were identical as both offered the same engines from slant-6 to the V8s.

Plymouth’s history dates back to 1928, when the first Plymouth rolled off the assembly line. Through the years, we’ve grown to enjoy all those special Plymouth models, from Savoy to Belvedere to Road Runner to GTX and even the Prowler.

The person responsible for bringing Plymouth to the market was Walter Chrysler himself, who knew a low cost entry level automobile would help build consumer awareness of his Chrysler Corporation. Although Plymouth never became a huge seller, it did compete well with Ford and Chevy, especially those who were shopping the entry level marquees. Plymouth’s best year was 1973, when 750,000 were sold.

However, the soon to follow oil crisis nearly ended Chrysler Corporation, but thanks to a few decent models in the early Eighties and a little “nudge” from the U.S. Government with some bankruptcy saving bailout monies, Chrysler persevered and then enjoyed an industry smash hit with its all-new and novel Plymouth Voyager and Dodge Caravan minivans in 1983. The Plymouth brand lived on until the late 1990s, when Neon, Breeze and “hot rod” style Prowler made up the automobile offerings along side the still popular Voyager minivan.

Plymouth fans will surely remember Plymouths from the Fifties, like the Cranbrook Business Coupe, the 1957 Sport Fury and perhaps the huge finned 1959 models. How about the 1961 Plymouth Valiant? It was a success right from the start ad sold well with sibling Dodge Lancer. These compact models came to market to compete against Ford Falcon, Rambler American, Chevy Corvair, and Chevy II small car favorites.

The 426 Street Hemi engine, which developed 425-horsepower in street tune, became available to consumers in 1966. The Hemi cars would go on to collector immortality, and today generates some of the highest bids at auctions like Mecum and Barrett-Jackson. (Fiat Chrysler)

In 1962 Plymouth and Dodge played a major role on the street scene with its 413 Ram Induction 2-door Savoy and Dart models that turned into terrors on the nation’s drag strips. When Ford came out with the 427 Thunderbolt Fairlanes, Plymouth released just 55 1964 Savoy Lightweights Code A864 that featured lots of aluminum, thin fiberglass here and there, and the new 12.5 compression 426 Hemi under the hood for drag racing only.

Then in 1965, as per NHRA rules, Plymouth built 102 and Dodge 101 special Code A990 race Hemis improved over the ’64 model. The A990s featured Corning lightweight glass, aluminum heads, bigger cam and better exhaust. Then in 1966, the 426 Street Hemi was under the hood of some Belvederes, Satellites and Coronets and headed for performance car immortality. By the end of 1966, if you weren’t running an altered wheelbase car and at least considering nitro as a fuel source, regardless of make, you were behind the soon booming funny car curve.

At the box office, car-loving moviegoers should recall Chris Farley and David Spade as they saved the “Callahan Company.” They motored across America in a metallic B5 blue 67 GTX Convertible selling brake pads in the hit “Tommy Boy.” Also popular was Steven King’s “Christine,” the horror flick we’ve spoken of before that centered on a really evil 1958 Plymouth Fury.

On the nation’s oval tracks, Plymouths, including the winged Superbird, were big winners thanks to the 426 Hemi engine and drivers like Richard Petty on the NASCAR circuit. So, from nitro funny cars to NASCAR, Plymouths were always a big part of the racing equation. Unfortunately, regardless of all this success, Plymouth was a doomed brand. 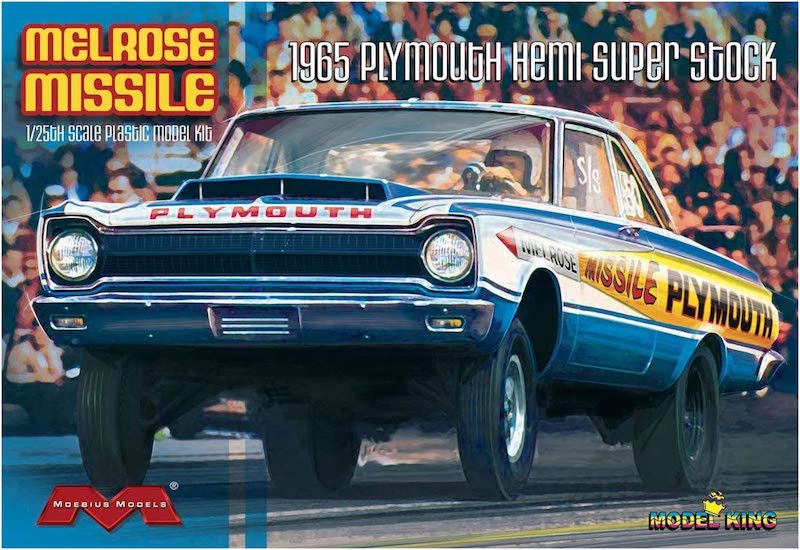 The early Hemi cars were part of the funny car evolution and popular with model builders to this day. Shown is a model of the famous 1965 “Melrose Missile” Plymouth. (Moeibus Models / Model King)

Personally, I remember my father’s first “good” used car, a 1955 Plymouth Savoy 4-door, light green, that he purchased when he got a new job in the newspaper industry in Vineland, N.J. back in 1957. We put a lot of miles on that Savoy, which was powered by an inline-6 flathead engine. My first ever muscle car was a 1967 Plymouth GTX 440, purchased or $2,995 with 1,500 miles on the odometer in April of 1968. I owned the GTX for a short time until Uncle Sam called in early 1969 and off to Ft. Jackson, SC, I went as a member of the U.S. Army National Guard.

Today, Plymouth joins DeSoto and Imperial on the Chrysler model “suspended” list, although in the car business resurrections are rare but do happen.

On June 28, 2001, the last Plymouth rolled off the assembly line in Belvedere, Illinois. It was a 2001 silver Neon 4-door purchased by a Chrysler executive, and that was the end of Plymouth. So, whenever you see a 2021 Dodge Hemi Challenger driving along the freeway, it’s as close to what a Plymouth Barracuda would have been in the modern era.

Thanks for your letter.