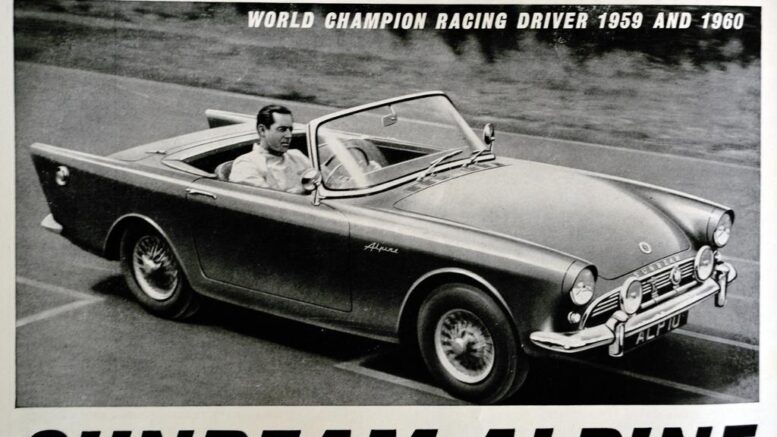 The best known of the Rootes Group Motorcars in the United States was the Sunbeam Alpine sports car. Rootes acquired Sunbeam in 1937 and its two-seater sports cars to this day are prized possessions, especially the Shelby inspired Ford powered Sunbeam Tiger. Shown here is Formula 1 Champion Jack Brabham in a Sunbeam Alpine, which won its class at the 1961 24 Hours of Lemans. (Compliments former Rootes Motorcars.)

Q: Greg I graduated high school in 1969 and my father was always interested in cars and did most of his own car care. We were a family of six and all of our cars were practical. I remember we had a car called the Hillman Husky and it was a bare bones vehicle that I think had a manual transmission. My dad’s goal was getting good gas mileage and I remember the Hillman wasn’t a well-known brand. 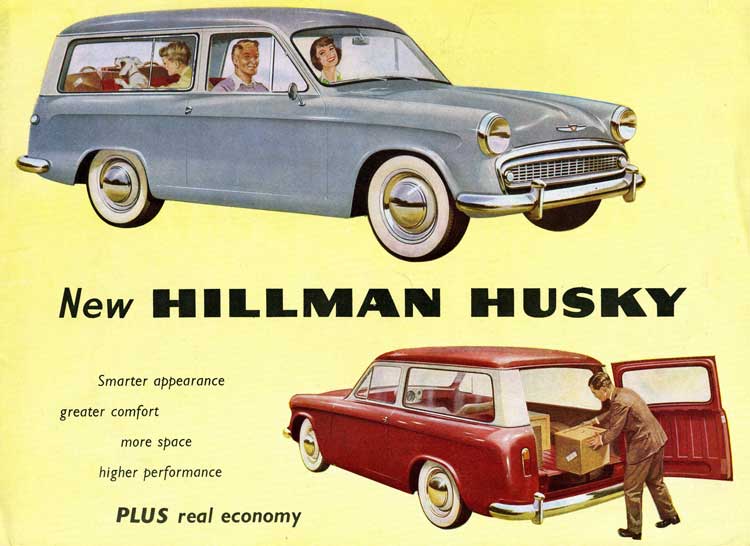 The “Double Duty” Hillman Husky that reader Joanne Charles father owned was most likely the second generation Husky that went on sale from 1958 to 1965. It was a bit larger in wheelbase and had a sportier new design. Known for good fuel mileage and low cost, Hillman vehicles were gaining in popularity, as was its sibling sports car, the Sunbeam Alpine. (Ad compliments former Rootes Motorcars.)

I have good memories of this time in my life and any info on Hillmans is appreciated. I read your articles in the Press Enterprise every week. Thank you, Joanne Charles, Bloomsburg, Pa.

A: Joanne thanks for your hand written letter and yours is the first I’ve received asking for info on the Hillman.

Hillman was part of the large Rootes car manufacturing company, a well-known British manufacturer operating near Coventry, England. Dating back to building its first cars in 1907, they are best known for auto manufacturing and especially its low priced Hillman and sporty Sunbeam two-seater. Chrysler and then Peugeot took over later in Rootes history before its final models in 1981. Most of the cars were sold in Europe, but Rootes to this day is respected as a quality manufacturer during its heyday and did impact North America on a positive note.

The Hillman Husky your dad owned was a nice little station wagon produced from 1954 to 1970 in three distinct generations. And, being that you remember your dad’s Hillman Husky, there’s just a small chance he owned one of the first generation Huskies called the Mark I that was built on the popular Hillman Minx car chassis.

These cars debuted in 1954 and ended the generation in 1957 riding on an 84-inch wheelbase with a curb weight of just 1,904 pounds. It was a three-door estate design with two side doors and one large rear door that opened sideways. Powered by a fuel efficient, 35-horse inline-4 cylinder engine of just 77.2 cubic inches, I’m sure when loaded down with kids and cargo it didn’t set any acceleration records. It came with a 4-speed manual transmission as the only gear changer available. 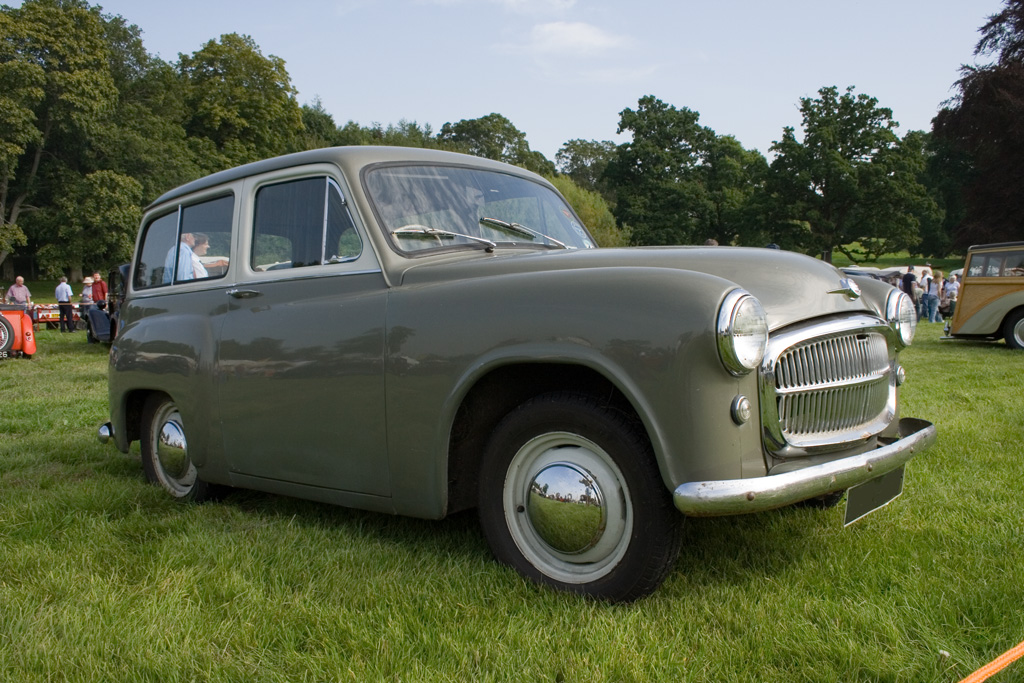 The 1954 Hillman Husky arrived on American shores too much interest. It was a compact car by 1950s standards and unique in its utility wagon presentation. It produced just 35-horsepower from a 77.2 cu. in. inline-4 engine. Photo by Kieran Turner)

In 1958, Hillman released a new Husky that would go through three stages. The first of the second generation Husky was simply called the Series 1 and was again based on its popular Minx chassis. Although still a small station wagon, the new Husky grew in wheelbase to 86-inches and the curb weight now exceeded one ton at 2,072 to 2,100 lbs. depending on the trims that became available.

The Husky engine also got a tad larger, now measuring in at 86-cubic inches and developing 51 horsepower. The exterior design was more modern, especially in the front fender treatment and an all-new front grille design. Sold through 1965, I’d give strong odds that this is the version you had in your driveway back then. In 1960, a Series II was added to the lineup with more engine compression resulting in zero to 60-MPH times just below 30 seconds! Finally, a Series III arrived in 1963 with a 97.1 cubic inch engine, 4-speed synchromesh transmission and some styling tweaks to the front end.

The final and third generation Hillman Husky arrived in 1967 and lasted until 1970. This time, it was based on the smaller Hillman Imp chassis with the wheelbase shrinking to 82-inches and the curb weight dropping to 1,652-lb. The engine, too, was a smaller inline-4 cylinder of just 53.4-cubic inches and 42-horses hooked to a 4-speed manual. All of these Hillman Husky trims were four passenger vehicles, got good fuel mileage and had a top speed somewhere in the low 70-mph range.

The main Rootes Export Division was perhaps best known for its Hillman and Sunbeam Alpine sports cars with regional import offices in New York City and Los Angeles. Following a British Car Show in New York organized by William Rootes in 1950, they signed up many American dealers and sales to consumers shot to $169-million from 1951 to 1956 and then up to $303-million from 1957 to 1962. The Rootes family hard work paid off as in 1959, 27,000 Hillmans were parked in American driveways. 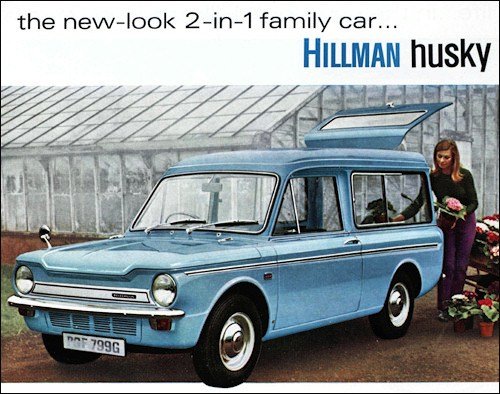 The final third generation of the Hillman Husky was based on the sub-compact Hillman Imp chassis. It weighed only 1,652-lbs. and was powered by a 53-cu. in. inline 4-cylinder. (Ad compliments former Rootes Motorcars.)

Hillman and Sunbeam were both popular in North America, but when Chrysler Europe took over Rootes in 1967 to 1970 via agreed on stock takeover purchases, sales in the states declined. Emphasis was more on the European market while the U.S. government was making it more difficult for foreign cars to adapt to clean air mandates, safety enhancements and other EPA rules.

And as for the Sunbeam 2-seater, a Carroll Shelby led effort fitted the Alpine with small block Ford V8, renamed it the Sunbeam Tiger, and Rootes brought the beauty to the U.S. market from 1964 to 1967. Chrysler ended the Tiger effort when its 273-inch small block wouldn’t fit in the engine bay. (But that’s a story for another day.)

Hope this all helps and thanks for your letter, Joanne.

(Greg Zyla is a syndicated auto columnist who welcomes questions and comments on collector cars, auto nostalgia and motorsports at greg@gregzyla.com or at 303 Roosevelt St., Sayre, Pa. 18840.)