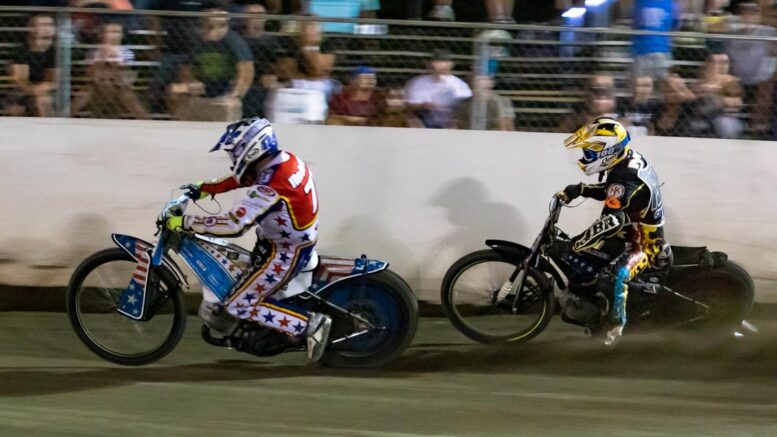 In an abbreviated season due to the COVID 19 and an early gloomy outlook, Champion Speedway is thriving since getting the okay to open four weeks ago from County Officials. The racing has been excellent and aside from a rainout on week one, the weather has been cooperative.

Saturday, Aug. 1 was no different as riders lined up for the Omar Lightner Cup, which celebrates the life of the former Vestal, N.Y. police officer and track worker. The weather was great and the racing was top notch as racers also competed for RD 2 of the USSGP, the qualifying system for the end of the year US Open Championships.

Dave “Smokin” Oakden, who has been very consistent, started the evening off with a win over Jesse “Jet” Diem, “Flyin” Brian Hollenbeck, and Dalton Oakden. Last week’s winner, “Sideways” Spencer Portararo, who all eyes have been on lately, won handily in the second heat ahead of Corey Brookes, Alex “Hazard” Heath and Mason Higely.

In Round two it was again Oakden, McBride and Portararo taking the full three point with strong second place points being awarded to Diem, Hollenbeck and Cortese.

McBride kept the streak going in the third round staying ahead of second placed Heath. Oakden suffered his first loss at the hands of Portararo and Brookes took a checkered from Harman.

Portararo stayed on the gas to claim his last heat race while Harman snatched two more points. Hollenbeck and Diem then had a great race in which Hollenbeck won. 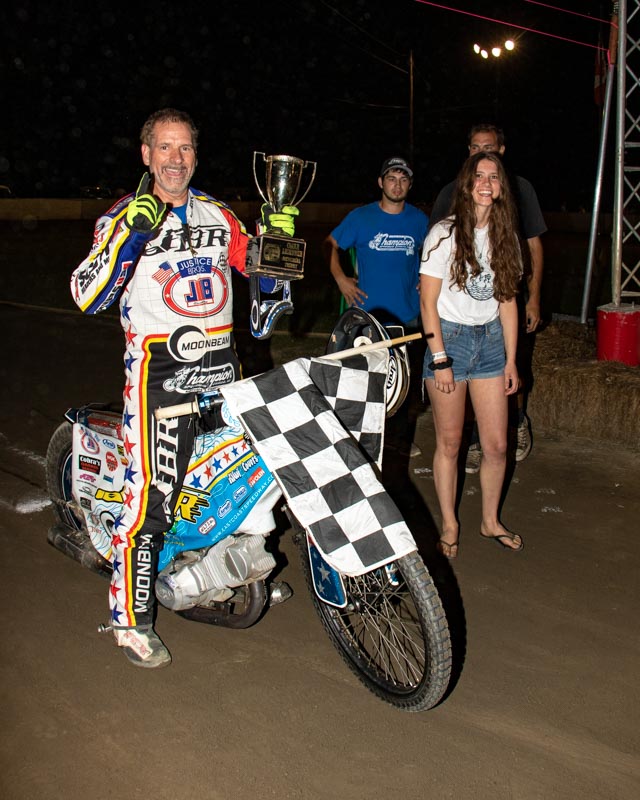 The heats were closed out with one of the best battles of the evening. Oakden made the gate on McBride and led for a couple laps until McBride began using the outside dirt line and gained. On the final lap, the two raced for the flag with McBride getting the drive in the dirt to overtake Oakden, but not by a lot much to the appreciation of the crowd.

Dalton Oakden made a nice start and rode a smooth line to win the C Final although he had some solid pressure from up and coming Towanda, Pa. star, Mason Higley. Cornell was third and Heath was out with an elbow injury.

The B Main also served as the last chance with the winner getting the final berth in the A Main. Diem and Hollenbeck would have a super battle side by side for much of it with Diem getting the edge. Cortese rode very well for third with Brookes fourth.

McBride and Portararo were tied for the overall points lead with 12, and McBride won the ball selection for first choice of gates. He would choose the gate 5 position. Portararo would take gate 4, with Oakden selecting 3 and Diem 2. Harman was left with the inside.

McBride blasted off the line on his Jawa and swept around the field into the lead. What was interesting behind him was that Portararo, who looks to be the fastest rider back East this season in terms of pure speed, locked it up and parked it, almost stalling the bike, and got stuck way behind in last place!

McBride kept up a steady pace in the lead while Diem was in hot pursuit for several laps. Oakden was solidly holding down third, but at the back Portararo was moving at an insane speed on the outside and was starting to gain on the field. On the last lap he literally went from dead last up to second round the final corner way out in the dirt and came up hard on McBride at the line while passing Diem for second!

He could not quite overtake the veteran star though, and McBride would win what would make him, what is believed to be, the first East Coast Rider to win a Main Event in five different decades.

Eastern Legends, Gene Bonsignore and Warren Diem both made Main Events in five different decades as well, which is also impressive, but Lenny McBride shows no signs of slowing down soon.

Champion Speedway is back in action on Aug. 8 and 15 before taking a one-week break on Aug. 22.