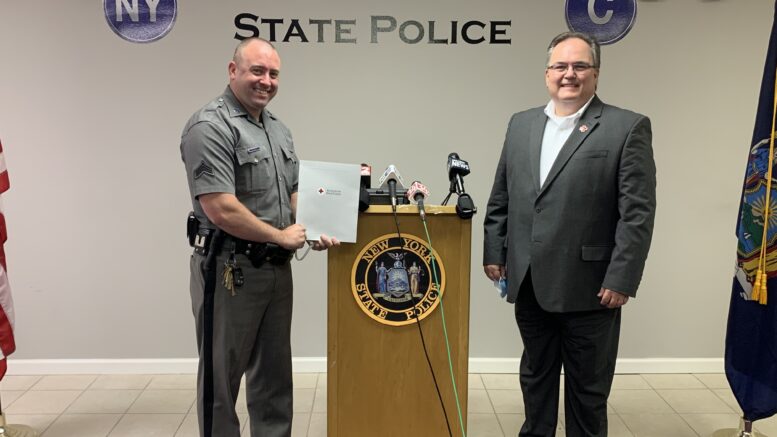 The American Red Cross recently honored Sergeant Robert J. Bloom for his heroic and life saving efforts. Bloom was in his personal vehicle on Nov. 1, 2019, in an off-duty capacity, and was driving to the Broome County Police Academy graduation when he observed a large plume of smoke and quickly recognized that a home was on fire in Apalachin, N.Y.

Emergency personnel had yet to arrive. Sgt. Bloom observed two men standing in a driveway; Gary Zisko, the owner of the residence, and neighbor John Welch. Zisko’s wife Bonnie and son Jeffery, who is bedridden, were still inside.

Sgt. Bloom, Gary Zisko and John Welch entered the structure, located Bonnie and urged her to exit the house and carried Jeffery to safety.

For his heroic and lifesaving actions, Sgt. Bloom was presented with the American Red Cross Certificate of Extraordinary Personal Action in a ceremony held on July 30, at New York State Police, Binghamton.

In a press release, Jay Bonafede, spokesperson for the American Red Cross, wrote, “The Certificate of Extraordinary Personal Action is presented to individuals who step up in an emergency situation and help save or sustain a life. These individuals exemplify the mission of the American Red Cross to prevent and alleviate human suffering in the face of emergencies. They are to be commended for their willingness to help others in distress.”

Area residents can go to LifesavingAwards.org to nominate and recognize an individual or group of individuals who have used the skills and knowledge learned in an American Red Cross Training Services course to help save or sustain a life.