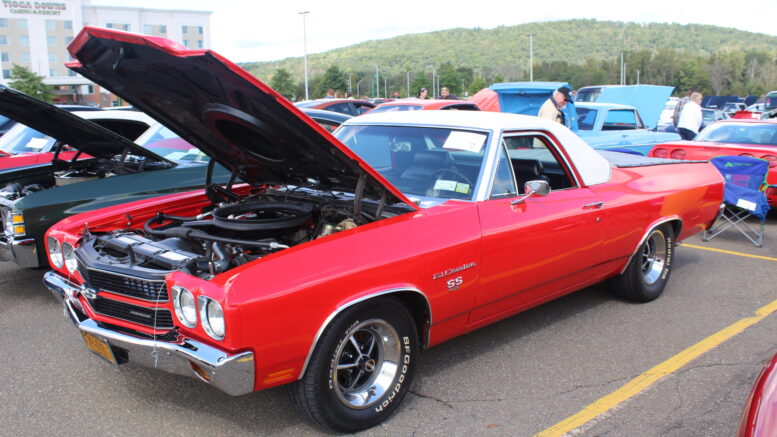 The 1970 El Camino SS454 LS6 is perhaps the most popular El Camino ever built. Producing 450 horsepower it is one of the most desirable muscle trucks that brings big dollars at Mecum and Barrett-Jackson auctions. (Greg Zyla photo)

Q: Hi Greg, I read a lot about the muscle cars of the 1960’s and am wondering about the history of the Chevy El Camino as it relates to drive trains and engine horsepower. Can you give some history? Thanks and any other info on the El Camino line is appreciated. Ernie W., Danville, Pa.

A: Ernie, I’m happy to help. And I’m going to include a little bit of Ford Ranchero information as a comparison because the Ranchero was El Camino’s main competitor.

The first Chevrolet El Camino appeared in 1959 and was assembled on the Chevy Brookwood 2-door station wagon chassis. It comprised of BelAir exterior trim and a Biscayne interior. (Compliments Chevrolet)

The El Camino began with its first generation that only spanned two years of 1959 and 1960. Then, after a three-model year layoff, Chevy came back with the intermediate size El Camino from 1964 to 1987, including generations two through six. Both the El Camino and Ranchero are classic “car/pickup” vehicles, and both become more popular with collectors as the years click by.

When introduced in 1959, Chevy’s new “half-car/half-truck” had a good first year of sales. Built on the 119-inch wheelbase 2-door Chevy Brookwood station wagon chassis with BelAir livery outside and a Biscayne interior, Chevy surprised Ford’s ’59 Ranchero with better overall sales of 22,246 to 14,169, respectively. Considering Ford’s first Ranchero came out in 1957 and sold well at 21,706 vehicles, it surprised everyone who followed this novel car / truck market. 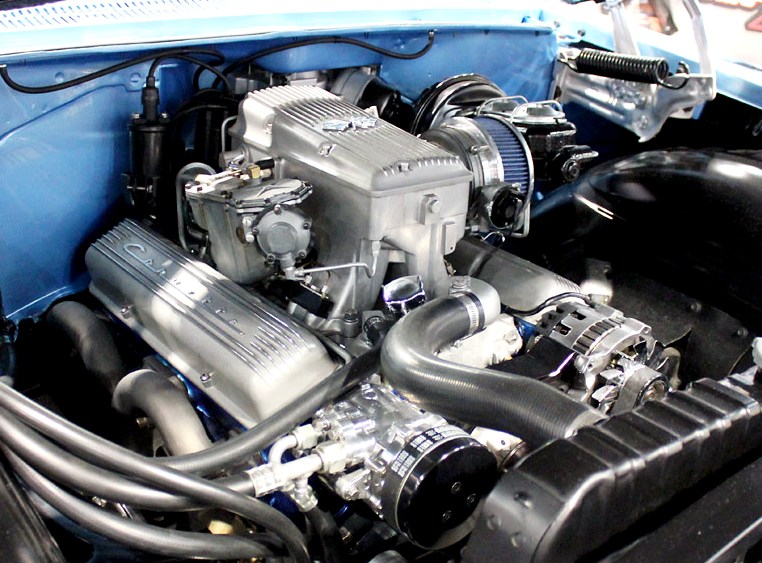 Numerous engines were available in 1959, from six-cylinder to a 348-inch big block with three two-barrel carbs. However, most rare is this 283 fuel injected engine putting out 290-horsepower. (Compliments Chevrolet)

As for the engine and drivetrain combos on that first ever ’59 El Camino, there were many to choose from. Included were three engines including the standard 135-horse, 235-inch Stovebolt inline-6, while optional were two V8s ala the 283 small-block V8 or the powerful 348 big-block V8. Numerous V8 versions were available, with the tri-power three two barrel 348 its highest power producer at 335-horses.

However, most notable for ’59 was the different 283’s a consumer could order. The small block 283 was offered in a 185-horse two-barrel version, followed by a single four barrel at 230 horses. Next was a rare dual-quad two four-barrel 283 putting out 270 horsepower. If that wasn’t enough, how about a 290-horse fuel injected 283? Yes, four different versions of the popular small-block. These engine options made the ’59 El Camino very special as the fuel-injected version is very rare, as is the dual-quad 283. Both bring very good money at the national car auctions.

The 1960 El Camino, however, completely stunned the auto world as its sales plummeted and ended up in a reversal of the prior year. Ford turned the tables as they went from full size to the new, very small Falcon-based Ford Ranchero at a much lower price. The El Camino sold just 14,163 units versus the Falcon Ranchero’s 21,027 number. The engines were similar in ’60 although the fuel injection versions were gone. An economy six at 110-horses joined the power list.

Unlike Ford, which continued production on many platforms through 1979 and seven generations, Chevy did not make an El Camino in 1961 to 1963 fully aware of Ford’s downsizing success with its new Falcon Ranchero. Most felt Chevy’s decision to pull the full-size El Camino from production was due to the poor 1960 sales, while others say that Chevy was simply retooling to bring El Camino back as a Chevelle intermediate. Turns out the retooling insiders were correct. 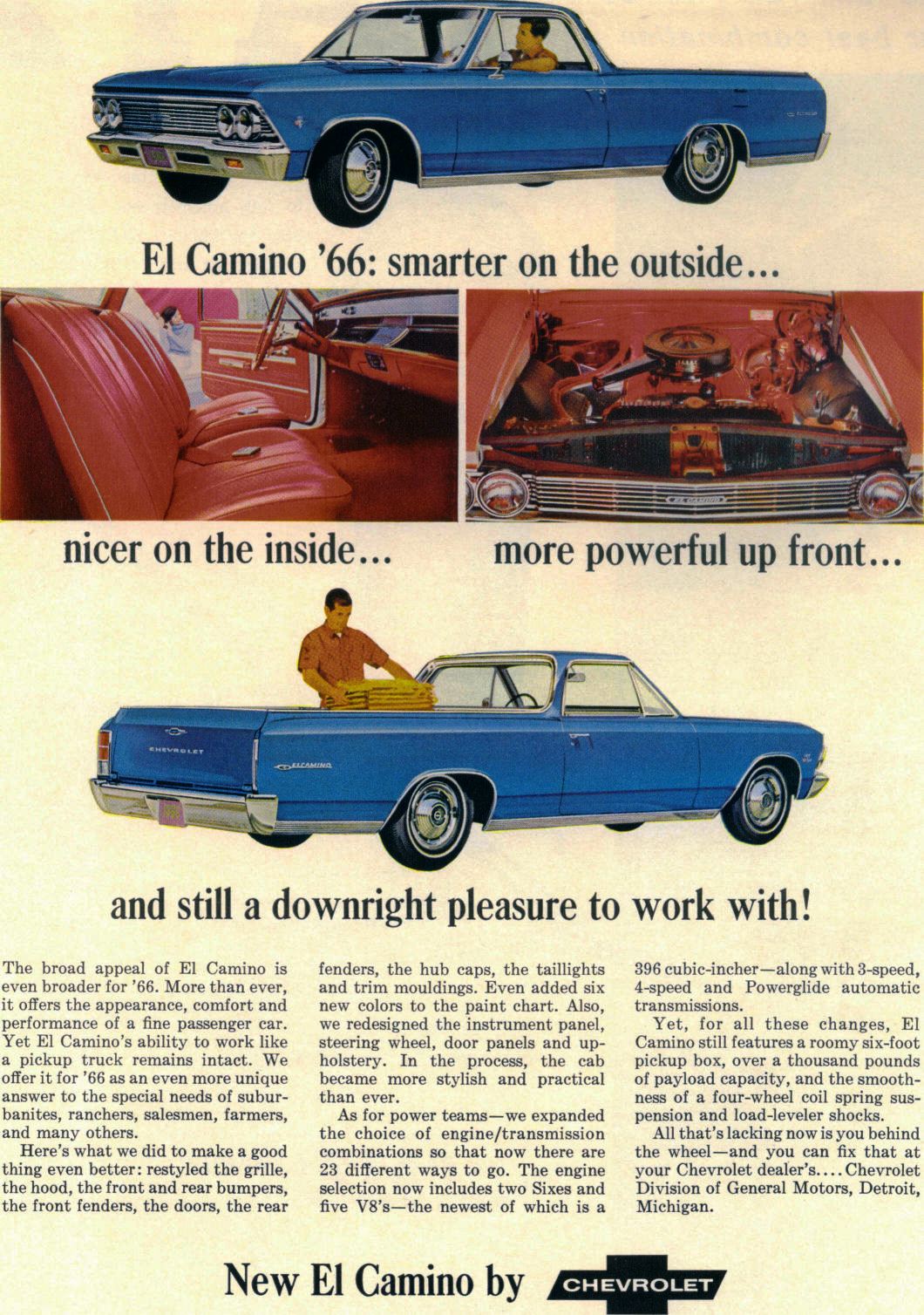 Although the 1966 El Camino was not an official SS model, the three 396 engine options of 325, 360 and 375 horsepower were available minus any SS badges. It was the beginning of the most popular muscle car years of the decade, and these El Camino car style pickups were major players. The first official El Camino SS396 appeared in 1968. (Compliments Chevrolet)

Chevrolet re-entered the car/truck market with its new 1964 El Camino based on the intermediate Chevelle line and competing now with Ford’s new intermediate Fairlane based Ranchero.

As for the muscle car engines and transmissions, the 327 V8 took over as its top power maker when the El Camino returned in 1964. The 300-horse 327 was available, and other engines included the 283 up to 220 horses and the inline-6 in 194-inch, 120 horse and 230 inch, 155 horse. In 1965, the engines were similar and transmissions included manual three and four speeds and powerglide automatics.

Things really moved forward concerning the El Camino beginning in 1966 right on through 1970. The ’66 and ’67 396 El Caminos were sibling to its Chevelle coupe SS396, including all of the powerful big blocks but without official SS badges. In ’68, Chevy officially released an SS396 El Camino and these El Camino models are popular attractions at the car shows and area drag strips. My favorite is the 1970 El Camino SS454 with 450 horses connected to either a Turbo-400 automatic or Muncie 4-speed.

Overall, Chevy’s El Camino outlasted the Ford Ranchero by quite a few years, with the Ranchero ending in 1979 while the El Camino and its sixth generation lasted until 1987. For the record, my favorite Ranchero is the 1968 Torino-based 428 Cobra Jet.

So there you have it Ernie, the Chevy El Camino history in less than 1,000 words. Thanks for your letter.