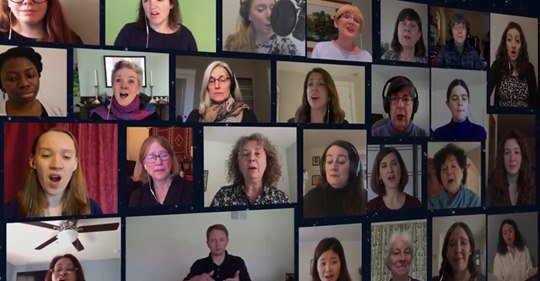 Pictured is a screenshot from the Mendelssohn Club’s performance of Roots. You can view the production at www.youtube.com/watch?v=22-NPzetHPw. Rachele is pictured fourth from the right in the screenshot, and second row from the bottom.

Rachele Armstrong grew up in Sayre, Pa., the daughter of Scott and Philomena Armstrong. Attending Epiphany School and then moving up to Notre Dame for High School, Armstrong had her sights set on the arts.

But like everything else, her aspirations during the pandemic presented some challenges; challenges that her current choir, the Mendelssohn Club, one of the oldest in the country, pulled off.

With two concerts scheduled this year, the first being held on March 7, and in celebration of Beethoven’s 250th birthday, the coronavirus pandemic hit before the second concert, set for May, rolled along. The choir’s members, however, remained determined to pull it off, and were able to do so thanks to John Leonard, the acting artistic director for the 100-member choir.

According to Armstrong, and during a phone interview from her Philadelphia area home where she now resides with her husband Mark, Leonard’s idea would allow for all members to create a video of a selected piece at home, and then a producer would put things together for them. The selection for the second show was “Roots”, by composer Ola Gjeilo.

“We were given rehearsal tracks and instruction,” explained Armstrong, who noted that the 3-minute song took her two weeks to learn and perfect, and then an hour to record.

The result, in the end, was a virtual choral performance by the Mendelssohn Club with 65 members participating. The show, which quickly rose to over 4,000 views on YouTube and Facebook, was nothing less than breathtaking. It was also a sign of the times for the arts and entertainment industry.

Armstrong explained that since the shutdown, the members of the choir have continued to call and talk to each other about the future of the arts.

“We’re using this as an opportunity to make things better,” Armstrong added, noting that the possibility of an in-person rehearsal and show is much further into the future; and even when things reopen for Phase 4, the phase that includes mass gatherings.

“In the arts realm,” said Armstrong, “[live entertainment] was one of the first to shut down and will be the last to open; especially choral singing. The virtual performance was a new aspect and a great way to keep things going. But it will still be awhile.”

As a soprano carrying tunes into a soft falsetto, Armstrong began her artistic journey while growing up in Sayre.

Starting at Epiphany with the choir and band, Armstrong also took private piano lessons with Joan Kutcha, and then vocal lessons with Belle DeLill. In 2006 she graduated from Ithaca College with a degree in music performance and education.

The future became an artistic journey for Armstrong as she moved on to Glimmerglass in Cooperstown, N.Y. and eventually to New York City, where she worked with IMG Artists and Carnegie Hall.

Eventually Armstrong married Mark Battaglia and moved to the Philadelphia area. With a set of grandparents from that region and another grandmother, Hila Whitman, now of Owego residing in that area, Armstrong described her move as a homecoming of sorts. Up until December she was working with the Philadelphia Orchestra; now she is working in the human services field, but has continued on with the choir.

However, things today are quite different.

Hard hit Philadelphia, Pa. led to a tight shutdown, much like others in the Tri-State region. Armstrong, on lockdown at the time of our interview, said she is really missing live concerts, going out to eat, and her chorus rehearsals. She was happy, however, when restaurants in her small hamlet of Media began opening for outdoor seating on June 5.

Chuckling, Armstrong stated, “Prior to that we could buy wine at grocery stores, so we weren’t totally lost. Wegmans was my lifeline.”

Armstrong’s family also grew during the pandemic; fur family that is.

As a volunteer for Providence Animal Center, Armstrong and her husband somehow ended up with a couple of new feline additions to her household. After losing her cat Frida in March to cancer, the couple was looking to adopt and soon found Sebastian.

On March 22, however, a sign was put on the animal care center’s door that they were shutting down because of the pandemic, and that foster homes were needed immediately. So the next day they picked up Atticus.

Now they have three cats, and it’s not all bad.

“It’s been good for the cats to have us around,” said Armstrong who, along with her husband, has been working from home.

“If we can’t go see people, at least we have these beautiful creatures around us,” she added.

One can only wonder if the cats interfered with the sheet music, lounged about on the keyboard, or even batted the computer mouse around a few times during the production of “Roots”; a production dedicated to the memory of Sarah Bachman Krieger and Forrest Glass.

You can view the production on YouTube, at www.youtube.com/watch?v=22-NPzetHPw.

Be the first to comment on "‘The Show Must Go On’"