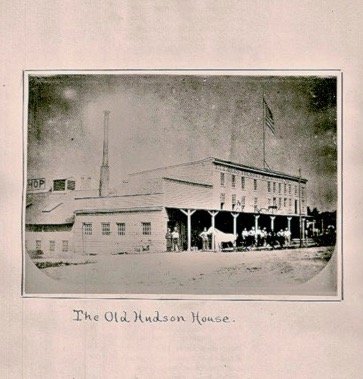 Pictured, is The Hudson House that was once located at the southeast corner of North and Temple streets and over Dodd’s Pond, which extended as far as to where the “pit” is today. Provided.

We all know the village of Owego is loaded with history, and much of it is focused on the Front and Main Street areas; but in its own right, North Avenue has a lot to tell and it’s best to take it one block at a time.

One of its most interesting blocks is the area bounded on the west side of North Avenue, north to Fox Street and west on Temple and north on Central Avenue.

To begin, can you picture a large pond, instead of where the Owego firehouse, the little barbershop and “the pit” are located today? Well, back in the 1860s there was a large body of water that covered at least three fourths of that area known as Dodd’s Pond.

As a matter of fact, the southwest corner of the pond constantly leached west, down Temple Street, notably on the north side causing flooding and all the problems that went along with it. The pond must have been there at least since the 1840s, because on an 1847 map by John R. Drake, Temple is called Canal Street. 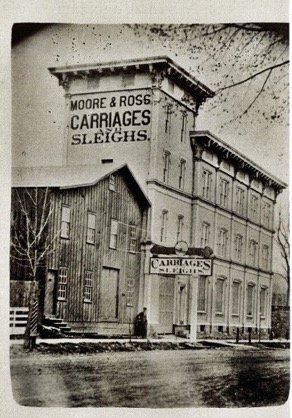 Pictured is the Moore & Ross Carriages and Sleigh business that stood on North Avenue and near the site of Dodd’s Pond. Provided.

According to L. W. Kingman’s book, Early Owego, the land from North Avenue to Central Avenue was like a deep ditch and required a lot of filling to bring the surface up to the level with the rest of the street.

On the southeast corner of North Avenue and Temple Street, across from the Presbyterian Church, stood a three story wooden hotel called the Hudson House, built in 1851 by Col. Jacob Edwards who came to Owego from the Hudson Valley area. It had a large porch on the front and the back of it was built right over the water, supported by long, heavy poles.

Two platforms extended over the pond to enable firemen access to the water in case of a nearby fire. Although the pond was totally covered by a small-leaved plant, local children laughed and splashed on homemade rafts in the summer and ice-skated on it after it froze over in the winter.

As the years passed, the Hudson House changed ownership a number of times, as well as the managers. It wasn’t long before it was known as an unsavory, seedy place. In fact, one of its landlords was arrested for counterfeiting while there.

After it ceased doing business as a hotel, the first floor was used as a blacksmith shop and a storeroom in connection with the iron works factory next door, and was in gross disrepair. It reached a point that it was feared someone might find it amusing to set it on fire, so it was torn down in 1875 and other businesses quickly took over the prime location. But before new buildings went up, the sites had to be filled in because of the wet conditions from the pond, and in time, the pond dried up.

There were several homes and businesses that surrounded the block, especially on Central and Temple Streets. Sawmills, gristmills, iron works, wagon factories and more; and of course, there were the ever-inevitable fires.

Lyman B. Truman was one of the businessmen who operated a saw and lumber mill on Central Avenue; but not only that, in 1893 he had a beautiful home built almost across from the mill where he resided until he retired in 1918. It was later converted into an apartment house and fell into disrepair. On Aug. 1, 1994, the former beautiful home at 101 North Ave. was destroyed by fire.

Other apartment buildings went up on that block and when one of them was removed in the 1940s, the E. H. Miller Lumber Company bought the site at 107-109 North Ave. Miller started building the store on May 1, 1949, but on June 11, before it was finished, a heavy rain caused a major setback that resulted in a 25-foot section of the cinder block wall to collapse into a pile of mud and debris.

However, his handsome store was finally built and remained in business until the early 1980s when he sold out to True Value Hardware. True Value was located there until it went out of business in the early 1990s. The building was finally razed in 2002 leaving a large woeful-looking empty space.

Since then, several ideas were suggested to do something about making the site useful once again, but after the 2006 and 2011 floods, the village of Owego adopted flood mitigation standards that prevented the site from being filled in. Also, after an engineering study was completed in 2016, it was determined that because of unstable ground conditions on the former site of Dodd’s Pond, erecting a building or parking garage could not be considered.

Then, because the Village of Owego was awarded ten million dollars through the Downtown Revitalization Initiative in 2017, funding was applied for and granted in 2019 to construct an Art Park at the site. The plans are already underway for it to include an outdoor amphitheater, a flood-resistant interactive sculpture garden, and 24 parking spaces to support surrounding businesses.

The Owego Hose Team also revealed recently that plans are underway to construct a Steamer House directly adjacent to the Art Park. They plan to restore the 153 year-old Owego Fire Department Amoskeag Steam Pumper and display it along with the 1939 Sanford Hose Truck in a cedar wood- frame and glass solarium with a 360-degree view. A steeple will support an antique fire bell, which they expect to be completed in 2023.

After 18 years of being an eyesore, the empty site that had been nicknamed “the pit” will finally be coming to life once again; but more than that, North Avenue will finally be getting her share of recognition of Owego’s history.

Be the first to comment on "A Block of History"