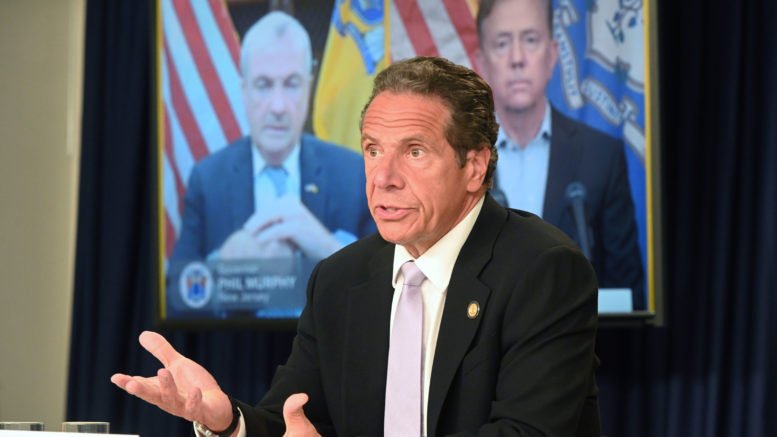 Governor Andrew M. Cuomo today announced that eight additional states meet the metrics to qualify for the travel advisory requiring individuals who have traveled to New York from those states, all of which have significant community spread, to quarantine for 14 days. (File Photo)

New York, New Jersey and Connecticut will continually update and publish on their respective websites a list of states to which the new advisory applies. This information will be updated regularly.

The tri-state measure will use uniform parameters and messaging on highways, airports, websites and social media across the three states. The three states will also ask hotels to communicate the 14-day quarantine to guests who have traveled from one of the impacted states.

You can view the announcement at https://mail.google.com/mail/u/0/#inbox/FMfcgxwJWXVCmCtDrPDBJjjbVRRJjxfl?projector=1.

The governor also announced last week that five regions – to include the Southern Tier – could reopen under Phase 4, which began on Friday and allows low-risk indoor and outdoor arts and entertainment, film and TV production, higher education, and professional sports without fans.

Guidance for Phase 4 of reopening is available at https://forward.ny.gov/phase-four-industries.

The governor also announced that in Phase 4 of reopening, social gatherings of up to 50 people would be allowed as well as indoor religious gatherings at up to 33 percent of the indoor site’s capacity.

“Our approach has been vindicated and the phased reopening based on facts is working,” Governor Cuomo said in a release last week.

He added, “I said from day one that the theory the virus should be handled politically can’t be done. The virus doesn’t respond to political theory – it responds to science and data. We’re going ahead with our metrics and our phased reopening, and five regions are set to enter Phase 4 on Friday. The numbers continue trending in the right direction as we went from one of the highest infections rates to one of the lowest in the country, so we will also allow slightly larger social and religious gatherings, but people need to continue wearing masks, socially distancing and washing their hands frequently to stay safe.”

The governor also updated New Yorkers on the state’s progress during the ongoing COVID-19 pandemic. The number of new cases, percentage of tests that were positive and many other helpful data points are always available at forward.ny.gov.

In Tioga County, the total cases of coronavirus, to date, remained at 152 confirmed cases, 29 individuals remain in mandatory quarantine, 116 have recovered, and the total number of deaths since the beginning of the pandemic remains at 24.

Be the first to comment on "People coming to tri-state area must quarantine, says Cuomo"