As far back as 1917, the Glenn Curtiss Manufacturing Company built the first ever “autoplane” flying car that did get off the ground but never achieved full flight. Curtiss was best known as a successful motorcycle builder / racer and set a world record of 136.36-mph on his homebuilt motorcycle in 1907 at the Ormond Beach, Fla., Speed Trials. (Compliments Curtiss Manufacturing Company)

Q: Greg, I enjoy your columns very much and am a senior citizen now, 73 years old. I remember looking at old magazines from the Fifties and Sixties that said by the year 2020 we would all own cars that could fly. Well, we both know that didn’t happen.

However, I do remember there was once an amphibious car available in the Sixties and am wondering if you could give some info on that seaworthy car? Thanks, James L., Providence, Rhode Island.

A: James although there have been many home made and corporate prototypes built, there has yet to be any type of mass-produced flying car available to the public. Indeed, there are several companies currently involved in flying car development including Terrafugia, Pal-V, Maverick LSA, Moeller Sky Car, CarPlane, and Aero Mobil. However, none of the major car manufacturers are contemplating any flying automobiles to my knowledge. (If I’m wrong, please let me know.) 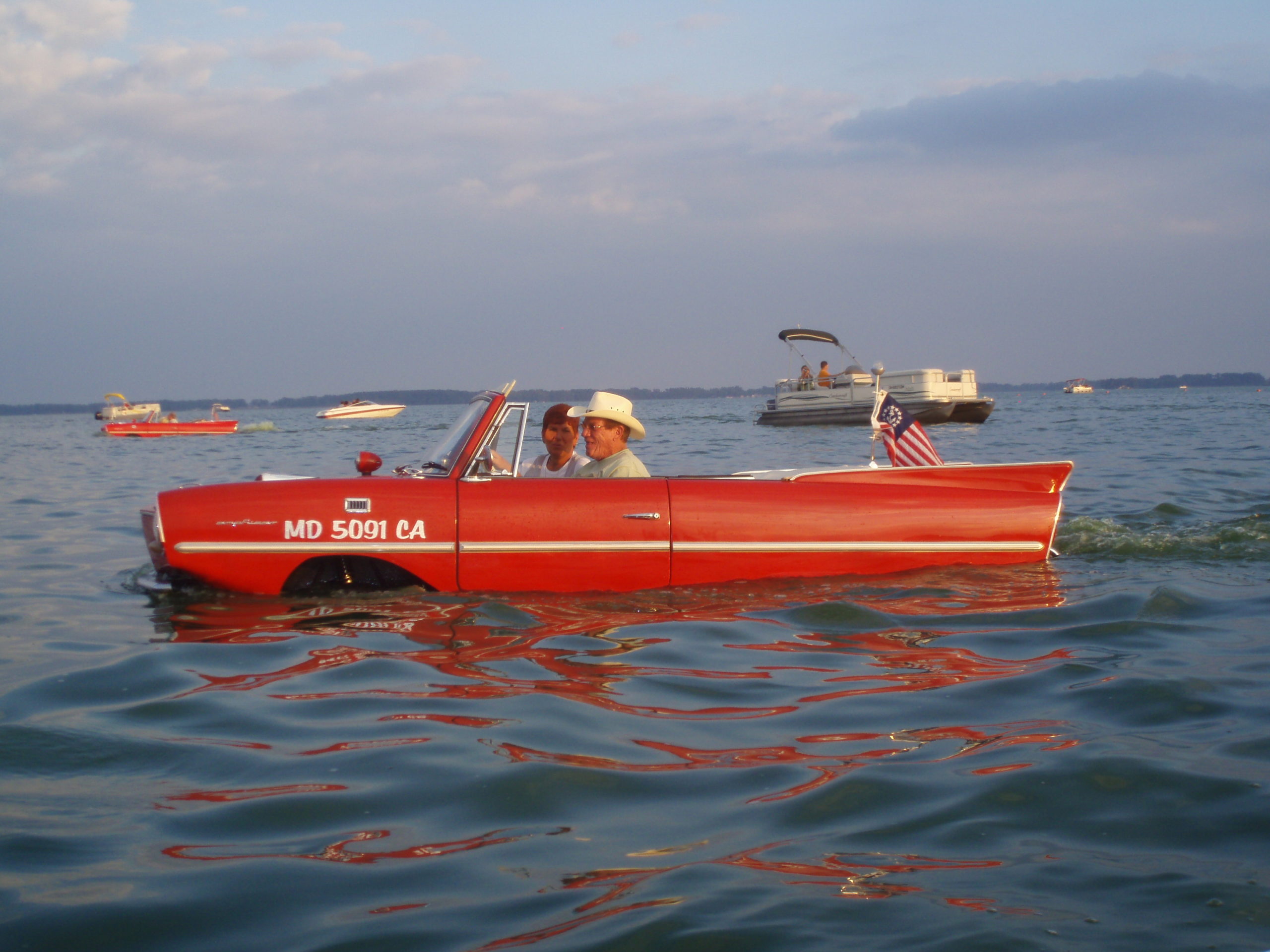 Fred Monger’s Amphicar is a rare breed, and still the only mass-produced amphibious passenger automobile ever built. Fred is shown on the water during a Coast Guard Vessel Safety Check back in 2009. (Photo compliments Fred Monger)

I also remember the same articles you recall about cars that would fly. Most featured stories were in magazines like Popular Science and its sister publication, Popular Mechanics, both of which I am happy to say still exist today. I subscribed to both, as being a car nut they always seemed to have important information and features on cars and trucks. Another magazine I subscribed to was Mechanix Illustrated, as its car author, Tom McCahill, wrote monthly test drive features and he was always my favorite read. He passed away in 1975 but is still respected as one of the best and most entertaining car writers ever to strike a typewriter keyboard.

The many flying car articles always included drawings, but these futuristic cars always looked more like airplanes. A bit of research finds The Economist magazine pretty much putting a big delay on ever seeing a real flying car in an article from 2009 written by Adrian Covert. 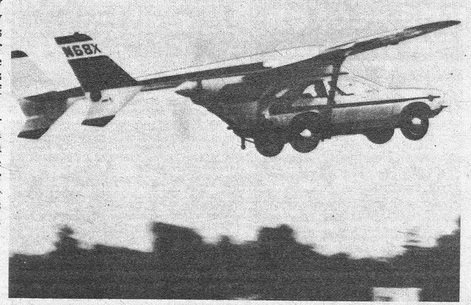 This photo shows the half Ford pinto and half Cessna airplane that eventually killed its inventor, Henry Smolinski and his friend, Hal Blake, on what looked to be a successful test run on Sept. 12, 1973 in Oxnard, Calif. It is one of the few “flying cars” that actually flew at full flight and had made several prior successful test runs until a right wing failure caused the crash. (Compliments Smolinski collection)

Wrote Covert in the July 27, 2009 issue, “Moreover, every such concession made for road safety will detract from its air safety, putting flying cars in a Catch-22 of sorts. Consider also a lack of landing strip space, inadequate air traffic control infrastructure and the potential for major lawsuits, and there’s quite a case against the flying car every truly succeeding. While these are all very real hurdles that will prevent the flying car from going public in the next 10 or even 20 years, I don’t think any of these necessarily kill an industry, which has yet to be born. All of these problems can potentially be solved with advances in tech over time. So the waiting, (agony!) will continue. But don’t count out the flying car quite yet.”

With respect to the current flying car developments, Covert may be correct about flying cars one day in the future. However, I still believe the current experimental flying cars will always be categorized as airplanes that will fold up, fit in your garage and be street legal. (Please see the attached photos for more information on past and present flying cars.)

Now we switch gears to the amphibious car you ask about. 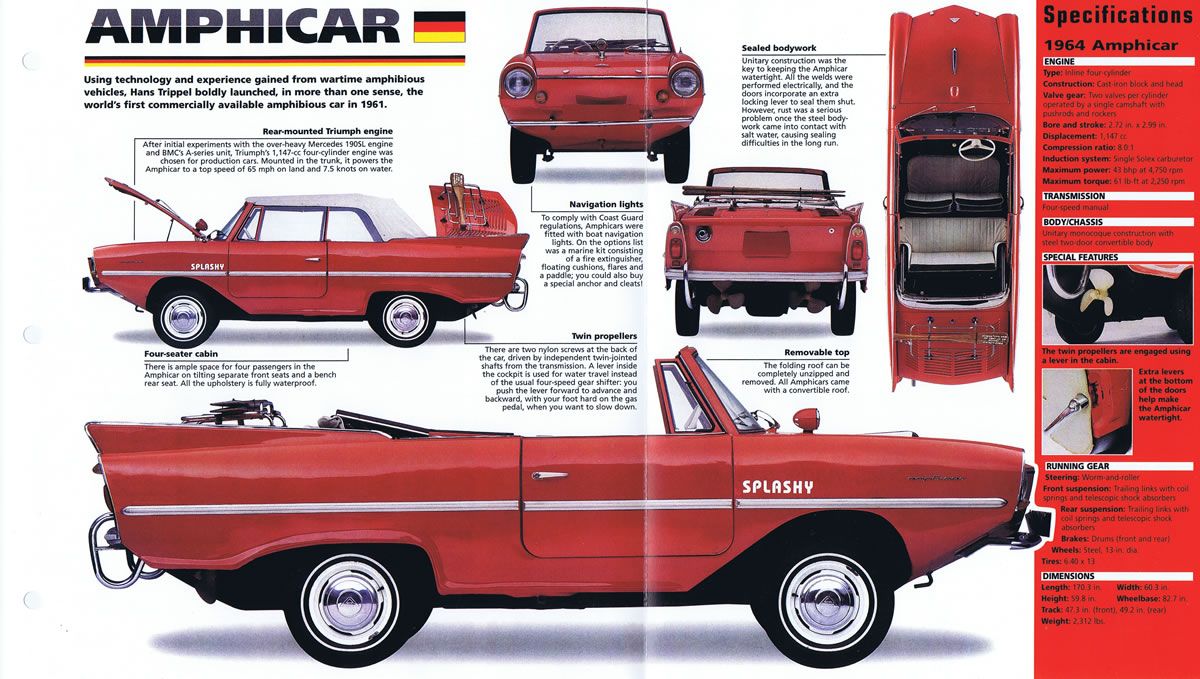 Advertisement for the German built Amphicar, available from 1961 through 1968 with over 3,000 sold in the United States. (Compliments former Amphicar Company)

About 11 years ago, I received a nice letter from a reader by the name of Fred Monger from Lusby, Maryland. Fred is (and hopefully still is) the proud owner of a real land / sea car called the Amphicar, and he sent along photos.

Most of us baby boomers remember the Amphicar, which for seven years was the only consumer available, land and sea vehicle ever mass-produced and imported for sale in the United States. Fred noted that car enthusiasts might remember seeing the seaworthy car on TV, in print ads and in Hollywood movies like 1994’s “Pontiac Moon,” starring Ted Danson and Mary Steenburgen.

To address your request for Amphicar information, it was built in Berlin, German, from 1961 to 1968 and powered by a 4-cylinder, 43-horsepower Triumph engine. Total production came in at 3,878 vehicles, of which 3,046 were imported into the United States through 1967. To this day, Amphicar is still the one and only amphibious passenger automobile ever mass-produced and had a top speed of 70-mph on the highway and 7-mph on water. It sold from $2,800 to $3,300 through ‘67, but because of new 1968 U.S. DOT and EPA mandates no Amphicars were imported in 1968 as they failed to meet the new regulations. Because 90-percent of Amphicars were sold in the U.S.A., the Berlin factory closed immediately and that was the end of Amphicar.

The Terrafugia concept of a flying car called the TF-X can take off like a helicopter, fly like a plane, and can be driven on the highway like a car. To date, its homepage does not list any future mass production planning and in April of 2019, one of its founders, Carl Dietrich, left the company. (Compliments Terrafugia)

The International Amphicar Club has a nice club member web page at amphicar.com where you can find more on this unique land / sea vehicle.

In ending, be it land, sea or air, hopefully we’ve got you covered with this feature, James. Thanks for your letter and kind words.

(Greg Zyla is a syndicated auto columnist who welcomes reader questions on collector cars, auto nostalgia or motorsports at greg@gregzyla.com or at 303 Roosevelt St., Sayre, Pa. 18840.)

Be the first to comment on "Collector Car Corner – Flying cars still the car of the future; Amphicar was home on land or sea "