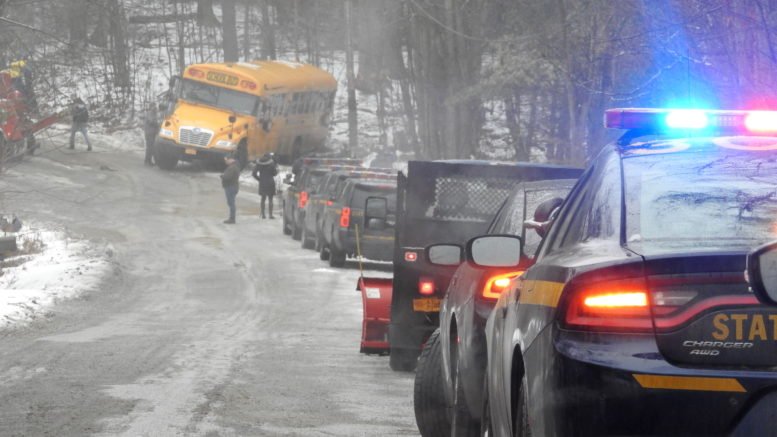 Law enforcement and emergency service personnel lined Brink Road in Candor following an accident that troopers are blaming on icy roads. The accident involved a Candor School bus and was carrying two children. There was one reported injury that was treated at the scene, according to police. (Photo by Wendy Post)

On Thursday, Feb. 6, icy roads forced a two-hour delay for most school districts in the region, to include Candor Central Schools. But with the two-hour delay in place, some roads remained icy to include Brink Road in Candor, where a bus driver hit ice this morning while negotiating a curve; and rolled over and into a ditch until the bus finally came to rest, according to State Troopers on the scene.

Zone Sergeant Jason Cawley, of the New York State Police Barracks in Ithaca, stated that at approximately 10:15 a.m., a bus carrying two students approached a curve on Brink Road in Candor, rolled over and slid sideways, finally coming to a rest off the road. The students on the bus, according to Cawley, are 10 and 11 years old, and were on their way to school in Candor.

As for injuries, Cawley noted that one of the children had a laceration on their finger, and was treated on the scene by emergency medical technicians and then sent home. The other student, as well as the bus driver, did not have any injuries. The second student also went home, according to Cawley.

By noon, crews had worked to safely pull the bus back onto Brink Road, and it was being towed to the bus garage in Candor for inspection. Cawley also noted that nobody was wearing a seat belt on the bus.

The crash remains under investigation.

Be the first to comment on "Bus rolls over on icy road in Candor; two students on bus"