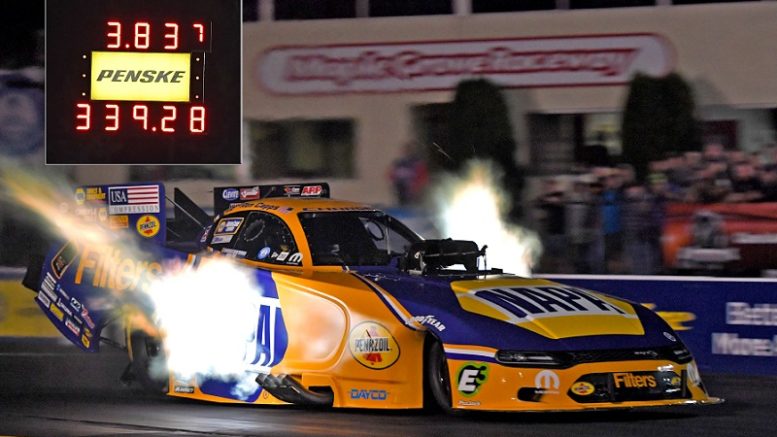 Q: Greg, how does the racing season look for 2020? It’s a new decade and I’m wondering what you feel will be the best racing series this year? Is NASCAR still going downhill with its TV ratings and attendance? Where do you see growth coming and do the sponsors still feel they are getting a return on investment? Thanks much, Warren K. from Rhode Island.

NASCAR: Although NASCAR’s TV ratings have suffered as you note, they actually did better the first half of 2019, then dropped off the second half to end up at 119.669-million TV viewers per race versus 125.572 million in 2018. I expect 2020 to improve, as a new crop of drivers move up from the Xfinity series to full-time NASCAR Cup Series ala Cole Custer, Tyler Reddick and Christopher Bell. The upcoming Speedweeks at Daytona, which culminates with the Daytona 500 on Sunday, Feb.16, will clearly be an exciting event with packed grandstands. Last year’s Daytona 500 attracted 9.1- million TV viewers, its biggest draw of the year.

However it’s what follows Daytona where we get a better glimpse of NASCAR on a weekly basis. Following Monster Energy’s final year of major Cup sponsorship in 2019, NASCAR will now share its major Cup entitlement between four companies (Xfinity, Coca-Cola, GEICO and Busch Beer) and call them “premier partners.”

The biggest deterrent to “fan growth,” in my opinion, is the fact that a large majority of NASCAR fans are baby boomers, many of them now in there 70s. This demographic reality not only affects NASCAR, it impacts other major sports, too.

NASCAR will continue to tweak its events in hopes of attracting a younger demographic, which these days is easier said than done. Specifically, the consumer recreational dollar is spread very thin as other forms of sport and entertainment impact where money goes. And, when you add in the non-controllable things like too many of the younger generation who sit at home playing video games or those addicted to their cell phones, the difficulties of attracting new fans becomes clear.

Still, empty seats or not, NASCAR’s 36-race live TV programming series remains strong and solidifies its many good reasons to advertise from the Fortune 500 companies that partake in both race team and/or event sponsorship. So in 2020, regardless of how many seats are occupied, NASCAR will continue to be the top attraction.

IndyCar: This is the sanctioning body that has the best opportunity for growth, especially under its new owner Roger Penske. IndyCar once ruled as the premier American racing attraction right on through the 1970s, when packed grandstands were the norm and drivers like AJ Foyt, Mario Andretti, Johnny Rutherford and the Unsers roamed our speedways.  Things unraveled quickly after a USAC sanctioning body disagreement with owners in the late 1970s. A new CART sanction was born, and then years later IndyCar split yet again to form IRL and CART teams, diluting and imploding the once great IndyCar fan base and the sponsors that were involved. Enter NASCAR stock car racing, which experienced tremendous growth through the 1980s while IndyCar suffered.

Now back under one sanctioning body with major sponsor NTT, (Nippon Telegraph and Telephone) IndyCar’s on-track racing is the best (close, fast, exciting) and its yearly 17-race schedule delivers a menu of street, road course and oval events to whet the appetite of the most serious of race fans. And, with hopes of more teams, better purses and a new engine manufacturer (currently only Honda and Chevy supply engines) I’m putting my money on IndyCar to show the biggest gains in both its TV ratings, which were up a solid nine-percent in 2019 at 1.105-million viewers per race, and new sponsors coming aboard thanks to Penske, who has an abundance of excellent business contacts. Watch NTT IndyCar closely the next five years as most needed is better TV ratings, additional race teams and higher race purses.

IMSA: If there’s one “sleeper” sanctioning body in this group of four, it’s got to be the Weather Tech sponsored IMSA group. If you like sports cars and great racing, IMSA will punch your ticket and, unlike NASCAR, where only three manufacturers play (Ford, Toyota, Chevrolet), IMSA’s 13-race schedule feature cars from so many manufacturers it’s hard to keep up.

Currently, everyone from Cadillac to Acura to Mazda are major factory team players, while supporting events include Ferrari, Porsche and Lamborghini only events along with the popular Michelin Pilot Challenge that feature smaller bore engine TCR events and the faster, larger bore Grand Sports in up to four- hour endurance events. Granted, more TV eyes are needed, which IMSA will receive thanks to NBC coverage and its enhanced Gold Track Pass streaming.

Bottom line? IMSA could become a big success as rules conformity with European racecars is on the horizon and younger age fan interest is growing.  Concerns include the high cost of participation that negatively impacts the number of competitors and teams with hopes of a factory Ford return in 2021.

NHRA: Perhaps the only sanctioning body that enjoyed increased attendance for 2019 based on announced sellouts (NHRA does not release attendance figures) and photos. Thus, NHRA is poised for another good year of straight line, fastest motorsports in the world, action.

However, there are concerns when it comes to the popular professional categories of Top Fuel, Funny Car and Pro Stock. The TV ratings are secondary, yet decent as most all programming is same day delay broadcasts that attract 500,000 viewers or so. Remember, nitro drag racing MUST be seen in person, no excuses. TV just doesn’t deliver, until you see it first in person.

Top Fuel and Funny Car are the fastest racecars in the world with acceleration from zero to 330 MPH in three seconds on a 1,000 ft. straight-line track. These cars run on nitro methane, and produce about 10,000 horsepower. Words cannot describe the power of these cars under full throttle, resulting in a “go through your body” loud experience. There is nothing like it in motorsports, and a visit to an NHRA race is a must if you’ve never attended.

As for Pro Stock, it’s clear that the many NHRA rule changes and cost of competing have negatively impacted what was once a class as popular as the nitro division.  NHRA has now cut its Pro Stock tour from 24 to 18 races, while a popular Pro Mod class sits ready to take Pro Stock’s place if the class dissipates any further.

Overall, NHRA is running along better than most, with Mello Yello its major pro series sponsor while Lucas Oil handles the sportsman side of the sponsor equation. Another drag racing positive is the strength of local drag strip bracket racing where racers compete for cash prizes at local drag strips everywhere.

There you have it Warren, racing 2020 in a nutshell.

(Greg Zyla is a syndicated auto/motorsports writer. He welcomes reader questions on collector cars, auto nostalgia and racing at greg@gregzyla.com or write him at 303 Roosevelt St., Sayre, Pa. 18840.)

Be the first to comment on "Auto Racing 2020: Major sanctioning bodies ready for New Year"