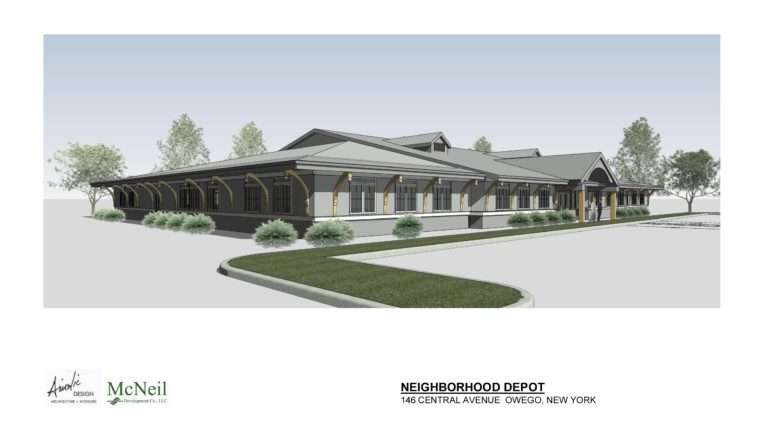 Pictured, is a rendering of the Neighborhood Depot Project, or non-profit hub on Central Avenue. Photo provided by LeAnn Tinney.

Village and county officials are hopeful that construction on approved Downtown Revitalization Initiative (DRI) projects will begin in late spring or summer, which total roughly $20,000,000 with half coming from the state. Owego was one of multiple Southern Tier and Finger Lakes municipalities to be awarded DRI funding by the state, and has $9.7 million approved for private and municipal projects.

“Right now the process is going well, it’s slow but going fast for what it is. Large state grants tend to move at grant speed,” said Mike Baratta, mayor of Owego.

Projects include Coburn Library improvements, the Central Fire Station Restoration, the Tioga historical Museum expansion, lighting and infrastructure improvements, and more. While $9.7 million of the DRI projects comes from three state agencies, the New York Department of State, Housing Community Renewal and Empire State Development, which are all overseeing different portions of the funds.

While all grants are directly with the village, Baratta said that municipal projects administered by the DOS are the only projects the village runs point on. Other grants and projects are, in part, overseen by LeeAnn Tinney, director of Economic Development and Planning for Tioga County, on behalf of the village.

“We are pleased with the process, we do a lot of work with state agencies, and we are quite familiar with the time that takes to put a project together, so it’s not surprising to us where we are,” Tinney said.

Despite being pleased with the process, Tinney reiterated multiple times that Tioga County is only helping on behalf of the village.

“The County has been great with helping us because we don’t have as much staff,” Baratta said.

With slow but steady progress, Tinney said it is possible private projects funded partially under the DRI could begin in late spring. Part of the reason for how long the process takes is that approved private projects under the DRI are only entitled to recoup half of the total cost of the project from the state. On top of that the permitting processes, grant writing and other issues can be time consuming and complicated.

“Some of (the money for the private projects) has been raised, some of it is still is in the process of being raised,” Tinney said.

Tinney added that she does not expect every project approved by the state to proceed as planned, as changes in funding and circumstance are always inevitable for projects of this scope. Despite that she said she is confident that Owego will not lose out on any state money.

“I do think the full $9.7 million will be spent. Will it be spent as it was originally laid out? Probably not, there will probably be some changes and modifications but we won’t leave any of that money on the table and will figure out some other way to use it. We anticipate that and we are aware that is probably going to happen, but we will figure it out and redirect as we need to,” Tinney said.

According to Baratta, who said that the eventual impact of the DRI projects on Owego would be huge, municipal projects administered through the DOS are still in the process of being worked on and they will take longer before ground is broken.

“The municipal projects are more preliminary, so probably this winter we will start hiring design firms to start really digging into the details of all those projects,” Baratta said. Even with the inherent stagnation of the process and the inherent change in the projects that will most likely occur, Baratta said he is optimistic.

“Everything is moving along great, now there is a lot of paperwork and a lot of stuff going on behind the scenes that people can’t see, but we are hoping for change people can see this summer. That’s our goal,” Baratta added.

To view a full list of projects, visit www.villageofowego.com/sites/owegony/files/news/owego_award_booklet_0.pdf.