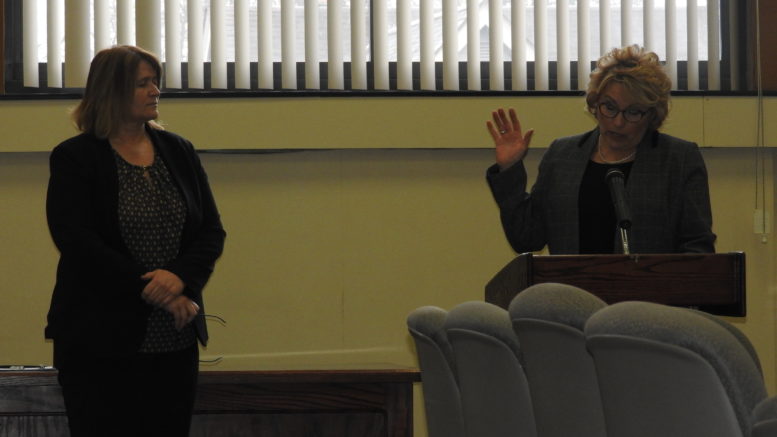 Legislator Marte Sauerbrey is sworn in for another one-year term as Chair of the Tioga County Legislature during the county’s first special and organizational meeting held at the County Office Building in Owego on Thursday. (Photo by Wendy Post)

“Let’s make this year a year of progress for our county,” said Legislator Marte Sauerbrey after she was sworn in for another one-year term as Chair of the Legislature, and adding, “A year where we can take ownership of our future.”

Sauerbrey was one of seven officials sworn in on Thursday, and during the first special and organizational meeting of the Tioga County Legislature for 2020. The meeting was held at the County Office Building’s Legislative Auditorium in Owego.

First up to be sworn in was Sheriff Gary Howard, who will be serving his last term in office. With his wife Debbie, and a handful of his deputies attending, Howard thanked them all for their support, and said that he loves the sheriff’s office. Upon his retirement following this four-year term, Howard can walk away with accolades of being the longest running Sheriff in the county’s history.

Wayne Moulton was sworn in after Howard to serve a term as Undersheriff for Tioga County. Moulton thanked the legislature for the continued opportunity to serve.

Robert Williams and Ryan Kline were sworn in as well to serve another term as Coroner for Tioga County during Thursday’s ceremony.

For the Chair and Deputy Chair nominations, Sauerbrey was nominated, accepted, and sworn in again on Thursday. She spoke briefly about New York State mandates, following the swearing in, and stated that they do nothing but get in the way of the real work that needs to be done. She remained optimistic, however, and noted that 2020 will be a year of progress. Sauerbrey was also nominated and appointed to serve as the Public Information Officer for the year.

Swearing in as Deputy Chair, which is a one-year term, was Legislator Ed Hollenbeck; Dale Weston was nominated and voted in as the second Deputy Chair.

Legislator Michael Roberts was nominated and voted in as the Republican Majority Leader for 2020.

Other resolutions were also passed, to include setting the Chair of the Legislature’s salary at $36,675 per year, which includes $11,341 for serving as a Legislator, and an additional $25,334 to serve as chair. Travel for officials was also authorized as a county charge when deemed necessary for official duties.

Meetings of the Tioga County Legislature are open, and are typically held each month on the first Tuesday following the committee meetings that happen during the first week of the month. During March, June, September and December, meetings will be held at 6 p.m. All meetings are held in the Tioga County Office Building, located at 56 Main St. in Owego, unless otherwise specified.