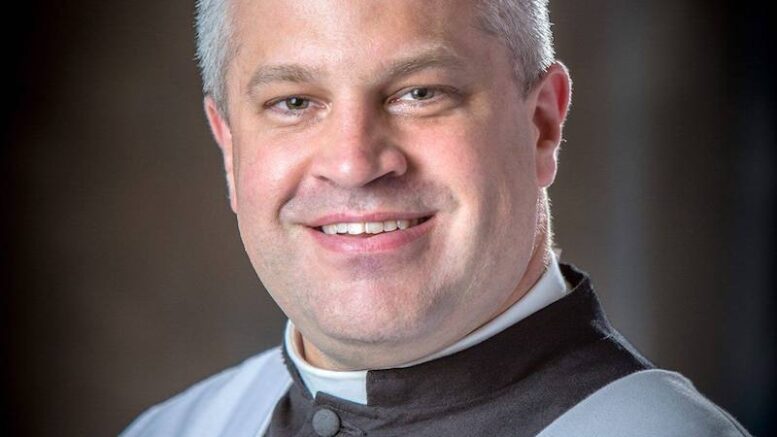 Pictured is the Rev. Steven B. Lewis, Parochial Vicar, The Catholic Parishes of St. Patrick and Blessed Trinity. Provided photo.

Posted By: By Rev. Steven B. Lewis, Parochial Vicar, The Catholic Parishes of St. Patrick and Blessed Trinity January 22, 2023

“What does God need with a starship?”

This line comes from Star Trek V: The Final Frontier (1989), the favorite movie of no fan of the original Star Trek cast that I know. The line reflected a moment of revelation for Captain Kirk. The starship Enterprise had journeyed to the center of the galaxy in a search for God. It was all going so well, until this divine figure asked the Enterprise to come closer to the planet.

“Excuse me,” Captain Kirk interrupted, incredulous. “What does God need with a starship?”

Needless to say, it went downhill from there. They had not found Whom they sought.

In the book of Exodus, chapter 3, God instructs Moses to go back to Egypt to free his people from their slavery. Moses is to tell Pharaoh, “Permit us, then, to go a three-days’ journey in the desert, that we may offer sacrifice to the LORD, our God.”

Pharaoh sees this as a ruse, but it is not a ruse. It is the reason: the people are to be freed so that they can worship. Regardless, Pharaoh needs some convincing.

We know the story. The last of the ten plagues, the killing of “every first born of the land, both man and beast,” achieves their freedom. This plague does not afflict the chosen people. The angel passes over them.

It makes sense that they would be spared this plague. The means, however, makes less sense. Why the details: the blood on the lintel and doorposts, the proscriptions of a ceremonial meal?

They might have asked the same question that Captain Kirk asked: “What does God need with a starship?” In this case, why does God, or his angel, need a sign to distinguish the Israelite home from the Egyptian one? God knows all. God could have spared His chosen people without the mark at the door. Nor does God need this sacrifice to protect His people. So it is clear that God did not institute this sacrifice for His benefit. And yet, He instructs the Israelites in Egypt to make a sacrifice. Why?

The other details instruct us. “This month shall stand at the head of your calendar; you shall reckon it the first month of the year” (Ex 12:2). This Passover establishes something new. Yes, Abraham was chosen, called and inherited a land, but his grandson Jacob and his sons left their heritage and entered Egypt in a time of famine. The Exodus marks the foundational moment for the nation. When they left for Egypt, they were but a family. After the Exodus, they are a people. God’s promise to Abraham is brought to fulfillment. So identity is part, here, of God’s plan for calling for this sacrifice.

“This is how you are to eat it: with your loins girt, sandals on your feet and your staff in hand, you shall eat like those who are in flight” (Ex 12:11). This remembering here is important. The ceremonial act makes present the reality that it recreates, or better, re-presents.

The attention to attire calls to mind the flight from Egypt that was about to begin. The unleavened bread anticipates the haste with which they would depart. To partake of the ritual in the home in this way, to mark the lintel and doorposts again, was to relive that release from slavery, to renew the national identity as the chosen people. It was to reflect on the past, and to thank the One who made it possible.

Back to our question, why did God institute the Passover sacrifice? Perhaps it was St. Augustine that gave us the briefest answer: “The God who made us without us was not willing to save us without us.” In other words, we are co-operators in our own salvation. As then, so now. They were invested in the outcome.

The fancy Greek word for this concept is anamnesis. Literally, it means, “remembering,” but such acts go beyond the simple translation. Christ invoked this concept at the Last Supper, when he instructed the Apostles: “Do this in memory of me.”

Be the first to comment on "A Pastor’s Thoughts"