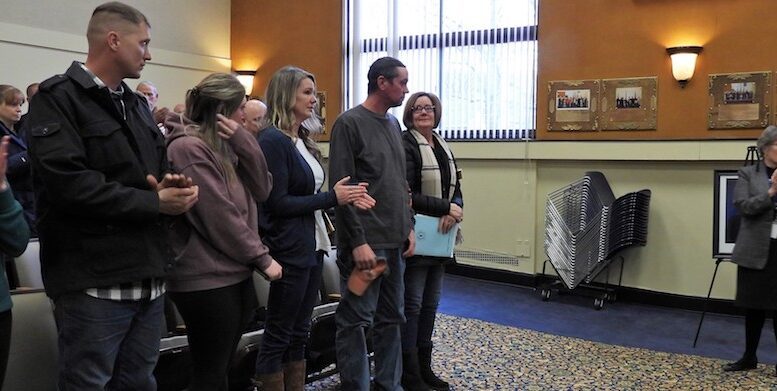 The Tioga County Legislature posthumously recognized Eddie J. Hollenbeck, former Legislator of District 7, at their regular session on Jan. 10.  Hollenbeck passed away on Nov. 23, 2022. Attendees offered a standing ovation in honor of Hollenbeck. Legislative Chair, Marte Sauerbrey, presented the Recognition Resolution to the Hollenbeck family, and extended to them Mr. Hollenbeck’s Legislative nameplates in honor of his seat and his 12-year tenure on the Legislature. (JoAnn R. Walter Photo)

In honor and memory of Hollenbeck, the Legislature recognized and expressed sincere gratitude for his dedicated 12-years of service as a Legislator.

Sauerbrey read several notable accomplishments by Hollenbeck from the Proclamation, including, in part, “Hollenbeck was appointed Deputy Chair of the Legislature in April 2017 and was appointed every year thereafter. Over the course of his career, Hollenbeck served as Chairman of several Legislative Standing Committees overseeing numerous departments, with his longest term as Chair of the Personnel Committee. He also served as the Chair of the Information Technology Committee and Chair of the Finance, Legal and Safety Committee.”

The Recognition Resolution also stated that Legislator Hollenbeck was always willing to step in and serve where needed, including as a Legislative Representative on the County’s Contract Negotiations Team, and served on the Southern Tier Regional Development Planning Board (Southern Tier 8), and on the Agricultural and Farmland Protection Board, to name a few.

The Recognition Resolution also noted that Hollenbeck was extremely dedicated and loyal in the performance of his responsibilities, and well respected by his peers.

Legislator Bill Standinger remarked, “Eddie was my fellow Legislator in District 7. One thing I enjoyed about him, he was very steady. My nickname for him was ‘Steady Eddie.’ He was very even-keeled, and I appreciated that,” and added, “His leadership was phenomenal. He took care of the North End of the County, while I took care of the Candor area. We worked well together, and I really appreciate the time I got to work with him.”

Hollenbeck passed away at the age of 70, and Jan. 10 would have been his birthday. Known to many as Ed, Hollenbeck was the third-generation owner of Hollenbeck’s Grocery Store located on North Main Street (Route 38) in Newark Valley, N.Y. He is remembered for his compassion to others, his kindness, and his heart of gold in everything he did.

The Tioga County Legislator is seeking candidates for the District 7 vacancy, which covers the constituency of Berkshire, Newark Valley and Richford. Interested candidates are requested to submit their resumes to the Clerk of the Legislature, Cathy Haskell, at the Tioga County Legislative Office, Ronald E. Dougherty County Office Building, 56 Main St., Owego, N.Y. 13827, or electronically at haskellc@tiogacountyny.gov no later than Jan. 18.

Be the first to comment on "Legislator Eddie J. Hollenbeck recognized posthumously"