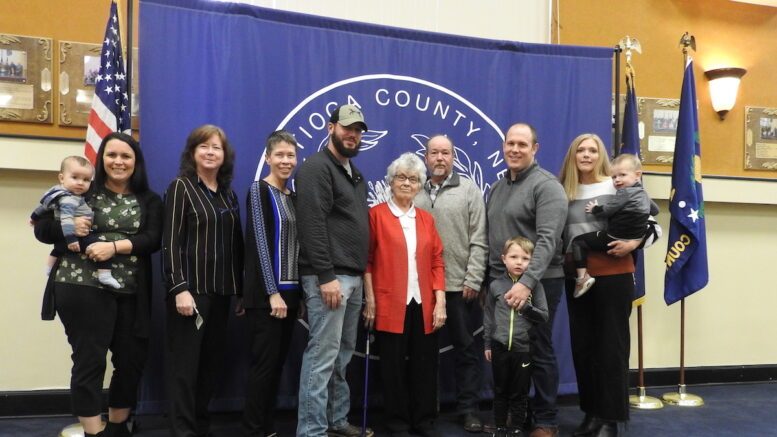 The family of Frank John “Bud” Waite is pictured in the County’s Legislative Auditorium on Tuesday, and prior to a resolution that recognized Waite posthumously for his service to the county’s legislature. (Photo by Wendy Post)

For the recognition on Tuesday, Waite’s family members were in attendance and a Recognition Resolution was presented to his widow, Lois Waite. 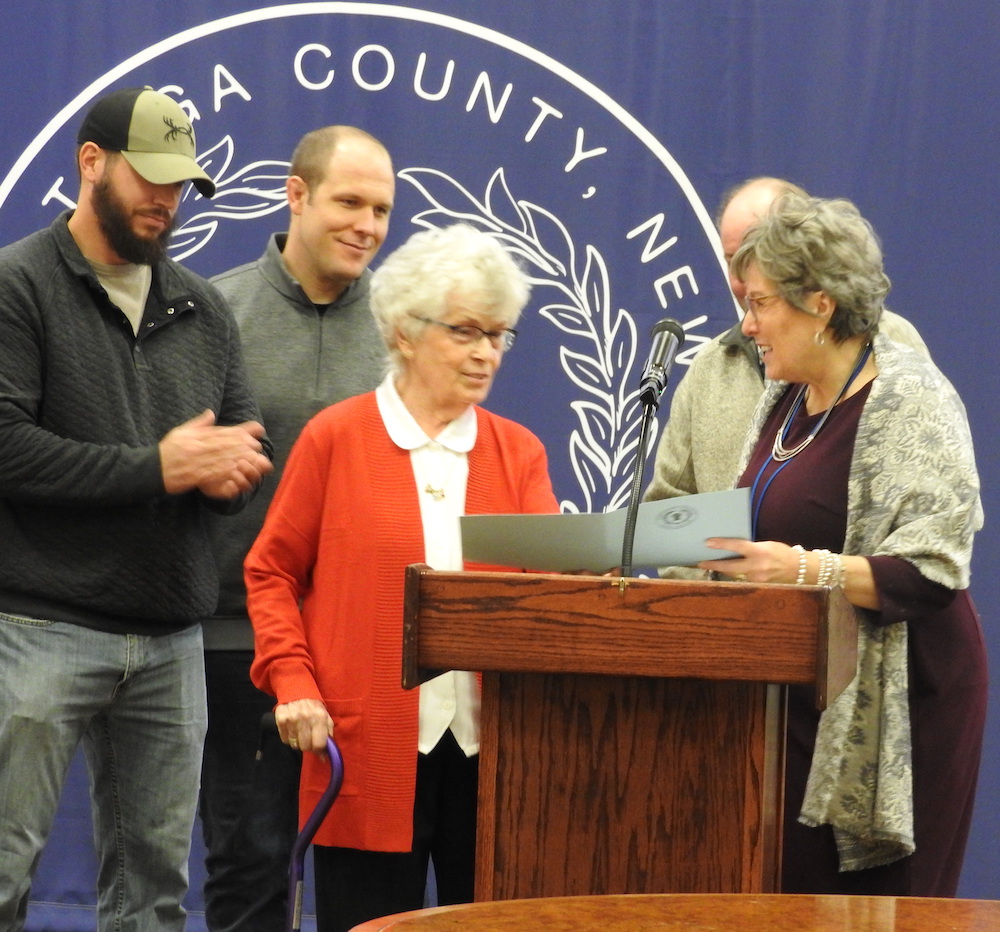 On Tuesday, Tioga County’s Legislative Chair, Martha Sauerbrey, presented a resolution to Lois Waite, the widow to Frank John “Bud” Waite, in recognition for his service to the county legislator. The recognition was presented posthumously. (Photo by Wendy Post)

Waite’s son, Christopher Waite, who was present on Tuesday, stated of his father’s service to Tioga County, “He took the time spent on the legislature seriously; he felt he had something to contribute.”

Not only was Bud Waite an eighth generation dairy farmer on the Waite Farm on the South side of Owego, but he also served on the Agway Board and was an active member of the Farm Bureau and Eastern Milk Producers.

During his 16 years of service to the Tioga County Legislature, Waite served on several Standing Committees to include Chair of Public Works / Solid Waste, in which he was instrumental in developing the curbside recycling program in Tioga County. Waite also served many years as a Legislative Representative on the Tioga County Soil and Water Conservation District Board of Directors. 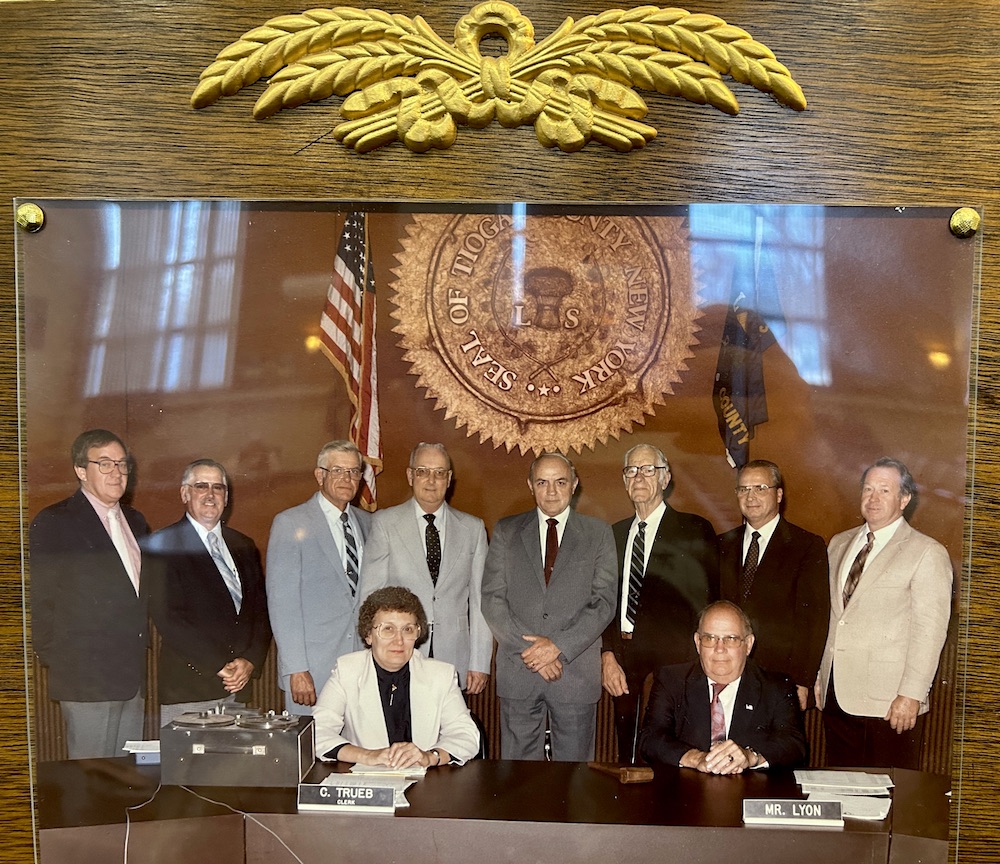 Also of note from Tuesday’s meeting was the recognition of November as Adoption Awareness Month, and proclamation recognizing Hunting Safety Month.

A hunting accident claimed the life of a county resident back in 2018, and the legislature wanted to emphasize the importance of safety when hunting. 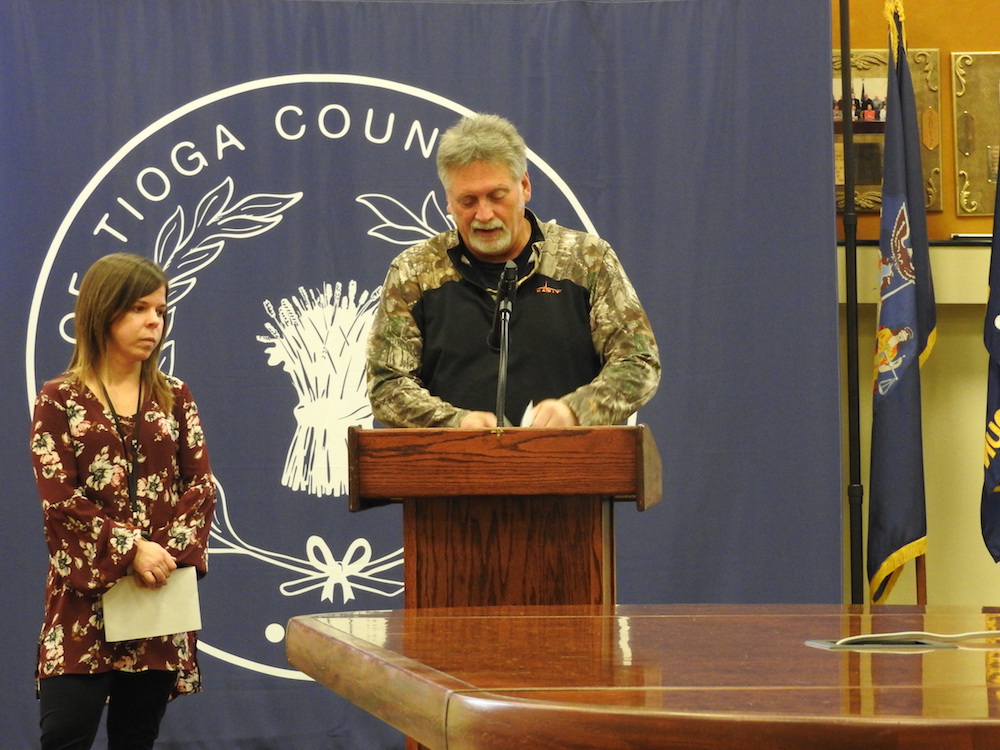 Vroman also spoke her own thoughts about hunting, stating, “It’s not just about the buck, it’s about watching the sunrise and sunset, and putting meat in your freezer.”

You can view the proclamation at https://tiogacountyny.com/media/ii1pkjqh/november-22-hunting-safety-month.pdf.

Also, and during privilege of the floor, Waverly’s Mayor, Patrick Ayres, talked about the vacant Waverly Village Hall wing, and continued to encourage county officials to consider occupying office space in Waverly.

“The county should expand its footprint in the western part of the county,” said Ayers, adding, “The wing is there.” 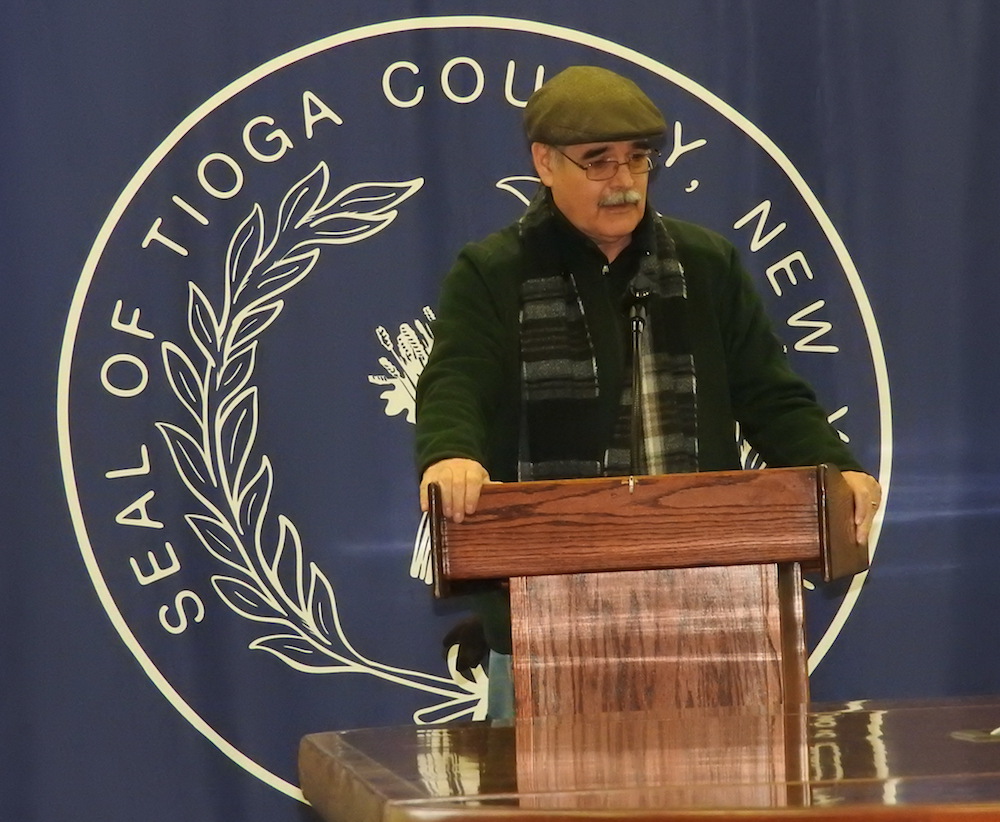 Waverly’s Mayor, Patrick Ayres, talks about Waverly Hall’s wing during the privilege of the floor at Tuesday’s regular meeting of the Tioga County Legislature. (Photo by Wendy Post)

The article also spoke about prior discussions with Tioga County on what to do with the unused village wing.

The article noted, “There was initially significant interest from both sides to set up the location for the county’s mental health services, but the estimated cost of the renovations to make the space suitable for operations made it apparent that other county departments would need to set up in the wing as well to make it feasible.”

Now the mayor is revisiting things again, this time during privilege of the county’s legislative floor. And although a Sept. 15, 2022 Morning Times article wrote that “anticipated costs for renovating the space came in higher than expected”, Ayres stated that the project is going to happen, and that it will not result in any increase in taxes.

“We’re already connected through shared services,” said Mayor Ayres, and as he addressed the legislature on Tuesday.

More county information and news can be found at www.tiogacountyny.com.