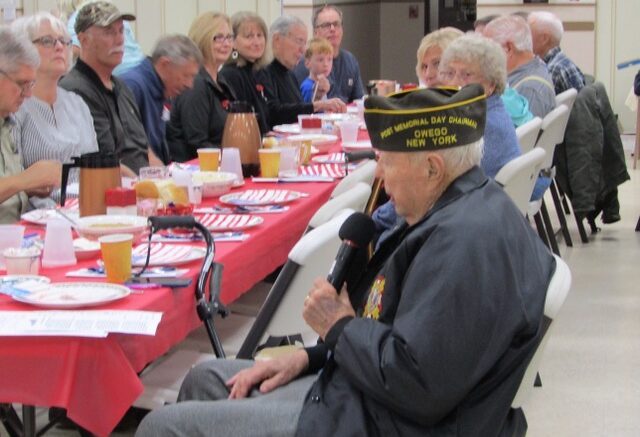 Jim Raftis addresses guests attending the Newark Valley Historical Society’s Veterans Day Dinner. Raftis was honored during the dinner for his support of the community’s veterans, and for his volunteerism. Provided photo.

The Veterans Dinner goes back 14 years, with the first two taking place at the Newark Valley Depot, now the Ray Shaver Depot. It was very crowded and quite chilly, which prompted the Society to make a change of venue. 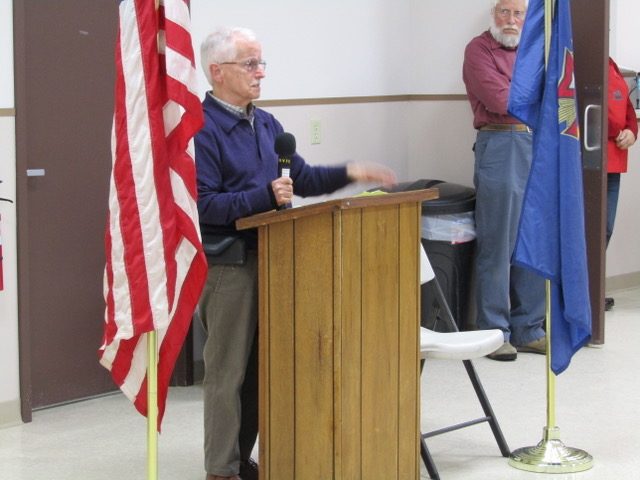 Opening remarks and a welcome were given by this writer, and on behalf of the Historical Society. Jim Tornatore, Mayor of the Village of Newark Valley, made opening remarks. He thanked the veterans for their service and the sacrifices that they have made on behalf of the country, and was very appreciative to see such a wonderful turnout. 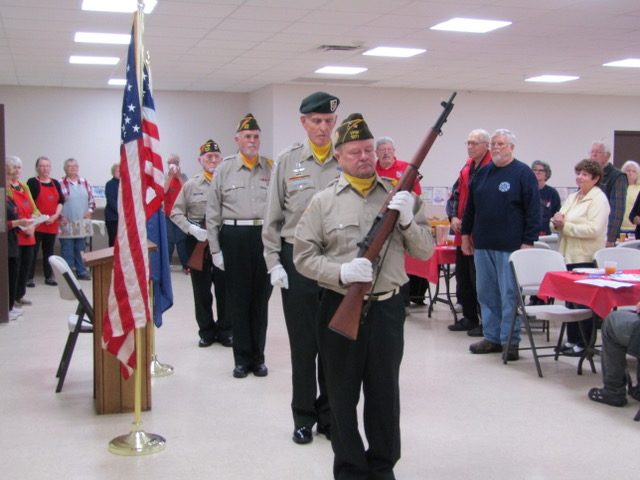 After the colors were presented by the Color Guard of the Glenn A. Warner VFW Post 1371, Father Lewis of Blessed Trinity Parish gave a blessing. Valley Harmony, a four member male quartet, two of whom sang the Star Spangled Banner, provided entertainment. Although not on the program, a woman by the name of Kathy Briggs spoke about her efforts to support the “Wreaths Across America” program. 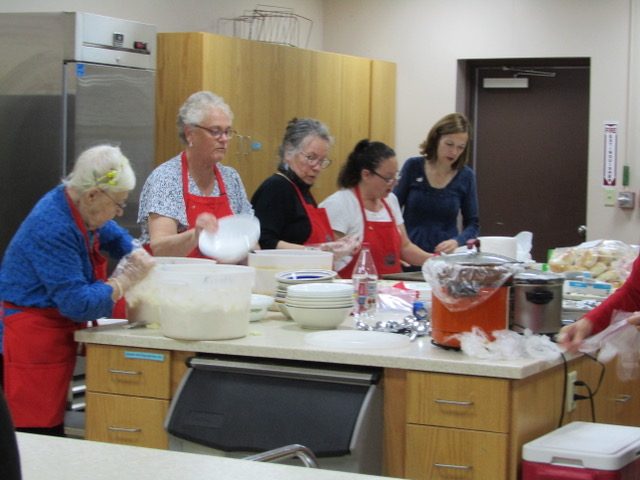 A meal was provided to the veterans with ample homemade desserts available as well. Marcia Kiechle and dinner crew were busy throughout the evening. It must be added that many of those helping that evening had been involved with providing food and deserts for the Depot Friday Night program this summer. 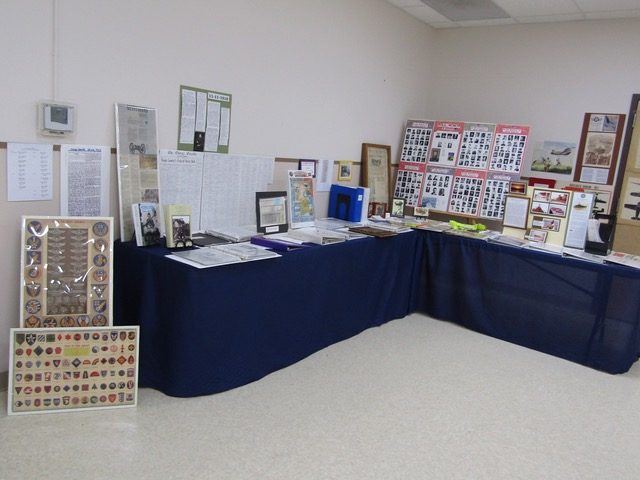 A display is set up at the Newark Valley Historical Society’s Veterans Day Dinner. Provided photo.

Marty Schneider, who volunteers for the town historian’s office, provided an extensive display. The items focused on material relating to veterans. Jerry Marsh, a Vietnam War veteran, now deceased, previously had done this. Jerry wrote a book on the Civil War veterans from Newark Valley entitled The Brotherhood of Battle. He was writing a second book that was of a more comprehensive nature for the entire county on the Civil War when he passed away. His classmate and good friend, Dr. Charles Yaple, finished this. This is now in print and available as So Noble A Cause. Marty would also like to get a complete listing of any Purple Heart recipients from Northern Tioga County. You can call her at (607) 642-8789.

This writer brought in books his father used during his time in the Navy from 1942 to 1947 to become a machinist mate 1st class. One was from the USS New Jersey and another was a missal that he used while he was in the service. There was also a rendering of the USS Chester, a heavy cruiser, done by Carrie Dru Tornatore. He was aboard the Chester during the Battle of Coral Sea. This writer also brought his wedding picture, which took place in January 1947 and while he was still in the service. 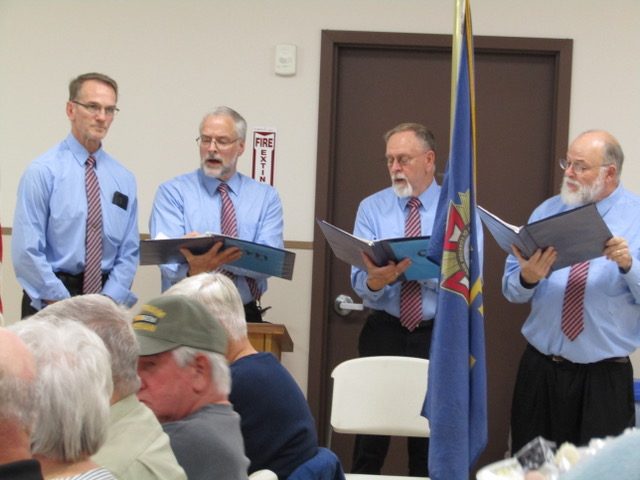 The Master of Ceremonies was Jim Raftis, Sr., who has worked for 68 years on behalf of veterans in Tioga County. After thanking all those who came, he made a roll call for the vets from WWII, Korea, Vietnam, Desert Storm, Iraq and Afghanistan. All theaters of war were represented, except for WWII. Jim’s own service was in Korea in the US Army from 1952 to 1954. He served as a company clerk for the 21st/171st Station Hospitals. Upon leaving the service Jim joined IBM Owego in December 1954 as a Human Resources Advisor, retiring in 1998 under the employ of Lockheed Martin.

Jim became especially drawn to veteran issues and concerns after visiting the Netherlands American Cemetery in Margraten, Luxembourg. This is where Owego World War II veteran Glenn A Warner is buried. You can see the listing for Glenn A. Warner in the cemetery online at www.interment.net/data/netherlands/netherlands-american-cemetery/records-w-z.htm. 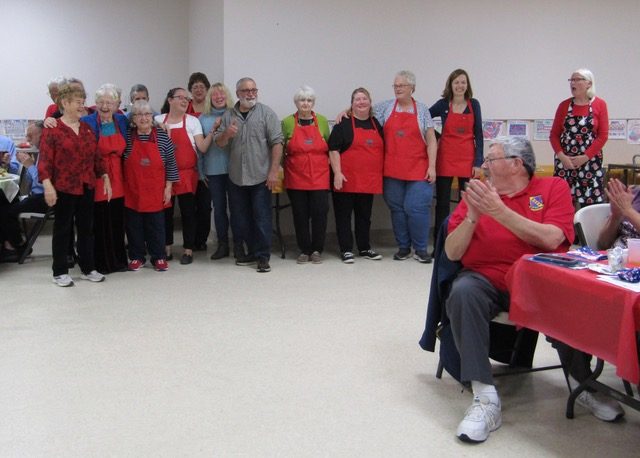 He is a life member of both the Glenn A. Warner Post 1371 VFW in Owego and the Tioga Post 401 of the American Legion.

Jim has served as the Master of Ceremonies for the VFW’s Memorial Day activities for 56 years, and emcee for various recognition dinners provided to vets by the VFW. He organized the Veterans in the Classroom Programs for the Owego-Apalachin School District as well as the Roll Call of Veterans buried in Tioga County cemeteries. Raftis was the local organizer for Wreaths Across America, a program to place wreaths at veteran gravesites. 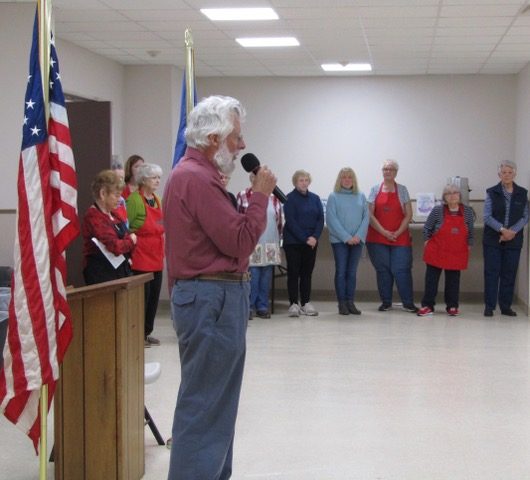 There is probably no one in Tioga County who comes close to Jim’s support and involvement with local sports. This began as a sports writer for the Owego Gazette shortly after leaving the service. He is a 60-year volunteer for Owego Little League. As the sports / special events director for WEBO (1959-1998) he would give play by play coverage for Little League Baseball games, OFA football games, and OFA basketball games.

Jim has received a number of awards for his involvement in the community including being designated a Paul Harris Fellow by Rotary International, the Elks Grand Lodge Distinguished Citizenship Award from the Owego Elks Lodge, Excelsior Awards from the NYS Senate and Assembly, and a placement on the Wall of Fame by the Owego-Apalachin School District. 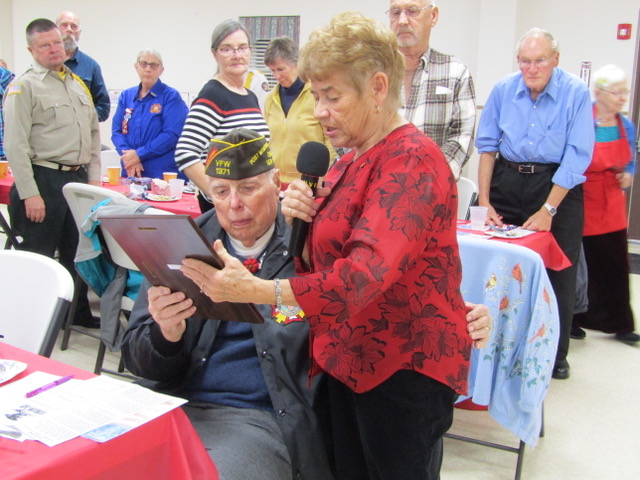 Marcia Kiechle presents a plaque to Jim Raftis in honor of his dedication to veterans and for his volunteerism. Provided photo.

The evening ended with a presentation of a plaque given by Marcia Kiechle on behalf of the Newark Valley Historical Society to Raftis, which read, “Given in recognition of your untiring efforts to document the sacrifices of our veterans and convey the importance of these sacrifices to the general public.” 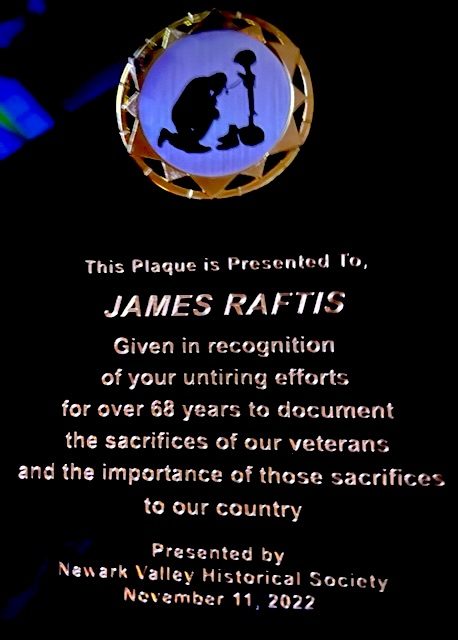 Pictured is the plaque presented to Jim Raftis by the Newark Valley Historical Society during their annual Veterans Day Dinner. Provided photo.

No doubt Jim was humbled by this latest testament to his concern for the recognition and welfare of Tioga County veterans. It is people like him working with various veteran groups and organizations like the Newark Valley Historical Society and all the other service organizations that help develop and strengthen community awareness, trust, identity and “sense of place”. Many of these organizations are struggling and are continually seeking new volunteers and financial support. Without such organizations and the people who devote time and talent on their behalf, we are simply a group of bodies and some statistics that are living at a place on the map.

Jim was married to Virginia Sozanski Raftis for 56 years. She passed away on Feb. 10, 2022 and Jim mentioned that this was the first dinner of this type where she would not be by his side. He has two children, Dr. Jim Raftis, Jr. and Theresa Marie Raftis, and six grandchildren.