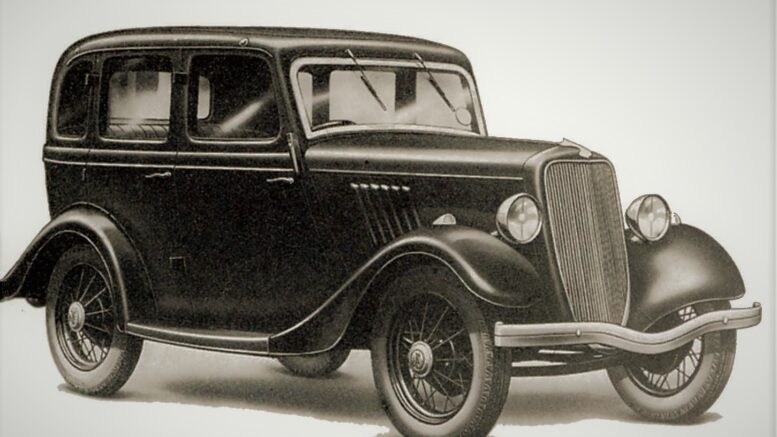 One of the first American mass-produced “suicide door” cars arrived in 1933 thanks to the Ford Motor Company. This Ford promotional artwork features a ’33 Ford Victoria 4-door sedan with a double set of "suicide doors." (Ford artwork)

Q:  Greg, I’m a lover of collector cars and especially those that were different from other cars of the era. Can you tell me when “suicide” doors appeared here in the states on a mass production? Sam D., Selinsgrove, Pa.

A: Sam – thanks for your handwritten letter and I’d be happy to opine. Those “suicide doors” arrived in mass production all the way back to the 1933 to 1939 Fords. These Fords had doors that opened from the front (left side) as opposed to the usual door that swung open like they do today. On the passenger side they opened from the right and swung left, while on the driver’s side they opened also from the left and swung to the right. (See 1933 Ford photo.)

Back in the 1930s these early suicide door Fords were known for its doors flying open when driving over bumpy roads, thus allowing the passenger or driver to be ejected. This is most likely how the “suicide door” moniker was born. Now in reality, I doubt many “suicides” ever took place in this manner, although I’m sure some people might have met their doom being flung from a moving vehicle. 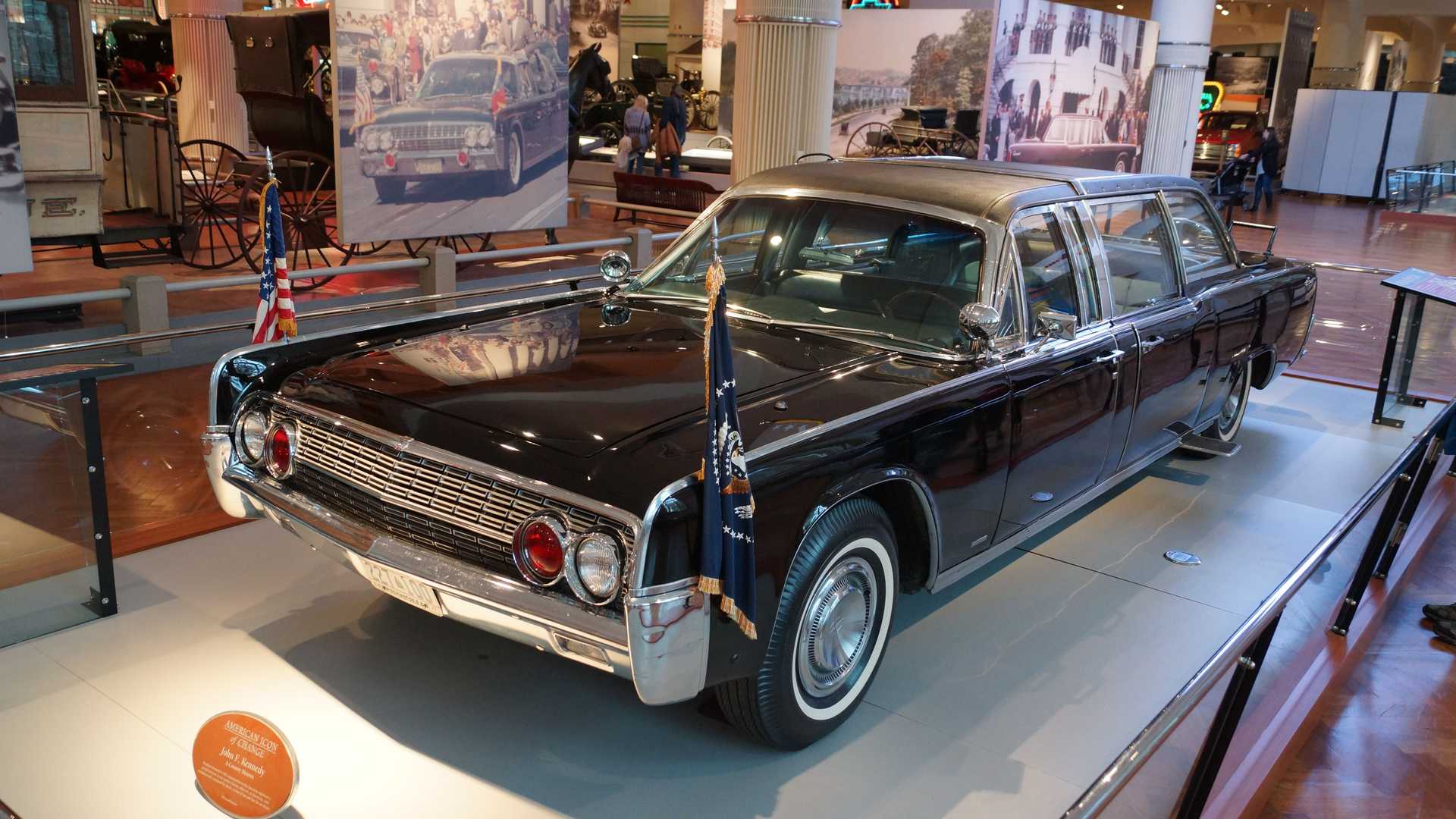 The 1961 Continental Limo / Convertible that President Kennedy was assassinated in had suicide doors and is on display at the Henry Ford Museum in Dearborn, Michigan. Most past Presidential Limos are destroyed intentionally after being retired, but the Ford Museum has several that have survived. (Henry Ford Museum)

However, I think the term “suicide door” is more so just a marketing gimmick and the most famous of all suicide door cars, unfortunately, was the ’61 Lincoln Continental Limo / Convertible that came with suicide doors and was the model we lost our President Kennedy in after the many shots fired at him.

By 1961 there was no way the doors could fly open on the highway as they were well built.  The suspensions were all modern, and those nasty road bumps allowed the 1930 style wooden frames to flex too much, allowing the doors to swing wide open. Thus when manufacturers went to the rear doors that opened “the wrong way,” they were still called “suicide doors” for the above reasons.

On coupes, like a 1931 Hupmobile, the front doors were suicide, which was a common build platform. Another car that comes to memory is the 1951 Studebaker Commander, which had the rear doors suicide style while the front doors were normal. This is starting to be a crazy column as I try to explain “suicide,” “rear suicide,” and even “normal” the best I can. The only used car my dad ever owned with rear suicide doors was a 1951 Mercury sedan, which he then traded for a really nice 1955 Plymouth Savoy 4-door that had the “normal” rear door opening. 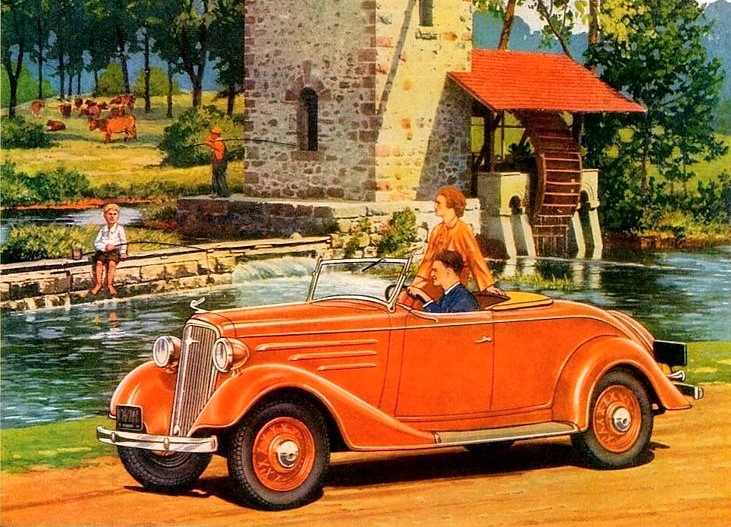 The 1935 Chevy Coupe offered a rumble seat option if built the first half of the year. If you bought a ’35 later in the year, it arrived with a 1936 body and no rumble seat option. The ads from the 1930s were more artistic works of art and are starting to be collectible nowadays. (Chevrolet artwork)

I want to thank reader Roger Jensem, from St. Charles, Ill., as I used some of the information in this week’s answer thanks to a letter he wrote several years ago. He noted in his letter other information I feel you’ll enjoy, especially about the 1936 Chevy Coupe.

These 1936 Chevy Coupes were called “little sister coupes” because the first half of the production year Chevrolet used the 1935 body with a short trunk that was built for a reversible rumble seat. Then when production tooled up for the 1936 model the assembly line utilized the new 1936 body, which featured a long trunk and no rumble seat availability. Also, the 1936 Chevys utilized hydraulic brakes (juice brakes that needed fluid) while the 1935s did not.

Finally, the 1931 Studebaker Commander had wood spoke (artillery looking) wheels and mechanical brakes that worked very well. Unique about the wheels is that the Commander had a spare tire mounted on the back, while some of these Studebakers also came with front fender open area for those who wanted to carry two or even three spare tires. Specifically, if you ordered the Studebaker President top end model, both front fenders were capable of spare tire storage.

Want more? Another reader, signed simply Dave from Rhode Island, brought to my attention this goodie. 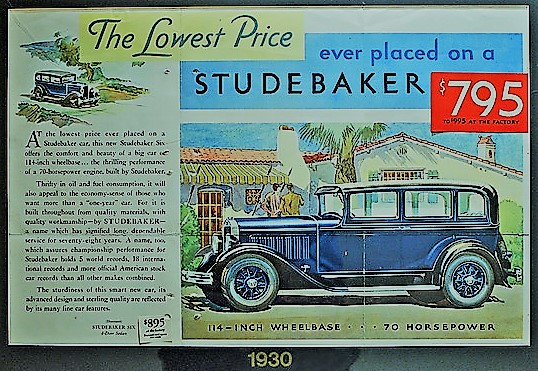 Studebakers built in 1930 and 1931 came with a spare set of axles standard from the factory, and an axle “driver tool” to remove the rear wooden wheel assembly from the tapered axle shafts for a quick fix. (Studebaker photo)

All 1930 and 1931 Studebakers came with a spare set of axles from the factory and an axle “driver tool” to remove the rear wheels from the tapered axle shafts. Just the usual “broken axle” part of the evolution of the motorcar I find very interesting.

Next week I promise we’ll get to a famous Hollywood character actor, as I’m awaiting some information he is sending me through the mail. I’ll just say this is one actor who really knows his stuff, and his muscle cars are noteworthy. His name is F. William Parker and if you check him out on IMDb you’ll be amazed how many TV shows and movies he’s been in.

Sorry for this week’s mishmash of information, but I’m trying to answer reader questions as best as I can.

(Greg Zyla is a syndicated weekly auto columnist who welcomes input on auto nostalgia, collector cars and all types of motorsports. Please write to greg@gregzyla.com, or handwritten to 303 Roosevelt St., Sayre, Pa. 18840.)

Be the first to comment on "Collector Car/Cars We Remember; 1930 memories: ‘suicide doors,’ ’36 Chevy ‘twins’ and Studebaker axle kits"