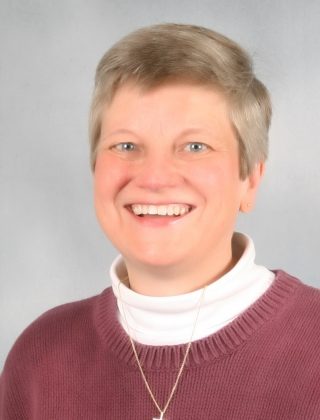 Hello! My name is Nancy Adams, and on July 1 I became the pastor of the Owego United Methodist Church. I am really enjoying my church family, living in the village, and look forward to meeting many of you!

I actually moved to Owego in late June, with a seemingly endless number of boxes to unpack. If you have ever moved, you can probably relate. Prior to moving, I sorted, tossed, and recycled seemingly tons of “stuff.” I donated several boxes of “stuff” to the Salvation Army prior to the move, and since the move I have donated at least three more boxes, wondering, “Why have I given these items space in my house?”

It felt SO GOOD to recycle old laptops, stereo equipment, LOTS of computer cords that had the big prongs on each end that don’t fit anything I have anymore, and several other items. That stuff can never clutter my life again!

Having said that, here it is September, and while there are LOTS of emptied and folded up boxes in the garage, there are still boxes in the house (mostly upstairs) that have not yet been emptied. I am not proud to admit that, but it’s true. Yes, I will get to them, knowing that every time I empty another box and find places for its contents, it is a victory!

I’ve been on many “treasure hunts,” searching for something I need. Early on, after the move, every day was a new adventure, discovering more finds. It cleared the way, making it easier to move around and enabling me to find what I need; and getting more settled so that I could function more effectively. Unfortunately I have a tendency to go from one room to another looking for something, and then get distracted from the original task, therefore not being as productive as I would have been if I had kept my focus.

Why did I share this with you? Getting rid of clutter around the house makes me think of how I need to get the clutter out of my spiritual life. How easy it is to get distracted, letting other things get in the way of the discipline – and yes, joy – of daily prayer and scripture reading, so we can be clear as to the ways our Lord is calling us to serve Him. Daily devotions are vital to keeping our focus, growing deeper in our everyday discipleship to Jesus Christ.

In Chapter 3 of his letter to the Philippians, the apostle Paul tells us that he could brag about his impeccable pedigree, but Paul goes on to say that it means nothing compared to knowing Christ.

I could do that, too. I’m a 4th generation pastor and have all the ordination certificates on the wall in my home office, spanning 1900-1992! While I cherish that legacy, it really is nothing in comparison to knowing Christ.

In verses 12-14, Paul uses a sports metaphor about pressing on toward the goal. Professional athletes and Olympians have singular focus on reaching the goal or excelling in their sport.

Paul writes in verses 13-14 of Philippians 3 that he has not yet attained the goal, but then he writes at the end of verse 13, “…but this one thing I do: forgetting what lies behind and straining forward to what lies ahead, I press on toward the goal for the prize of the heavenly call of God in Christ Jesus.” This one thing I do. This one thing I do, Paul said in that verse. Paul had singularity of focus.

I hate to admit that all too often I get distracted from the main thing, which has far more lasting implications than just getting off course with my unpacking. (I am so grateful for the grace of God and that He doesn’t give up on us when we get off course.)

For me, it’s not always this one thing I do. My desire is to have that laser focus that Paul had: to know Christ and to make Him known. How about you?

Be the first to comment on "Faith Column; Need for Focus"