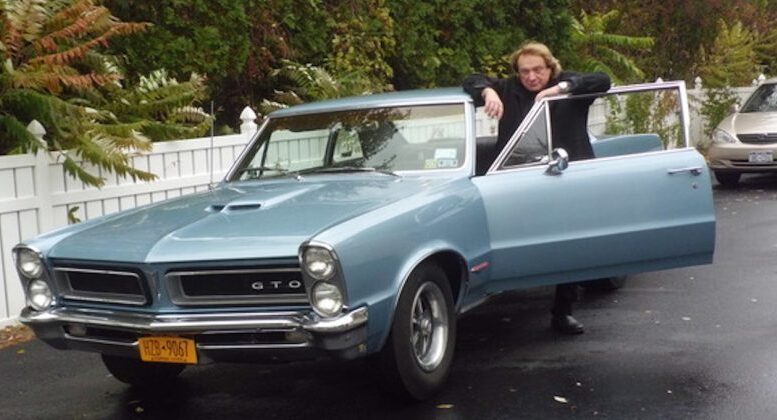 Lou Gramm is pictured with his ’65 Pontiac GTO, a car that inspired lyrics to his song, Rev on the Red Line, lyrics that resonate with muscle car owners. Photo provided by Lou Gramm.

It feels like the first time, like the lyrics from Foreigner’s first single released in 1977, except it’s not. For the second time, with the first being in 2005, Lou Gramm, one of the founding members of Foreigner, will take the stage for a headline performance on Saturday at Binghamton’s Spiedie Fest.

For Gramm, who has been busy working on material and performing at venues with his band, he’s looking forward to a return to Binghamton for a Saturday night performance at the Spiedie Fest. The show begins at 7 p.m.

“The show in Binghamton was great last time,” said Gramm in an interview earlier this week.

Promising to deliver, fans will hear many of their favorite Foreigner hits from the 70s and 80s and beyond, and what Gramm described as a good dose of rock-n-roll.

Forming the band in the 1970’s, Gramm is best known for his time as the frontman from Foreigner, and now with the Lou Gramm Band. Foreigner’s well-known hits like Urgent, Juke Box Hero, I Want to Know What Love Is, Midnight Blue, and others, frequently landed on the charts, and with the band’s 16 Billboard Top 40 hit songs defining an era.

For this writer, I grew up in the same area as Gramm, and had the opportunity to run across him a time or two; mostly when the band would practice in one of their homes. The band’s fame was upon them, but they were just your average guys, playing some really good music.

The band took off and began touring; and the lyrics in the songs connected with rock lovers not only in Rochester, N.Y., but also around the nation and the world.

Rev on the Red Line was inspired, in fact, during a cruise up Lake Avenue in Rochester, N.Y., which runs from the city to Lake Ontario, in his ’65 Pontiac GTO. 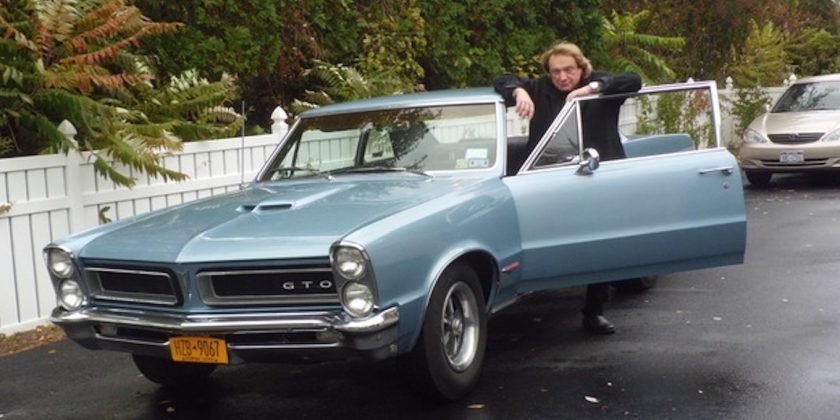 Lou Gramm is pictured with his ’65 Pontiac GTO, a car that inspired lyrics to his song, Rev on the Red Line, lyrics that resonate with muscle car owners. Photo provided by Lou Gramm.

Yes, “Runnin’ all night on Lake Avenue; It’s a piece of cake if you know what to do; You’ve got to lose a few ’til the stakes get high; When the odds are right, you just blow by,” were the lyrics that arrived while sitting behind the wheel of this high-performance car.

The song focuses on a boy unable to purchase a ticket to a sold-out rock concert. Listening from outside, he hears “one guitar” and has an epiphany, leading him to buy a guitar and learn to play it. He realizes that with the guitar he has a chance to achieve musical stardom. The song then goes on to describe the struggle he has to stay on top of the music charts, which makes him a “Juke Box Hero”. He eventually encounters another fan outside the stage door at one of his concerts who reminds him of himself, and of how it all began.

For Gramm, he stated that Jukebox Hero is telling people that anybody who tries hard enough, can make it.

“That boy was me,” said Gramm on Tuesday.

Gramm’s time with Foreigner spanned from its beginning in the 1970’s to his departure from the band for good in 2003. The reason for leaving, Gramm stated, was because of differences that couldn’t be resolved.

Gramm had split from the band prior to this, focusing on a solo career where he worked on several projects. The band reunited shortly after, touring and working on material.

Of Mick Jones, who connected early on with Gramm in a band known as Trigger, which was later renamed Foreigner; Gramm stated that they put out some good material together.

“We were a good writing team,” said Gramm of lyrics they wrote together for songs like Hot Blooded, and Cold as Ice.

And Gramm had some struggles of his own. During his time working on some collaboration and providing vocals on various projects, he was also diagnosed with a benign brain tumor.

The diagnosis arrived in April of 1997, and on the eve of a Japan tour. And although the doctors wanted him to wait a bit longer to return to performing, Gramm continued to work with Jones throughout his illness. By 1998, Gramm was back touring with Foreigner.

Around that same time, Gramm also became a Christian, and even released a Christian Rock Album in 2019, all the while remaining humble. After all, at the height of the 70s and 80s rock era, Foreigner had it all – the fame, the fortune, and the stories to tell through their music.

In fact, Gramm recalled a show in 1978, California Jam II, where over 400,000 people were in attendance. Today, his band is performing a lot of outdoor festivals, state fairs, and celebrations in general. In his hometown of Rochester, N.Y., the War Memorial used to pack in 10,000-11,000 for a performance by Lou Gramm and Foreigner.

Cascading to another level of music and songwriting, Gramm has plans to soon release a vinyl album, and is currently pulling song ideas from some of his hidden tracks. The album won’t be out in time for Spiedie Fest, but the band promises to have other merchandise available.

Of the album, however, Gramm says it will have the big album cover art, the old style records we grew up listening to. Those albums, curiously enough, are making quite a comeback, offering great timing for Gramm’s upcoming release; his collection, shall we say, from the vault.

Most of all, and with the twist and turns of a musical career and juggling the many changes in life along the way, Gramm remains humbled.

Of his fame, notoriety, and the immense adoration of his fans, Gramm states that he really has a normal life. What is really on his mind, most of the time, is the hopes that one of his cars won’t stall or overheat.

A car collector at heart, Gramm boasts a collection of muscle power with his ’68 Camaro SS, his ’67 Chevelle SS, his ’65 Olds 442, and his ’65 Pontiac GTO; all most likely running, at one time, up and down Lake Avenue.

As a Rochester girl, I get it. But I’m sure many can relate to the story of Gramm’s life, as written in his music.

Be sure to check him out on Saturday, Aug. 6, at 7 p.m. and during the Annual Spiedie Fest, taking place at Otsiningo Park in Binghamton, N.Y.

Scheduled music includes Brian Kelley of Florida Georgia Line on Friday at 7 p.m., Lou Gramm on Saturday at 7 p.m., and Gary Levox of Rascal Flatts on Sunday at 7 p.m. Tickets for each concert are available with a one-day festival pass for $20, or for all three concerts and three festival days for two people for $99.

You can find more information by visiting spiediefest.com.

Be the first to comment on "Feels Like the First Time; Lou Gramm arriving Saturday for return performance at Binghamton’s Spiedie Fest"