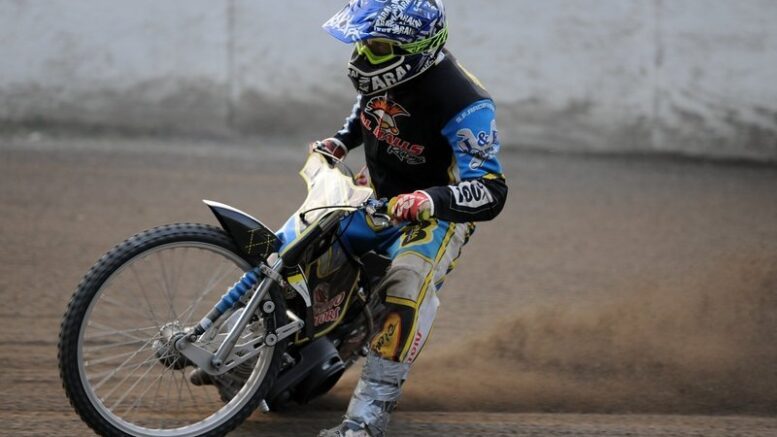 Champion Speedway’s July 16 program was the Olympique format and took place in front of the best crowd of the year so far, with a large competitor turnout where riders start the first round of heats on the same starting line and then the order in which they start for the last two rounds is determined by where they place in each heat. If a rider wins a heat he would then start on the 30-yard line the next time out, and if they were second place they would come off the 20-yard line; third place would be from the ten and last from the zero. The program makes for some good passing and is entertaining for the fans.

The first race was a great matchup of two of the best from the East Coast, former track champions Spencer Portararo and Casey Donholt. Donholt made a nice gate and would lead from start to finish, but not without heavy pressure from Portararo.

Those two riders would end up tied for overall points at the end of the heat racing, with 11 each. Current track champion Len McBride, and 5-time track champ Adam “The Missile” Mittl were next with 10 points, followed by Mike Cortese and Levi “The Hornet” Harris.

The top 8 would be placed in two semifinals with the top two placers in each going to the Main Event. Donholt won the first one, with McBride second. Cortese and Dave Oakden would transfer to the last chance event. Mittl led the second semi the whole distance but Portararo was in hot pursuit and eventually fell on the outside of lap three, ending his chase and causing him to have to go to the LCQ as well with Dalton Oakden. Harris would gain a second place when Portararo went down.

Mike Cortese took the start in the Last Chance and stuck to the inside like bubble gum. Despite multiple efforts from Portararo, he just could not get by on the inside and could not gain enough traction outside to unseat him. Cortese did a fine job to take the last transfer spot to the final.

In the original start of the feature, McBride was checked out and gone on his TANKS AUTO / Justice Bros / Scotts headers / Arai Helmets GM as they came down the back straight with Mittl in a solid second, but Donholt and Harris got tangled with Donholt’s leg getting stuck up under Harris’ fender. The ref ordered an original restart, and McBride again nailed the start and was leading but drifted wide off turn four and opened the door for Donholt to pass up the inside. He took full advantage and rode onto his first win of the season, making it five different winners in five weeks of Champion Speedway’s 2022 season!

The next race at Champion is July 30 at 7 p.m. and is the prestigious Omar Lightner Cup Championship, which honors the former track worker and Vestal Police Officer who was so very well liked and respected on the scene in the heyday.