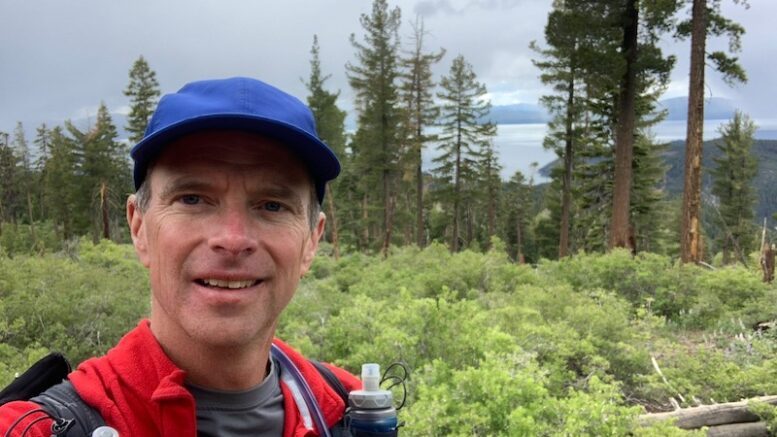 For 51-year-old Joe Higgins of Apalachin, the Father’s Day weekend of 2022 will remain a memory of a lifetime.

Higgins completed the Tahoe 200 Endurance Run, an ultra-runner event that attracts athletes from all over the world. He was one of only 250 selected via a lottery.

Described as an incredible journey around the largest alpine lake in North America by destinationtrailrun.com, the event featured some 40,000-plus feet of ascent / descent. Lake Tahoe, situated in both Nevada and California, is admired for its clear blue waters and panoramic views. 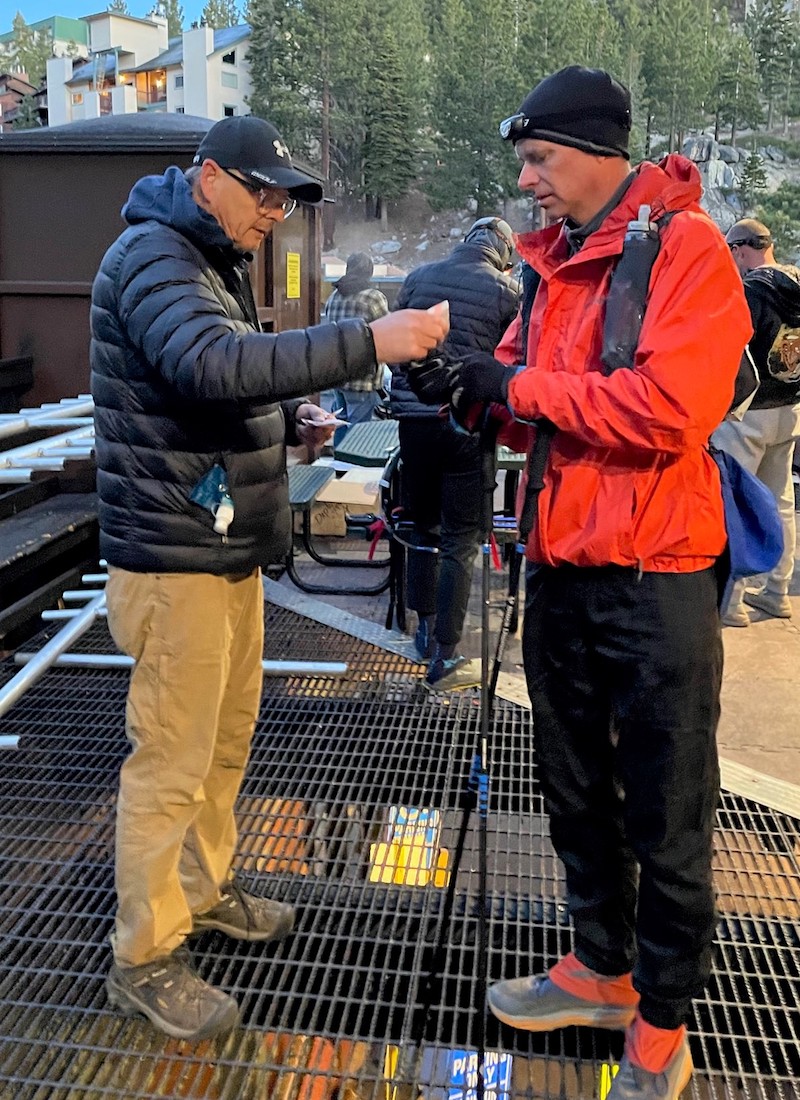 On the left, John Marshall, a crewmember for ultra-runner Joe Higgins, meets up with him at the 100-mile aid station, and during the Tahoe 200 held in June. Provided photo.

When Joe received word last fall that he had been one of the lottery picks for 2022, it meant even more since last year’s run was canceled due to extensive damage from the Caldor wildfire, and then COVID stopped the race in 2020. A fire closure route exception was made for this year’s event.

The top three finishers came in just under 60 hours, while the final finisher crossed the line at 99 hours. 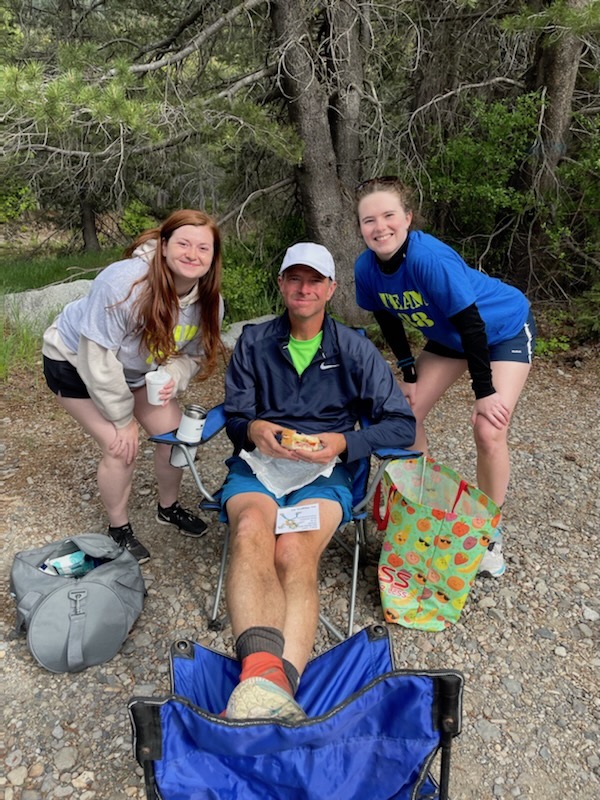 From left, Makayla Grantham, Joe Higgins, and Abi Higgins gather at the 190-mile aid station during the Tahoe 200 held in June. Joe Higgins, of Apalachin, participated in the ultra-runner event, and had a host of crewmembers to support his journey. Provided photo.

Joe remarked, “It was inspiring to see people not giving up,” and added that he was elated to be present to greet runners during the “Golden Hour,” or the last hour of the run.

Several runners, Higgins said, dropped out due to breathing difficulties from dry and dusty conditions. Along the route were multiple sleep and aid stations that offered medical care, meals, and runner-crew access.

No stranger to long runs, Higgins, a native of the Philadelphia area, completed a 50-mile run on his 50th birthday in May of 2021, a route that meandered through the City of Philadelphia. He had also completed a couple of other previous marathons.

It was the pandemic, Joe remarked, that inspired him to challenge himself more, and, “Gave me time to concentrate on running.”

Higgins worked from home for a majority of the pandemic period, and once his hours were fulfilled, out the door he ran. 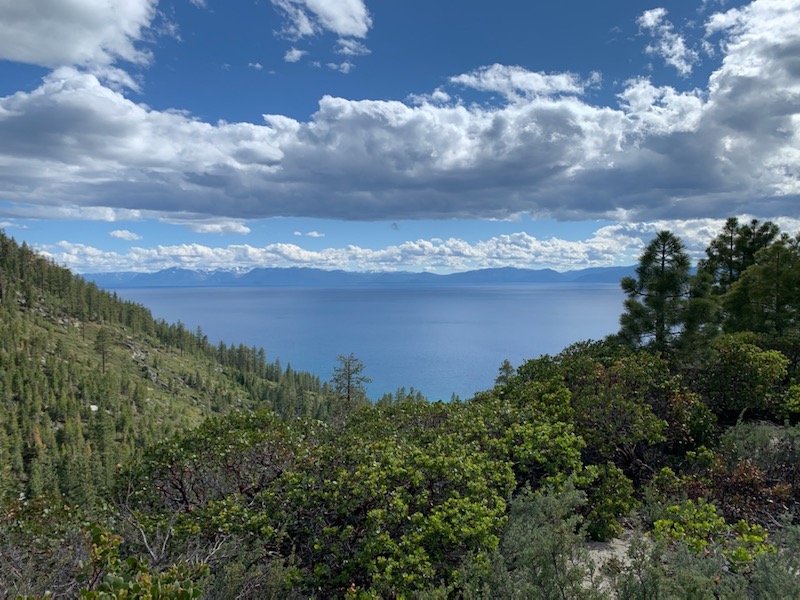 Pictured is a breathtaking scene along the Tahoe 200, an ultra-runner event held in June. Situated in both Nevada and California, Lake Tahoe is admired for its clear blue waters and panoramic views, as seen here by ultra-runner Joe Higgins of Apalachin. Provided photo.

The hills of Apalachin provided some elevation change beneficial to training, and hills he is accustomed to since relocating here in 2000.

The rocky-woodsy terrain at Buttermilk Falls and Robert Treman State Parks in Ithaca proved to be good training ground, too, along with miles on the Vestal Rail Trail.

Joe’s training spanned about eight months, and featured night runs and winter conditions. He logged about 70 miles a week, with two days set aside for longer 20-30 mile runs.

Preparing for the Tahoe 200 also meant packing smart. Items such as pants featuring an insulated layer, a jacket with hood, and an emergency shelter called a bivvy were mandatory.

Another of Higgins essential items were trekking poles, which he explained gave him stability and reduced strain as he climbed uphill.

The Tahoe 200 had been moved to the month of June from September to bypass wildfire threats, so Joe said he welcomed the cooler 60-degree temperatures, and didn’t mind a 20-degree snowy stretch.

Lake Tahoe is home to diverse wildlife, and Joe did observe a non-threatening bear about 25 yards away from the trail.

Joe’s crew team, his wife and children, along with friends and other family provided crucial aid during the run. They met up with him at specific checkpoints to provide food, drinks, and comfort items.

Susan and John Marshall, neighbors and friends of Joe’s, were part of the crew team, and exclaimed, “It was a great experience.”

Susan added that she and her daughter, Abby, prepared food for upwards of 17 people at any one time, and also helped pack up supplies for crewmembers such as John, who then delivered them to the aid stations. Joe was thankful for heated towels and fresh, warm clothes.

Higgins carried plenty of Snickers bars and quick energy snacks since he was burning hundreds of calories per hour. Aid station crews, Joe shared, were very attentive, and where one memorable stop served cheeseburgers and watermelon.

At the 100-mile mark, Joe explained that he experienced hallucinations.  Sleep-deprived and exhausted, he anticipated it might occur. He had only slept about seven hours total.

Joe’s hallucinations featured a panda bear, and then a circus-style weight lifter who was instead doing yoga along the trail.

He embraced the situation, though, and remarked, “It’s not uncommon, so I ignored it and moved on,” yet chuckled as he recalled what he saw.

And even after enduring fatigue, and pain too, Joe said, “There was no time when I felt like I wanted to quit.”

So what’s next for Joe? He mentioned the Moab 240, an ultra-trail run that spans the Moab desert in Utah, and a part of the Triple Crown of endurance runs, which includes the Tahoe 200.

Until then, Joe plans to focus his energy on running, and also soccer. A contributor to the OA Schools soccer program, he also coaches for Hiawatha Soccer.

2 Comments on "An incredible journey"