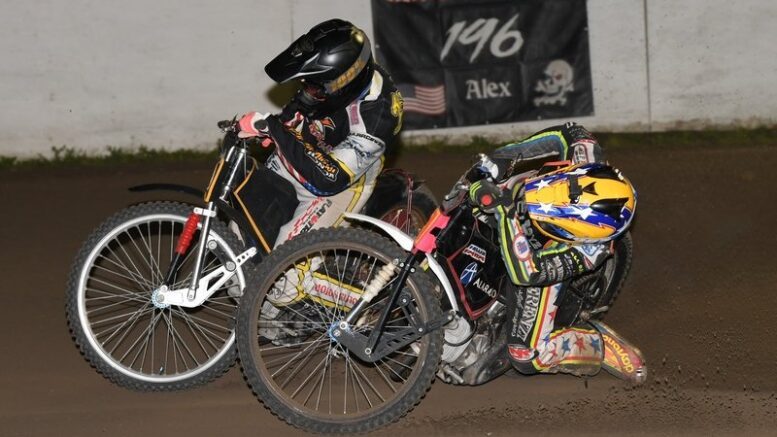 Champion Speedway played host to RD 2, the finals, of Meggan Hobart Spring Fling Championship last Sunday evening. The event paid tribute to the dear friend and staff member of 15 years who lost her battle with cancer several months ago. Round 1 was held the night before at Action Park East in Greene, where one of the all-time greats, Adam “The Missile” Mittl, won the Main event!

The weather was perfect at Champion Speedway on Sunday and the pits were full with 50 riders between Speedway and Trikes. A scratch and handicap format was run for speedway but the Championship was just based on the scratch portion results.

The scratch main ended with controversy. A great four lap battle was had between Mike Buman, who returning after a long layoff from a serious injur, and Spencer Portararo, the former track champion who was having equipment trouble and was on his second borrowed bike of the evening. 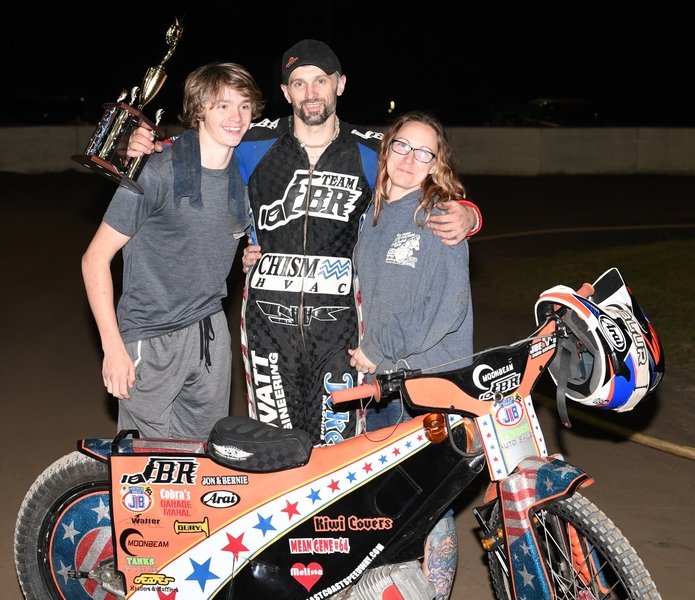 Buman was leading on the inside while Portararo was making ground on the outside. Heading into the last set of corners Portararo had made a big run around the cushion in turn four and was going past when Buman accidentally bobbled and got wobbly and came across the front of Portararo, causing him to run out of track and go down. Buman was credited with the win to the displeasure of the Portararo camp.

Mittl would come in second place, which, coupled with his win from Saturday, gave the 5-time Track Champion the Meggan Hobart Overall Championship. Dave Oakden, of Brockport, N.Y. was third in the main, with Portararo being given 4th and Lenny McBride 5th, as McBride had fallen on the second lap.

In the handicap feature, McBride would get revenge after his fall in the scratch final; the Windsor, N.Y. resident, and also 5-time track champion, was gaining ground from the 50-yard line and passing riders the first couple laps until Owego’s Alex “Hazard” Heath hit the deck, bringing out a stoppage.

Riders were restarted correctly in single file order of how they were running, with Heath placed at the back and the final several laps were run. Trenton Lane from Watkins Glen was riding an excellent race up front and McBride had to work at him patiently until he finally moved him over near the end to go on to his 2nd Handicap Main event win in a row this season and 3rd win total.

Levi “The Hornet” Harris, also from Windsor, would weave through traffic to win the 6 rider Division 2 class, while Polish International star, Marcin Nicpon, claimed victory in the Division 3 wars.

The JR Speedway class has been growing rapidly and the kids have done an excellent job with sponsorship from Powersports X Shop in Vestal and Robinson Racing. A superb race ensued for several laps in the final between Cody Pierce and Joel Farwell. They were neck and neck at the line in a decision that was tough to call. Farwell made a nice charge on the outside at the line and they appeared just about tied at the finish line with the scorers and referee stating Pierce held on by just inches.

The mini trike racing was top notch all weekend with lots of passing and excitement. Tyler Kehs would win Saturday at APE with Daniel Henninge next, but Henninge got the last laugh Sunday by returning the favor and winning with Kehs second.

The next event at Champion is Saturday June 11 and is the Jagger Roberts Memorial in honor of the young local ATV rider who lost his life several years ago racing hare scrambles. The new ATV track at Champion is expected to be complete for it, so fans can watch the Quad races prior to the Speedway show. The Quad program starts at 4 p.m., Speedway at 7 p.m.