Q: Greg, with the current troubles of chips not being available to the many car manufacturers, can you give us an update on the many electric car companies now involved in production? Also, can you give an update on how the car companies in America evolved? How many were there in the beginning? Thanks, we enjoy your nostalgia car columns very much. William L., retired and living near Spokane, Washington.

A: William thanks much for your kind words. As for the electric car companies now building cars here in the U.S., Tesla takes the top spot when discussions turn to successful electric car production. I’m not going to include companies like GM, Ford, Volkswagen, Kia, Nissan, etc. etc. that also build electric cars in the U.S., as I’ll concentrate more on electric only manufacturers.

Elon Musk’s Tesla is based in Palo Alto, CA and also has facilities in Texas and China. He receives my top producer “pat on the back” award, and rightfully so. Although not the founder when Tesla organized in 2003, had it not been for his massive investments in the company as an “angel investor” (before going public), the company would have gone out of business. His leadership resulted in his being named the CEO and product architect in 2008 and thus leading the charge when it comes to electric vehicle manufacturing. 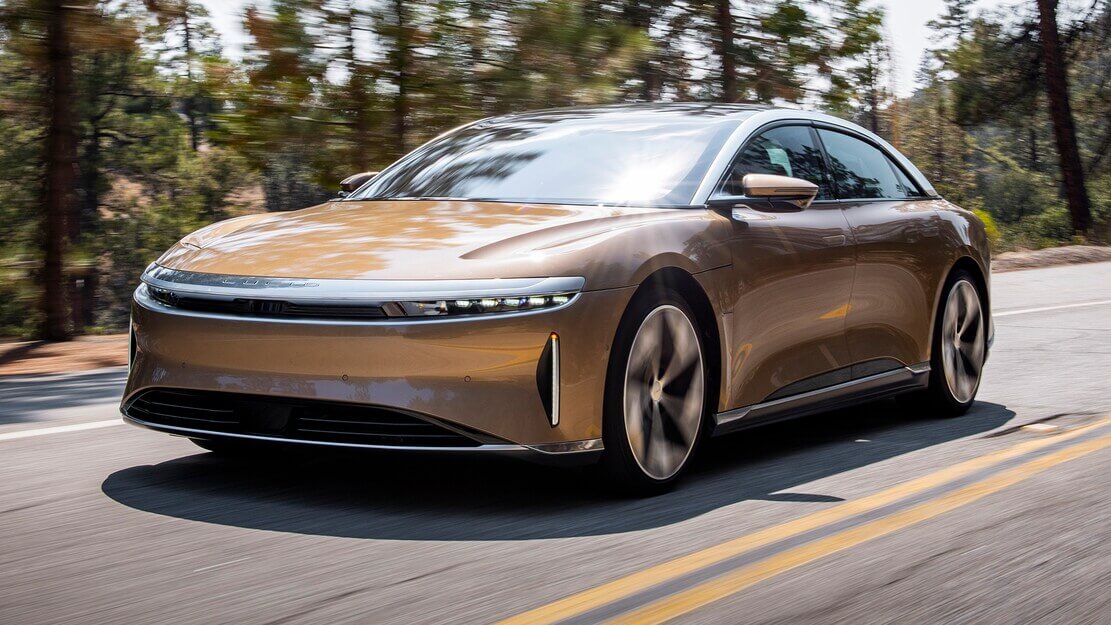 Behind Tesla comes Lucid Motors, located in Newark, Calif. Lucid combines all electric luxury with performance and is developing smart vehicles that display all the features of traditional internal combustion luxury cars. Lucid Motors’ vehicles are capable of 0-60 in less than 2.5 seconds, and have a charging time of only 20 minutes if properly equipped. How important is Lucid? Important enough to snag the 2022 “Motor Trend Car of the Year” award, something every car manufacturer desires.

Rivian is the third major force in electric vehicle production, with its home office located in Irvine, CA. Its R1T truck and R1S SUV are both impressive all-electric vehicles featuring everything a consumer expects in a modern day electric vehicle. Rivian explains, “From the hottest places to the coldest – from 130ºF to -25ºF – Rivian battery systems are built to explore, delivering between 260 – 400-plus miles of range depending on the battery pack and motor selected.” This company makes up what I’ll call the Big Three of Electric manufacturers.

The Rivian R1T pickup is Motor Trend magazine’s “2022 Truck of the Year,” thanks to Motor Trend who explained, “Rivian went further in exploring the technical possibilities offered by its electric drivetrain. Many companies have talked about individual motors for each wheel and the traction and stability advantages they provide. But Rivian is the first production vehicle to bring the concept to market, and “knocked it out of the park.” Additionally, Tesla also won a Motor Trend “Car of the Year” award back in 2013 for its Model S. Congrats to all.

Although both Rivian and Lucid are far behind actual production sales compared to Tesla, look for these two companies to grow as we move toward the 2030-decade. As for numbers, Rivian has sold 2,500 vehicles the last two years (including ’22 sales) but is sitting on 83,000 consumers who have pre-ordered. Lucid delivered 577 vehicles in 2021, and is at the birth stage of production. It expects to be able to handle 90,000 vehicles per year in the future.

As for the history of the motorcar here in America, from 1900 to 1919, some 2,000 American companies were involved in the separate construction of motor vehicles. Henry Ford receives credit for the first mass-produced car in 1908 (the Model T). Ford relied on the Model T until 1927, and actually shut down his plant several times to re-tool for the Model A. 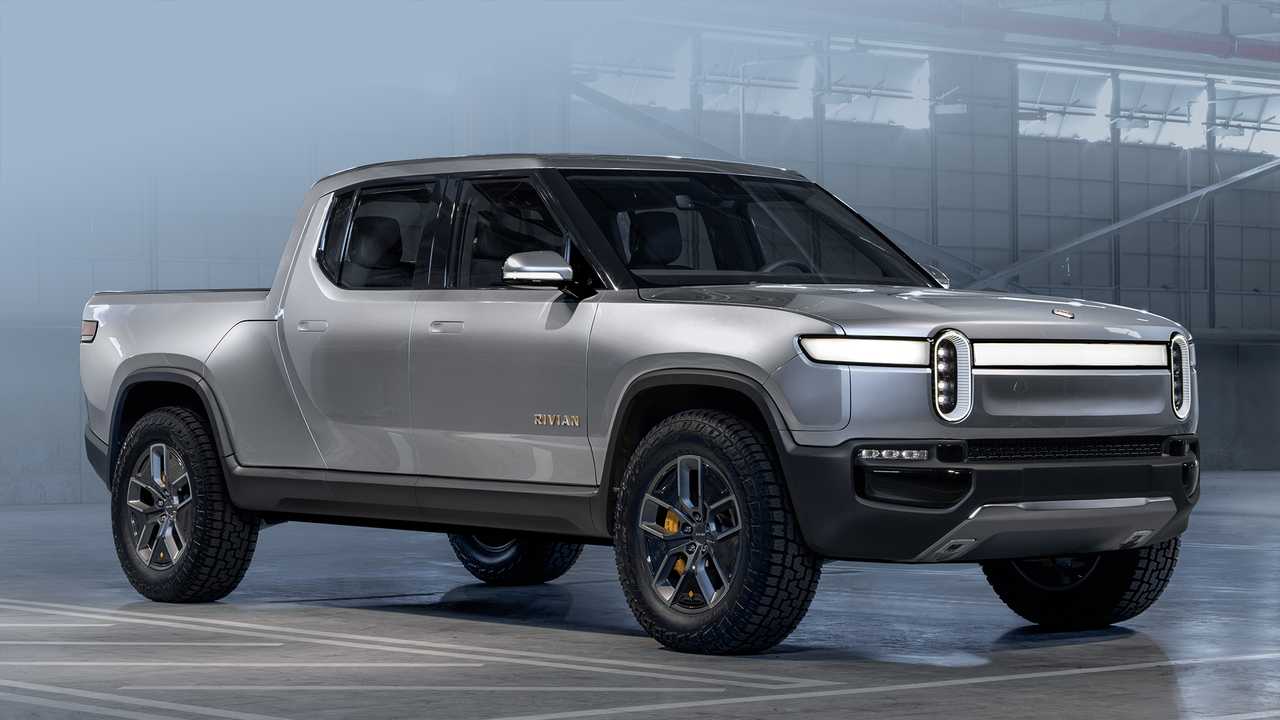 This 2022 Rivian pickup truck won the 2022 Motor Trend “Truck of the Year” thanks to its four electric motors (one for each wheel) and numerous other innovations that led the magazine editors to bestow the award. (Rivian)

Through it all, the competition caught up to Ford’s brilliantly produced automobiles. As smaller companies folded, larger concerns forged ahead. General Motors, founded in 1908, became a giant as it utilized even better production methods than Ford. GM gobbled up Oakland (Pontiac) in 1909, so it always had long-term strategic marketing on the table. However, Ford adapted well to GM’s threat, and the two went head to head for superiority.

A third powerhouse, Maxwell, continued its climb and in 1925 became Chrysler Corporation, which then bought Dodge in 1928.

These companies formed the “Big Three” that we have come to know today. They wheeled their power and price as the number of U.S. car companies by 1929 had shrunk to 98. During the 1930s, this number dwindled to 44.

At the beginning of the 1940s, Chrysler, Ford and General Motors accounted for 90 percent of all U.S. car sales, with the rest divided between Packard, Hudson, Nash-Kelvinator, Studebaker, Crosley and Willys-Overland / Jeep.

In the early ’50s, Tucker and Kaiser-Frazer joined the fray. Nash-Kelvinator, which also produced the Rambler, merged with Hudson to become American Motors in 1954, while Studebaker and Packard also joined forces in 1954 and lasted until 1963. 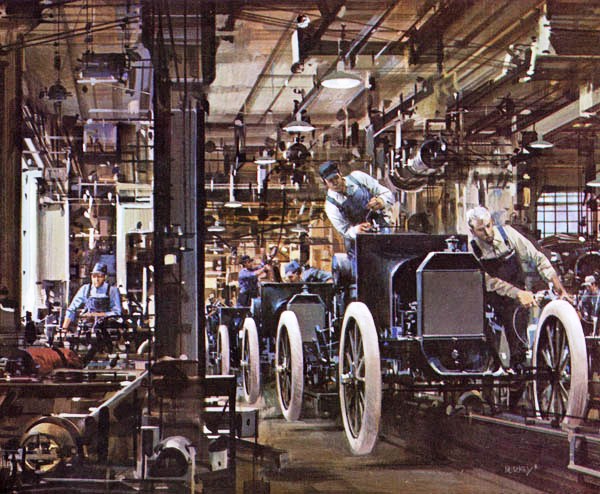 Although not electric, Henry Ford’s assembly line in 1908 provided workers with a fine paying job and allowed the middle class to afford a car instead of a horse and buggy. (Ford)

Crosley closed its doors in 1952, while Kaiser purchased Willys-Overland and lasted until 1955 as a car builder. In 1956, Kaiser concentrated on the Willys-Overland Jeep and Jeep truck/station wagon vehicles. The company was re-named Kaiser Jeep Corporation until 1970, when Kaiser sold the Jeep line to American Motors and exited the car / truck manufacturing business. Preston Tucker made just 51 of his famous car, recounted in the movie “Tucker,” which I still recommend as must viewing for car fans. Today, 47 Tuckers still survive and are precious collector gems.

By 1976, only 11 car companies were left, with many consolidating their businesses. Checker Motor Company, famous for its taxicabs, hung on in auto manufacturing until 1982 as one of the last independents, relying on Chevrolet engines and transmissions in its final years. Checker Motors produced underbody stampings for the “Big Three” at its home plant in Kalamazoo, Michigan, although, not surprisingly, it did file for bankruptcy protection and reorganization in January of 2009. Today, Checker is but a memory and I recommend reading about the Checker in books written by Ben Merkel titled “Checker The All-American Taxi” and “The American Taxi: A Century of Service.”

Chrysler gobbled up American Motors in 1987, acquiring the popular Jeep line as the trump card. Then, Daimler AG, parent of Mercedes-Benz, bought Chrysler in 1998, only to unload it in 2007 to Cerberus Capital Management LLC, a private American company. Chrysler is now part of the gigantic French based PSA Group, which formed Stellantis in January of 2021. Stellantis now has 17 vehicle brands and is the fourth largest car producer in the world.

That will do it William, and thanks for your letter.

(Greg Zyla is a syndicated auto columnist who welcomes questions on auto nostalgia, collector cars or motorsports at greg@gregzyla.com.)

Be the first to comment on "Collector Car Corner; Going electric and American car company history"