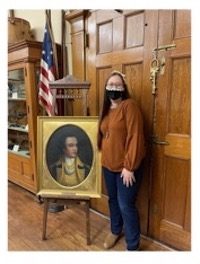 Born in Woodhall, N.Y., he was a painter of landscapes, portraits, and numerous Indian subjects with few surviving works. Well known in the region for his many depictions of the American Southwest. He also painted many watercolors and pastels of scenes from upstate New York.

Marlatt, who was not a contemporary of Maj. General John Sullivan, used two different depictions of Sullivan to complete the work of art.

Following the Wyoming, Pa. massacre on July 3, 1778, General George Washington instructed Sullivan to march three brigades from Easton, Pa. to the Susquehanna River, and then on to Tioga (modern day Athens). With Sullivan so ordered in 1779, General James Clinton’s New York Brigade was to march down the Susquehanna to meet Sullivan at Tioga, destroying all Native American villages on his route.

Sullivan’s army was to have totaled 15 regiments and 5,000 men, but his Pennsylvania brigade entered the campaign more than 750 men short, and promised enlistments never materialized. Sullivan’s army, including two companies of local militia totaling only 70 men, never exceeded 4,000 troops.

The army marched slowly, paced by both the mountainous terrain and the flatboats carrying the army’s supplies up the Susquehanna, and arrived at Tioga on Aug. 11. They began construction of a temporary fort at the confluence of the Chemung and Susquehanna Rivers, which they called Fort Sullivan. They occupied the fort until Oct. 3 of the same year.

The homelands and infrastructure of Iroquois life had been devastated by Sullivan’s campaign. In the long term it became clear that the expedition broke the Iroquois Confederacy’s power to maintain their former crops and utilize many town locations; the expedition appeared to have caused a famine and the dispersion of the Iroquois people. Much of the native population of these lands would move to Canada, Oklahoma, and Wisconsin.

In the wake of the Treaty of Paris (1783), European-Americans began settling the newly vacant areas in relative safety, eventually isolating the remaining pockets of demoralized Iroquois into villages and towns cut off under land treaties with New York State.

Tioga Point Museum, located at 724 S. Main St. #2, in Athens, Pa. welcomes the community to visit them Tuesdays and Thursdays, from noon to 8 p.m., to learn more about Major General John Sullivan. You can also visit www.tiogapointmuseum.org to learn more.