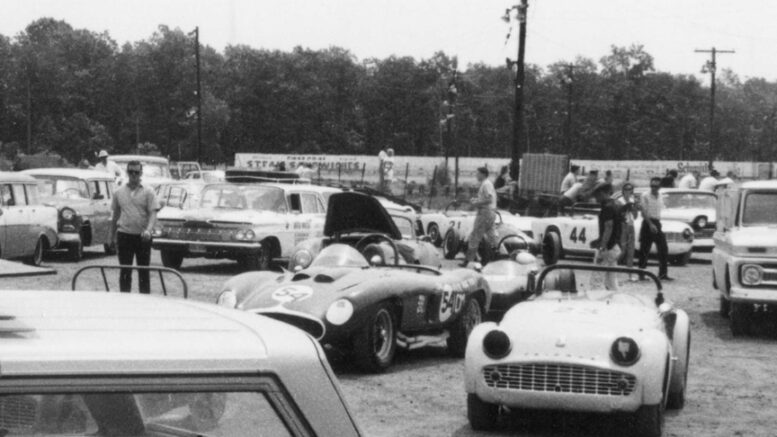 Here is the infield of the SCCA races at Vineland Speedway. A sharp eye will notice the Bob Tullius owned Triumph 44 and Oscar Koveleski’s Ferrari-Chevy No. 54. Koveleski would go on to create noted model and slot car company Auto World from his home in Clarks Summit, Pa., while Tullius would nab several SCCA National Championships. (Vineland Speedway)

Q: Greg, how about your opinions on more foreign cars, like the Triumphs and especially the GT6? You mention you used to attend the races in Vineland, N.J., and I’ve seen some of the photos you have run featuring the SCCA monthly events at that track. My friend had a 1973 Triumph GT6 MK3 with a six-cylinder engine instead of the Triumph’s usual four-cylinder engines that powered the Spitfire models. What is a car like the GT6 worth today? Jim S., Westerly, R.I.

A: Jim, I’m happy to help. Let’s start with my experiences at the Vineland Speedway and its 1.8-mile fully sanctioned Sports Car Club of America (SCCA) road course, which was a popular destination when it opened for business in 1959.

My dad took a job in Vineland back in 1957 at the daily newspaper, called the Times Journal at that time. When dad got the family moved into the Chestnut Apartments, I remember you could hear the roar of racecar engines that first Friday night. I knew then my dad couldn’t have taken a job in a better place if you loved racing and cars.

Vineland turned out to be one of the hottest car enthusiast areas. From cruising the four-lane Landis Avenue nightly to the nearby speedway, all types of racing was taking place right under my nose. The speedway featured a quarter-mile dragstrip, a 1.8-mile SCCA road course, and 1/2-mile asphalt oval for modified stock cars.

Every Friday through Sunday, in the warm months, I was at that track enjoying and learning about all of the different types of racing presented. I’ve mentioned numerous times that the promoter of Vineland Speedway, Bill Nocco, was way ahead of the curve, as I can’t recall a facility back in the 1950s that featured three different tracks in an “all-in-one” motorsports setting.

By 1959 Vineland was also a full quarter-mile dragstrip thanks to its new SCCA road course. Featuring a super long straightaway, thanks to its new dimensions, it automatically allowed a suitable shut down area for the high-speed dragsters. Some of my fondest memories include watching Roger Penske win his first big SCCA Divisional at Vineland in 1961 in his new Birdcage Maserati Tipo 61; defeating Bob Holbert in his factory backed Porsche RS-61. (Yes, I was there.)

As for racing championships in the United States, I also saw Bob Tullius race at Vineland, he was the E/Production SCCA National Champion for Triumph in 1962. He then doubled up in 1963 and 1964 by winning two more SCCA National Championships in a D/Production TR4. The Tullius Triumphs were all numbered 44 for its corporate racing name, Group 44 Racing. (See the photo from Vineland.)

In straight-line action, all the big drag racing names from that era raced there, including Dave Strickler, Ronnie Sox, Harold Ramsey, Malcolm Durham, Hayden Profitt, K.S. Pittman, and many more. The dragstrip featured a “hump” half way down the dragstrip where the banked fourth turn of the oval met the straightaway of the strip. If drivers were running real fast cars, some had to lift although many never did. Still, it was a full quarter-mile track and I was there when Joe Jocono ran his first 9.99 quarter-mile with his Buick nailhead-V8 dragster. Early day racer and engine wizard Jack Kulp from the Penndel/Bristol area of Pennsylvania ran Vineland regularly, as did hometown legend and three-time NHRA Champ Pete Shadinger.

On Friday night the stands were packed for the weekly modified stock cars, and my hero, Elton Hildreth, raced to many 25-lap feature wins against drivers like Frankie Schneider, Wally Dallenbach, Joe Kelly, Al Tasnady, Tommy Elliott, Pete Frazee and other notables of the asphalt oval era. I also recall the talents of Jim Delaney, who had the ability to come in and dominate, including a big win in a Langhorne Speedway qualifier race. I recall Delaney started near the rear and won going away in the white with red numbered No. 3 sedan. I also remember attending the yearly Joie Chitwood thrill shows at Vineland and the special 100 lap late-model stock car races, too. 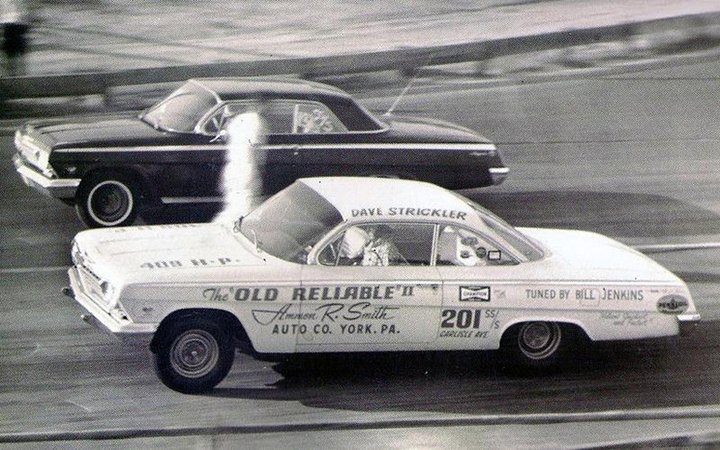 If drag racing were your cup of tea, every Saturday night would find some of the biggest match race stars of the day competing at the Vineland quarter-mile track, along with hundreds of the local drivers. (Times-Journal)

As for the 1973 Triumph GT6 MK3 you mention, it was the last year British Leyland produced that model; they were the corporate head for those neat Triumph sports cars. The Spitfire you mention is a hardtop model, conceived from the Spitfire convertible that debuted in 1966. Both ragtop and hardtops received a redesign when the Triumph GT6 arrived at dealers in 1970.

Beginning in 1970, instead of the four-cylinder Spitfire design the GT6 MK3 arrived with an inline 6-cylinder 2.0-liter that put out 95 horsepower. With a curb weight of only 1,936 lbs., the little car could run up to a top speed of 113-mph thanks to its featherweight design, and accelerate to 60-mph in about 9.5-seconds (with a good shifting driver behind the wheel). Notable are the early 1950s TR models, which were all four-cylinder powered prior to Triumph starting to utilize an inline-6 in some of the TRs in 1961. By the time Triumph TR 5, TR250 and TR6 arrived the inline-6 was the standard engine.

To the disappointment of many Triumph enthusiasts, however, the last U.S. models were hampered by government intervention that resulted in lower compression engines because of the mandated use of lower octane unleaded gasoline. Of course, all car manufacturers experienced the same fate, as the years 1973 through 1980 weren’t known as “performance years” by any means. 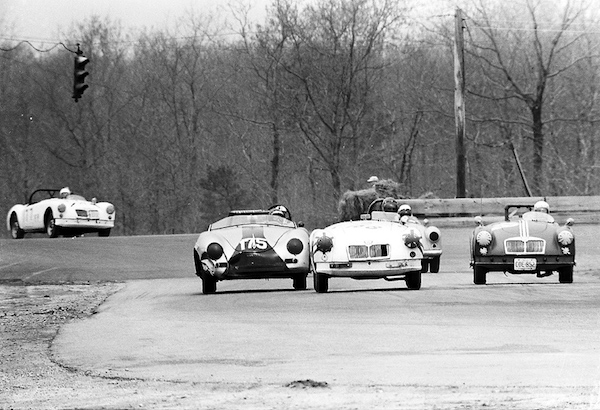 This photo of the smaller bore sports cars features many makes and models of the day that are still popular to this day in vintage racing. (Times-Journal)

On the country’s road racing tracks countless Triumphs, including the Spitfire and the TR-style models you mention, competed regularly in the SCCA classes of competition. Many compete to this day in historic races, like the SVRA vintage events that are held coast-to-coast and highly recommended by this scribe.

Along with Triumph’s numerous TR-series models, the Spitfires weren’t far behind in popularity. Most of these Triumphs were built to compete head-to-head with the other foreign models, namely Austin Healey Bugeye Sprites, smaller bore Porsches, Austin Healey 3000s, MGA, MGB, and Morgans. I saw many of the TR2, TR3 and TR4 Triumphs compete from 1958 through 1965 at Vineland, with 1965 being the final year of those spectacular TR4s.

On the world-racing scene, perhaps Triumph’s biggest “triumph” was a first in class and 13th overall at the 1965 LeMans 24-hour race in France. Drivers Jean-Jacques Thuner and Simo Lampinen drove a race only prototype Triumph Spitfire 4 Mk 1 to the victory. This big class win led to the development of the consumer production six-cylinder Mark I GT6 in 1966 and I’ve always felt Tullius winning here in America coupled with the LeMans Spitfire win really pushed up the popularity and sales of Triumph sports cars during that period. 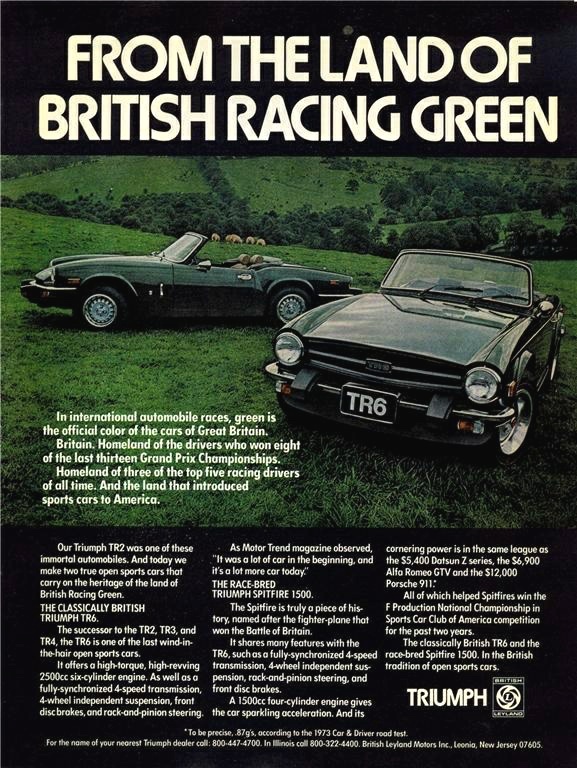 The Triumph GT-6 MK3 and the TR6 were some of most popular British sports cars of the 1970 era. They featured inline-6 cylinder engines. (British Leyland)

Unfortunately, Triumph will never be a collector car in high demand. The ’73 Spitfire GT6 MK3s base price was $3,955 and currently is listed on NADA Classic Cars from $6,450 low retail to $19,900 high retail with an average of $11,750. These prices allow for an excellent choice to enter the collector car hobby. As I’ve mentioned in prior features, many Triumph clubs exist and I still recommend the Vintage Triumph Register at https://vintagetriumphregister.org.

Thanks for your letter Jim, and for allowing me to relive my days at Vineland Speedway and the Triumph sports cars.

(Greg Zyla is a syndicated auto writer who welcomes reader inquiries and questions on collector cars and motorsports at greg@gregzyla.com or at 303 Roosevelt St., Sayre, Pa. 18840) 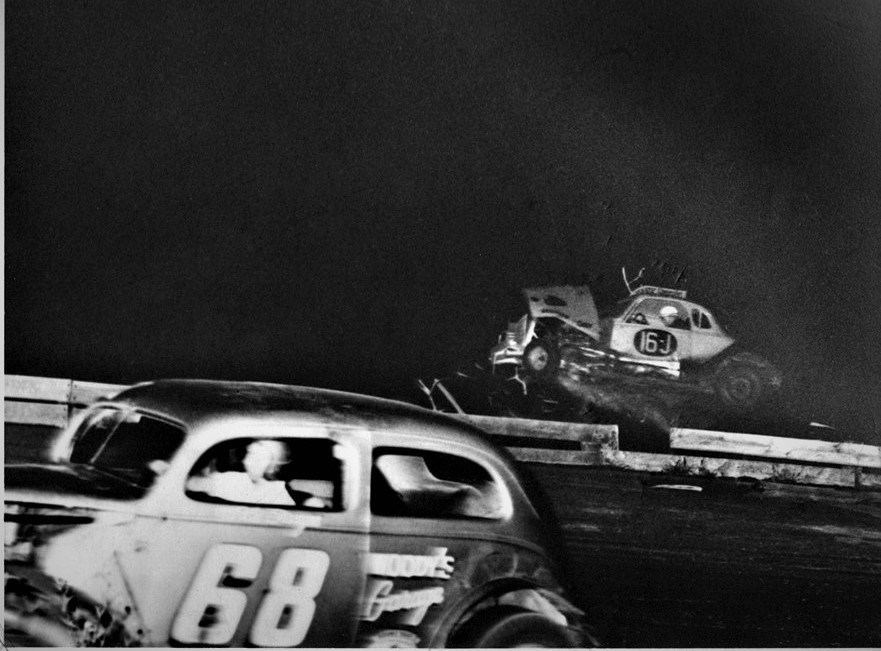 Things were pretty wild every Friday night at the Vineland Speedway’s modified stock car races. Here Elton Hildreth in the 16-J goes “out of the ball park” after colliding with fellow antagonist Pete Frazee in car 68. (Times-Journal)

Be the first to comment on "Collector Car Corner; Triumph Sports Cars and Vineland Speedway memories"