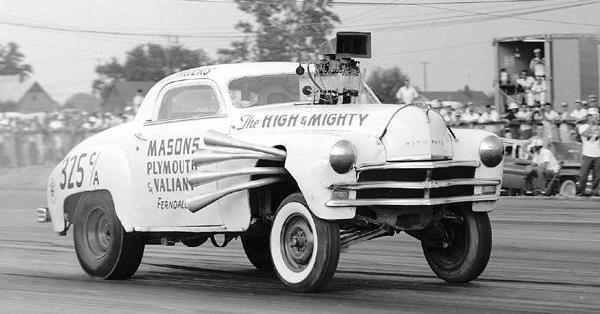 Early shot from the late 1950s of the Ramchargers “High and Mighty” 1949 Plymouth business coupe, powered by a 354 Hemi engine. It was an ugly duckling back then, but sure ran well. By 1961 the team moved to current day MOPAR Super Stock cars and made a big name for themselves. (Compliments Chrysler / Ramchargers)

Q: Greg, I’m a big fan of the muscle car era and especially the year of 1962. I remember those 413 Dodge and Plymouths and knowing you grew up during this era, can you tell us about your memories of this great high performance year? Chevy, Pontiac and Ford also has some really nice muscle cars that year, too. Thanks and I look forward to reading your nostalgia memories in the Owego Pennysaver newspaper. John P. of Owego, N.Y. and Gary Makin, Southbury, Conn. via Facebook. (Two similar questions.)

A: John and Gary, I fully agree that the year 1962 was “the year” that muscle car performance kicked off in high gear. I quickly recall sitting with my friends in the grandstands at the hometown Vineland Speedway drag strip watching the new 1962 models drag race. In my circle, it was a given we would spend every Saturday during the season at the drag strip and we got there when it opened and left after the final run of the night. At just 13 years old in ’62, it was a spectacular time to experience thanks to these all-new performance cars.

The four brands that come quickly to mind are the 413 Dodge / Plymouths you mention, followed by the 409 Chevy, the 406 Ford and the 421 Pontiac. These were the muscle cars that came to market in full high performance blossom and started a craze that to this day has countless collectors willing to pay big money to park one in their garage.

The 1962 Pontiac Super Duty 421 was one of the early muscle cars that set the pace on the nation’s drag strips. Rated at 405 horsepower, the two four barrel version was really cranking out an easy 450. Pictured is a restored 1962 SD 421 Catalina driven by Jim Wangers. (Compliments Royal Oak Pontiac)

Although 1962 is the pivotal Detroit inspired muscle car year, many of these cars were developed in 1961 and some, like the 409 Chevy, found their way to the dealership. Those 409 Chevys were already match racing in 1961 thanks to Dyno Don Nicholson and Dave Strickler with Bill Jenkins, all drag racing legends. Still, it wasn’t until 1962 that mass production took over and it was the only year a Chevy fan could buy a 409 in three distinct roof styles, ala the larger Impala hardtop, the bubble-top BelAir (most popular 409) or the Biscayne lip-top.

Over at Chrysler Corporation, the 413 Dodge Dart and 413 Plymouth Savoy were immediate winners at the track and popular choices, especially for those who weren’t that good at speed shifting a 4-speed manual. Thanks initially to the group of Chrysler employees called The Ramchargers, and its capable drivers like Herman Moser and Jim Thornton, these 413 and then 426 Super Stock Dodge were big winners, especially with the 727 three-speed automatic.

I can’t forget the Pontiacs. They were already more than formidable with a 389 Tri-Power under the hood through 1961. Then, later in ’61, Pontiac released a powerful Super Duty 421 that was a dealer-installed option. Rated at 405 horsepower with two four barrels, the engine easily put out 450 ponies and these Pontiacs were terrors on the drag strip, especially in 1962 and 1963. One of the stars at our track was Harold Ramsey, who made a big name racing the lightweight “Swiss Cheese” 421 Super Duty Pontiacs out of the Union Park Pontiac in nearby Wilmington, Delaware. In addition to Ramsey, other Pontiac teams I remember were Arnie “The Farmer” Beswick’s numerous Pontiacs and Jim Wangers in his Royal Oak, Michigan Royal Bobcats.

Pontiac’s Super Duty 421s were very powerful, but the prices and heavier weight of Pontiacs were more than the Chevys, Fords and MOPARS, so they were in the minority at the drags in the 1962 Super Stock classes. Notable, too, is the 421 Pontiacs were unbeatable in NASCAR as Fireball Roberts took Smokey Yunick’s black and gold ’62 Pontiac to a clean sweep of Speedweeks in 1962, winning the pole, the qualifier race and then dominating the Daytona 500.

Under the hood of the 1962 Dodge and Plymouth super stocks sat a 413, dual-four that was rated at 410 horses. If you couldn’t shift a four-speed, this was your choice as many an automatic was quicker and easier to drive than the manuals. Pictured is the 1964 Ramchargers Dodge Dart 1/18 model die cast that I proudly own. (Greg Zyla photo)

Ford was also in the game as in 1962 you could order a 406-inch, 405-horse tri-power in your full size Ford and take on everyone at the drags. Although the slowest of the bunch, the 406 Ford quickly got an engine upgrade to a 427 two four-barrel design and things improved dramatically at the match races. Drivers I remember include Dick Brannan, Gas Rhonda and Les Ritchey in competitive Fords.

By today’s standards, all of these 1962 muscle cars were built on larger car platforms as the move to smaller cars was just taking off in the form of Falcon, Comet, Valiant, Lancer, Tempest and Chevy II from 1960 to 1963.

As much as I loved the 409 cubic inch / 409 horsepower ’62 Chevys, I will admit that the lighter weight 1962 Dodge and Plymouth with the 413 wedge 410 horsepower engines were really the hot ones right off the factory floor. They came with factory exhaust cutouts to quickly uncap and bypass the mufflers and The Ramchargers figured out that with proper high stall converters, these automatic 413s could launch better than any four speed of the day. Consumers really could “buy today and race tonight” even if they couldn’t work a clutch and shift well. Notable is that from 1961 through 1965, everyone still desired four-speeds over automatics until those 1962 413s arrived. (If you could speed-shift with the best of them you were usually tabbed as a “hired driver” at the late night street races, of which there were many). 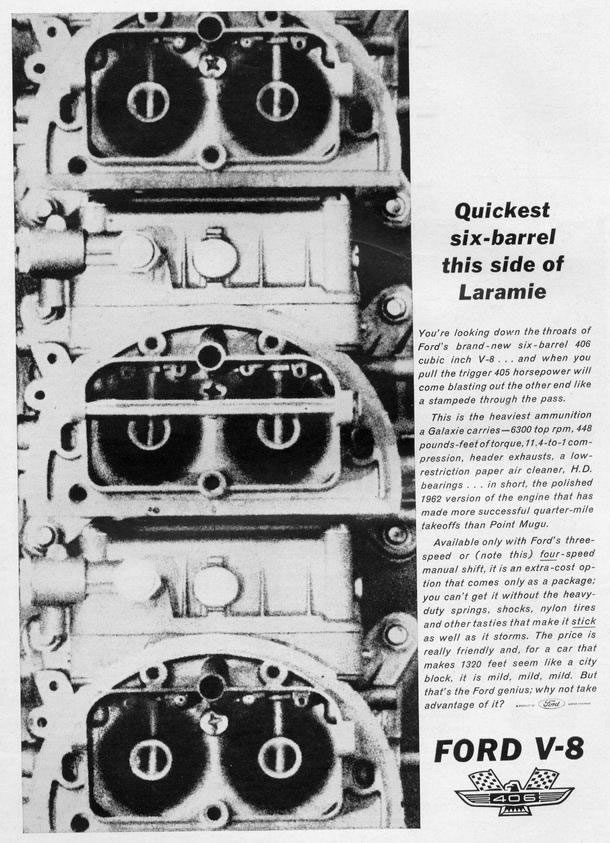 The 1962 Ford muscle car featured a full size chassis and a 406-inch V8 rated at 405 horses with three two-barrel carbs. The engine grew to 427 quickly, and the tri power was replaced by two four barrels. (Compliments Ford Motor Company)

The popularity of the heavier full-size muscle from 1961 through 1963 quickly faded as in 1964 it was mid-size “full-speed-ahead.” Led by the ‘64 Pontiac GTO, Chevy Chevelle and Ford Fairlane quickly followed, although it took several more years for MOPAR to join the mid-size popularity as its 426 Hemis and 440 V8 MOPARS were still utilizing near full-size muscle cars (Roadrunners, Super Bees) that were so powerful they easily put away many a SS396 Chevelle and Pontiac GTO midsize class competitors.

These mid-size muscle cars then gave way to the pony cars, ala Mustang, Firebird, Camaro, Barracuda, Challenger and AMC Javelin / AMX that were sold side-by-side with the mid-size cars until the muscle period officially died in 1974.

In ending, the year 1962 sticks out like no other as the year you could walk into your dealer, plunk down the cash and drive out with a 13-second super stocker that you could race that same evening.

If you were sharp, knew how to shift (if it was a 4-speed), understood rear end gearing, knew some ignition timing tricks and how to set valves (for solid lifter engines) following the installation of exhaust headers, you were for sure running in the 12-second range. And, times like this back then in a factory super stocker meant you became an instant “in-demand” match racer (if you wanted).

That’s how things were in 1962, the best year of Detroit-inspired high performance I can remember.

(Greg Zyla is a syndicated auto columnist and he welcomes reader inquiries at greg@gregzyla.com, his Facebook account, or through his homepage at zylamotorsports.com.)

Be the first to comment on "Car Collector: 1962 was the pivotal year for the muscle car movement"