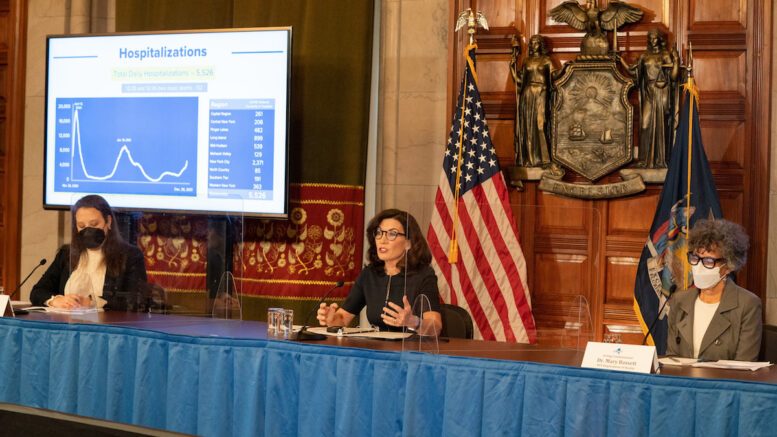 “As we head into the holiday weekend, New York State is mobilizing every resource at our disposal to fight the winter surge and keep New Yorkers safe,” Governor Hochul stated in an earlier release, adding, “We can get through this surge through targeted actions, partnerships with local leaders, and by taking common sense steps to keep us all safe: get vaccinated, get boosted, and wear a mask indoors.”

“We have every tool to keep our families and communities safe,” Acting State Health Commissioner Dr. Mary T. Bassett said. “We must ensure we use them all. Governor Hochul’s targeted plan to expand vaccination and booster access, mask and test, and increase measures to protect our health care workers is the comprehensive strategy needed to combat the fast-spreading Omicron variant. Leveraging these layered mitigation tactics is how we will protect the health of New Yorkers and effectively manage the winter surge.”

After two years of remote learning and school closures, Governor Hochul is focused on keeping students in school in the upcoming year. The first plank of Governor Hochul’s 5-part plan includes providing tests to students and school districts: 5.56 million tests arrived for schools this week and between six and seven million more are expected to arrive in the coming days. New York has mobilized 40 trucks and 86 state personnel to distribute tests. Overall, New York State has secured 37 million tests for distribution.

Also, Test-to-Stay policies have proven successful at keeping kids safe, according to Governor Hochul, and schools open. If a student tests positive, classmates can take a test kit back home with them and return to the classroom upon receiving a negative result instead of mandatory quarantining.

Keeping college students and faculty safe is another school effort being recommended. SUNY and CUNY will be introducing a new requirement for all students to get boosters, campuses will require mandatory mask wearing in public indoor spaces, and will require all faculty to be vaccinated. Students will also be required to submit negative tests upon returning to campus.

Governor Hochul has repeatedly stated that to stop the spread of the virus, New Yorkers must continue wearing masks and getting tested for COVID.

With case counts rising, Governor Hochul is making it a priority to prevent severe illness and death by supporting the state’s hospital system. The Winter Surge Plan 2.0 will distribute antiviral treatments. According to Governor Hochul, New York is working with the Biden Administration to secure doses of the antiviral drug Pavloxid, and make this treatment more widely available.

Governor Hochul will continue enforcing the Nov. 26 Executive Order to boost hospital capacity. Since it took effect, the number of hospitals with limited capacity needing to pause non-essential surgeries has declined from 32 to 21.

Governor Hochul has also set plans in place to launch National Guard EMT training. To ramp up long-term health care workforce capacity needs, the Department of Health and the Division of Military and Naval Affairs launched two pilot EMT training classes on Jan. 5. This will cover two classes of 40 service members (80 service members in total) who will be able to be deployed by February.

In the coming days, the state will receive federal Department of Defense (DoD) Medical Response and Disaster Medical Assistance Teams (DMATs). This will include a 35-member DMAT to SUNY Upstate in Syracuse, a 23-member DoD Medical Response Team to Erie County Medical Center in Buffalo, and 50 new ambulance teams deployed to New York City.

The Hochul Administration is also in constant contact with all 606 nursing homes in New York and will be providing them with additional PPE to ensure the safety of all patients and staff. Additionally, the Administration is coordinating with hospitals and will be deploying durable medical equipment in continued support of the care for all New Yorkers.

In a prepared release, Governor Hochul stated, “Vaccines continue to be the best defense against COVID hospitalization and death. While 95% of adult New Yorkers have received at least one shot, there’s more to do to increase vaccination and booster rates, especially among children.”

New York will begin requiring each nursing home to demonstrate their plan to increase vaccination and booster rates among their residents.

The most unvaccinated eligible cohort is New Yorkers aged five to 11. New York will increase its focus on pediatric vaccination, according to the governor’s plan.

The state anticipates approval of Pfizer’s booster shot for children aged 12 to 15, and will immediately begin outreach to that population once ready.

From the beginning, Governor Hochul has emphasized that the fight against COVID must take a collaborative approach. Fighting the winter surge requires close collaboration with local partners, the governor’s administration outlined.

From New York City to Erie County, according to the governor, local leaders are making smart choices.

“We will continue this surgical, targeted approach,” Hochul wrote in her prepared release.

The release concluded, “Governor Hochul will continue to lead a whole-of-government approach to fight COVID, making sure county emergency managers and local school boards have the tests and masks they need.”

Be the first to comment on "Governor Hochul announces Winter Surge Plan 2.0    "