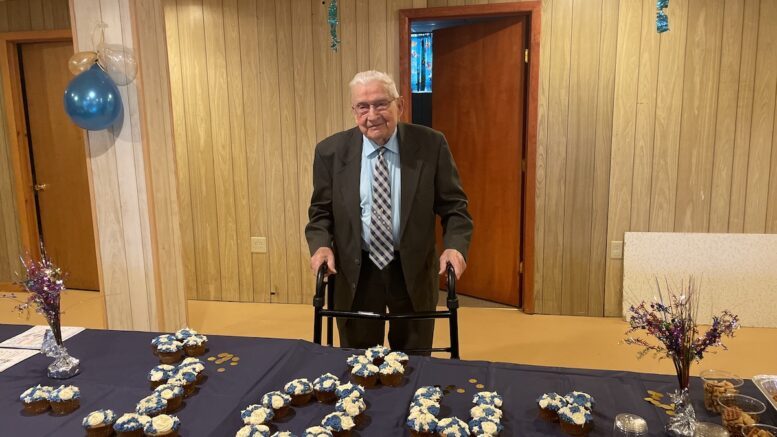 Gerald Hollenbeck is all smiles for his birthday celebration on Jan. 2. (Photo by Tegan Williams)

Sunday, Jan. 2, 2022 may have been a rainy, cold day, but a birthday party was underway at the Catatonk Baptist Church for lifelong resident Gerald Hollenbeck, who was celebrating turning 104 years old.

Friends and family surrounded Gerald Hollenbeck last Sunday, who was greeting everyone with his warm, huge, wonderful smile. He didn’t stop smiling the entire time. 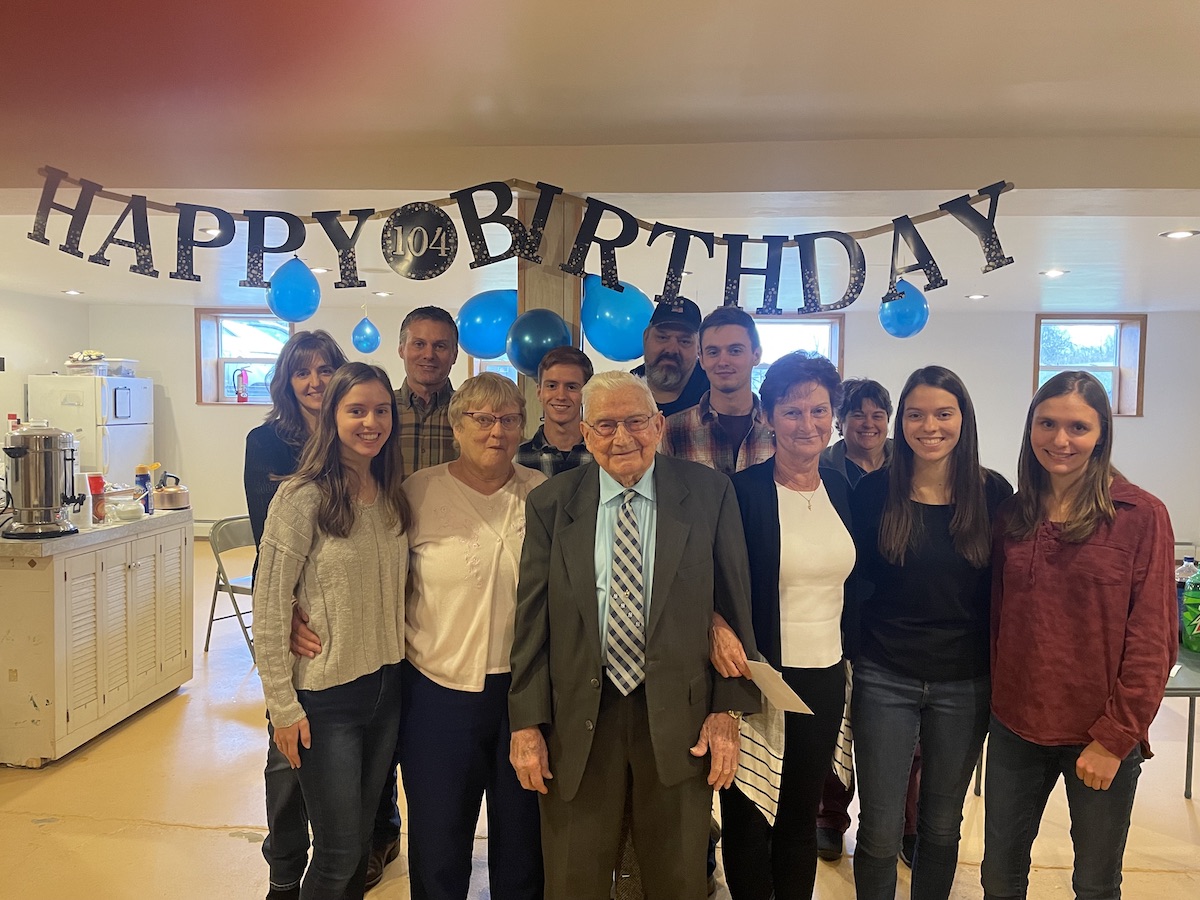 Gerald, along with family members including his children, grandchildren and great grandchildren, pose for a photo. (Photo by Tegan Williams)

He was dressed sharply to celebrate his birthday, along with his usual Sunday service at the church, stating, “The Lord is what has gotten me here,” adding, “Today is his day and I feel guilty for taking the attention away from him.”

Gerald was born on Jan. 2, 1918 to his parents, Arthur and Gertrude Hollenbeck, at their farm located on Eiklor Road in Candor N.Y. His Father Arthur purchased the Floyd Richards Saw and Feed Mill in 1926 when Gerald was just eight years old. This business later became a huge community staple in Catatonk.

Gerald would help in the saw mill after school as the saw mill was the larger of the two businesses; the mill was operated by water at the time and the water was held by Candor’s two dams and the grist mills in the day for tasks, and then released down the creek to Catatonk. This would be when they used the water at Hollenbeck’s Mill for sawing.

Gerald later went on to become partner with his father, and after graduating from High School; this is when the business became Arthur J Hollenbeck and Son Feed, Coal and Farm Supplies. 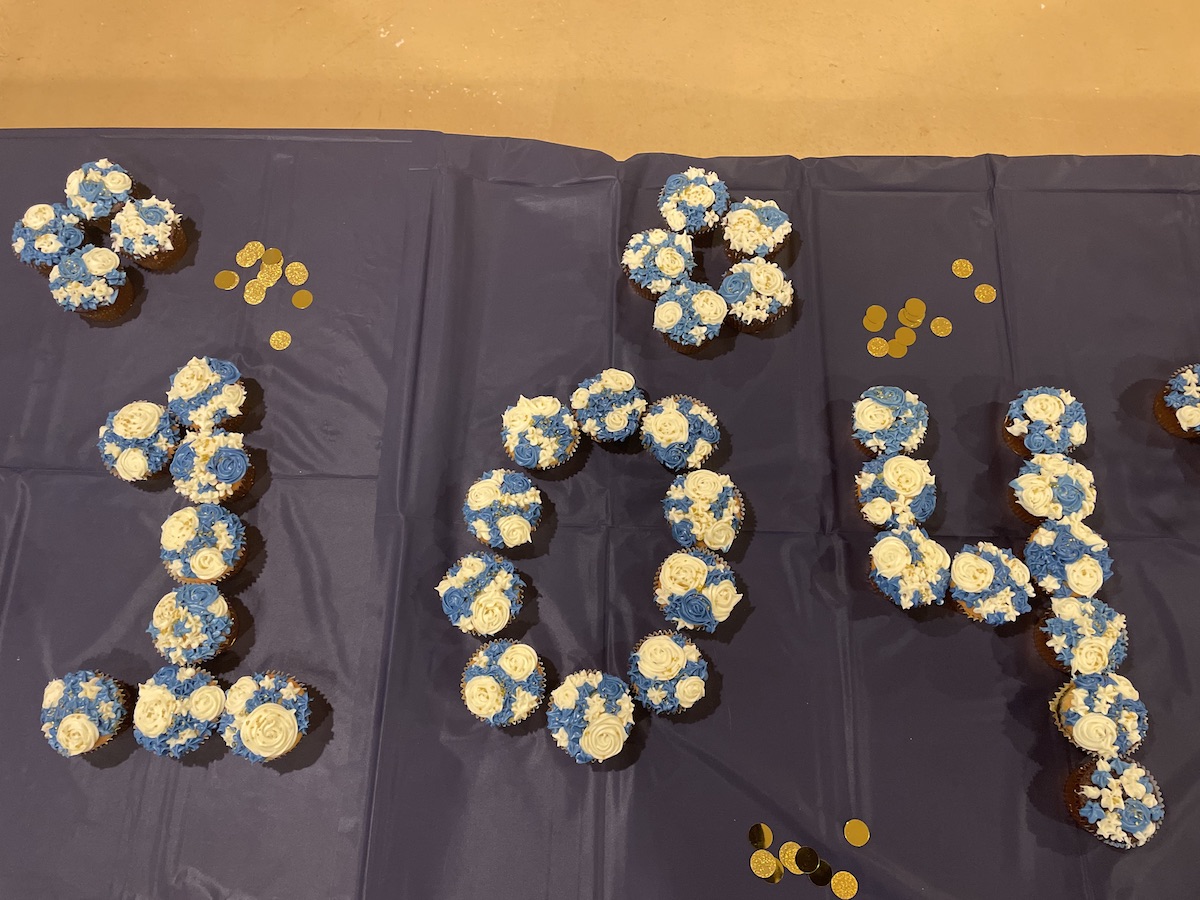 In 1990 the business was incorporated when Gerald’s son, Gary Hollenbeck, became a partner. Gerald married his wife Sylvia Jane Soper in 1942 and the two were married up until she passed in 2008 at the age of 90. Out of this marriage came three children; Ann Corson, Lynn McCormick, and Gary Hollenbeck. Then came five grandchildren, Jerry, Rodney, Traci, Lisa and Micheal; which then led to 13 great grandchildren; Tyler, Cody, Austin, Jasper, Tori, Justin, Jessalyn, Jewel, Jadyn, Nathan, Gavin, Trey, and Ellie.

When we asked Gerald the secret to living such a long fulfilling life, and especially through a terrible pandemic, he stated, “The Lord, and getting my vaccinations and boosters.”

Gerald is living his life to the fullest and the pandemic never slowed him down; he continued to go to church and practiced safety the best he could, given the situations at hand.

Upon leaving the birthday celebration the family wanted me to hear his famous line that he tells his children, grandchildren and great grandchildren, “The first one hundred years were the best.”

Be the first to comment on "The first 100 years are the best; local resident celebrates 104 years strong"