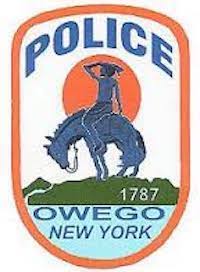 The Owego Police Department reported that during the week of Dec. 27, 2021 through Jan. 2, 2022 there were 62 calls for service, 18 traffic tickets issued, and they responded to one motor vehicle accident.

Scott A Rougeau, age 35 of Ithaca, N.Y. was arrested for Aggravated Unlicensed Operation in the Third Degree (Misdemeanor) following a Traffic Stop. Rougeau was issued an Appearance Ticket returnable to the Village of Owego Court.

Be the first to comment on "Owego Police Report"