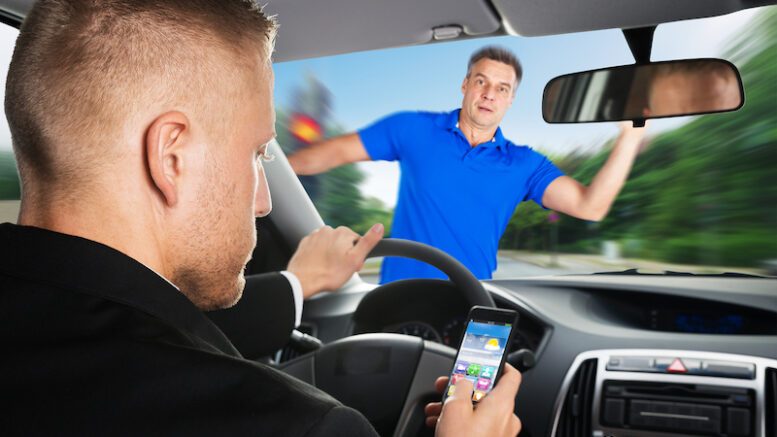 Last week we updated our yearly report on “The Saga of young Joe,” a 24-year-old who lost his life in an alcohol related single car accident in his 1968 AMC Javelin AMX.

This week we follow up with how Joe also became a statistic in the National Highway Safety Administration (NHTSA) group of fatalities filed under “distracted driving.” Because Joe was answering his smart phone when he was unable to negotiate a sharp curve at high speed, he adds to the distracted driving category of accidents that has grown to over 20% of all accidents reported, both fatal and non-fatal. Sadly, these numbers are rising as the youth demographic, already addicted to texting and cell phone use, receive their driver’s licenses each and every year.

According to NHTSA, there is some good news to start off our column this year. The percentage of passenger vehicle drivers talking on handheld phones decreased from 2.9% in 2019 to 2.6% in 2020. The percentage of drivers speaking with visible headsets while driving did not change from 2019 to 2020; both years were 0.4 %t. Drivers’ visible manipulation of handheld devices decreased from 2.9 % in 2019 to 2.8 % in 2020. These results are from the National Occupant Protection Use Survey (NOPUS), which provides the only nationwide probability-based observed data on driver electronic device use in the United States. NOPUS is conducted annually by the National Center for Statistics and Analysis (NCSA) of the NHTSA. The percentages provided in this research note are interpreted as the percentage of drivers nationwide during an average daylight moment.

Still, most of the NHTSA’s “distraction-affected crashes” data is very troubling. The organization lists “distracted driving” as any driver that texts, uses a cell phone, or eats and drinks while driving. Other forms of distraction include excessive talking to passengers, grooming one’s self, and even adjusting car stereo systems.

However, NHTSA stresses that sending and receiving text messages requires visual, manual and cognitive attention, and is by far the most alarming distraction drivers engage in regularly.

Further, NHTSA says more than an estimated 70% of teens and young people admit they have composed / sent text messages while driving, and now nearly 80% of teens and young adults say they have read messages while driving. Every driver on the road today surely encounters drivers weaving on the road while using their cell phones.

Clearly, texting is here to stay as individuals communicate via these multi-task cell phones daily. Currently, government stats conclude that every month some 170-billion text messages are sent in the U.S., Guam, and Puerto Rico territories.

Additionally, NHTSA information indicates that driver distraction continues to be a significant problem, given the difficulty of proof and a driver’s reluctance to admit texting / phone distractions, lack of witnesses, or death of the driver. NHTSA believes the actual number of distracted crashes could be much higher than the estimated 400,000-plus injured in distraction-affected crashes the last few years. 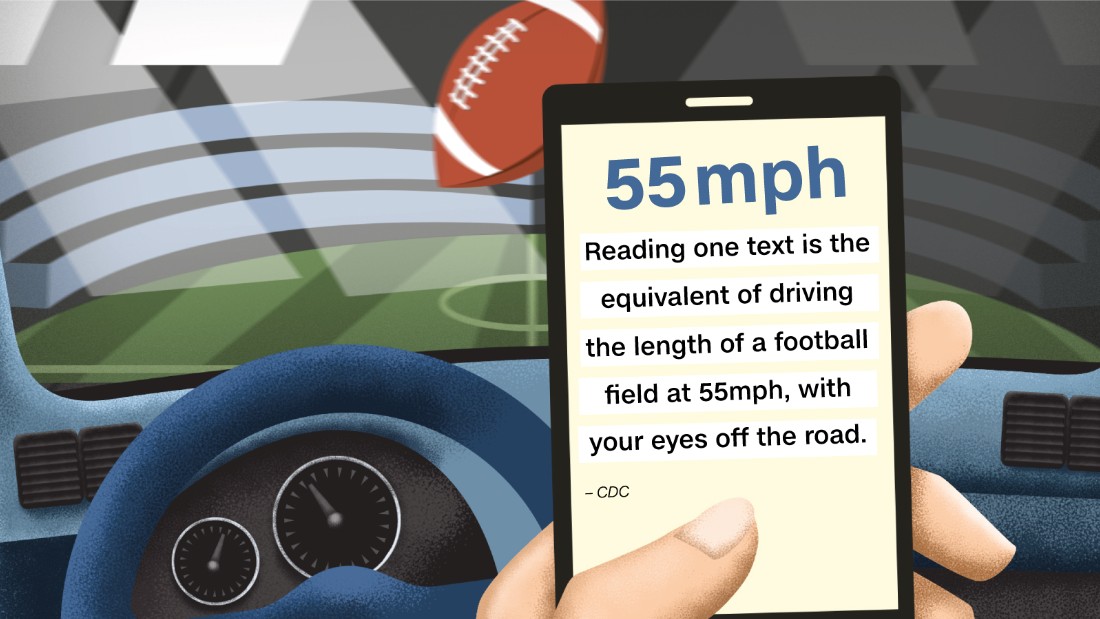 The U.S. Department of Transportation (DOT) continues to lead the effort to stop texting and phone use while behind the wheel. Starting back in 2009, numerous national distracted driving summits have and are being held resulting in the ban of texting and cell phone use for all drivers, not just commercial as previously reported last year.

According to NHTSA, the age group that produces the highest number of distracted drivers is, not surprisingly, the under-20 driver where 16% younger than 20 involved in fatal crashes were reported to have been distracted.

Further, the Center for Disease Control and Prevention (CDC) found that 39% of high school students who drove in the past 30 days texted or emailed while driving on at least one of those days. 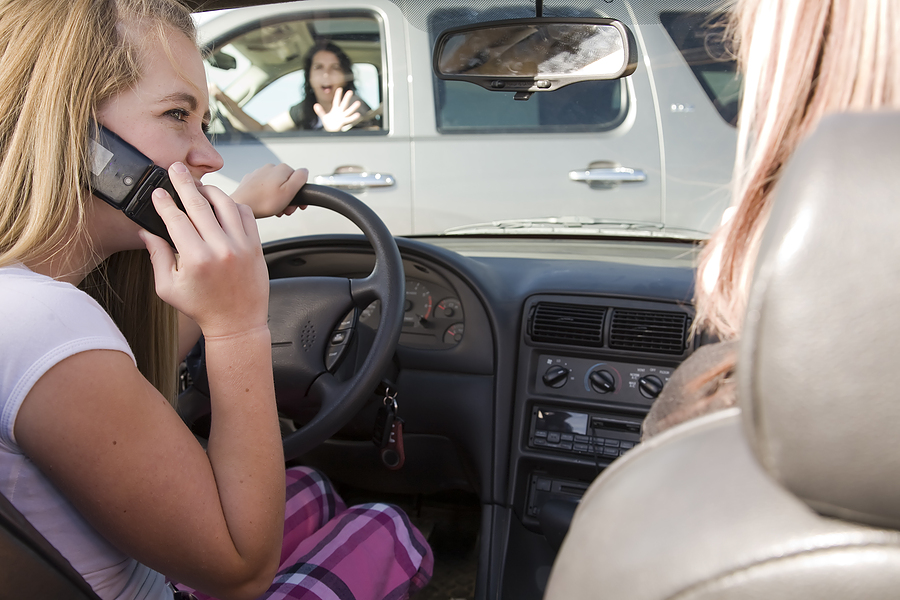 Here are some additional facts and recommendations about distracting driving:

1. Five seconds is the average time your eyes are off the road while texting. When traveling at 55-mph, that’s enough time to cover the length of a football field blindfolded (CDC).

3. At any given daylight moment, approximately 685,000 drivers are using cell phones or manipulating electronic devices while driving, a number that has held steady since 2010. Experts feel this number will rise and most recent stats found that that 4,000 were killed in distracted driving accidents for a 12-month period (NHTSA).

4. More than half (53%) of all adult cell phone owners have been on the giving or receiving end of a distracted walking encounter, like walking into oncoming traffic at intersections or into a decorative water pond in the center of a shopping mall (PEW Research).

5. The National Safety Council (NSC) claims that distracted driving is the leading cause of fatal crashes, and 40% of all workplace fatalities involved transportation incidents (U.S. Bureau of Labor Statistics).

6. Teens can be the best messengers with their peers, so we encourage them to speak up when they see a friend driving while distracted. Have friends sign a pledge to never drive distracted, to become involved in their local Students Against Destructive Decisions chapter, and sharing messages on social media that remind their friends, family, and neighbors not to make the deadly choice to drive distracted (NHTSA).

We’ll end these holiday columns with a note from www.thezebra.com about texting while driving. A survey on The Zebra indicates that eight of every 10 Americans agree that texting and driving is an addiction.

We need to take advantage of the campaigns available, starting in grade school, to implement and help curb the phone addictions. Educators are urged to contact the NHTSA for available program materials and videos to address the problem before students receive their permits to drive.

Drive safely and have a happy Christmas holiday season and New Year. Thanks DOT, NHTSA, NSC, NOPUS, CDC, Pew Research, The Zebra and the AAA for these statistics, graphics and estimates for our yearly safe driving columns.

(Greg Zyla is a syndicated automotive columnist. He welcomes reader questions and comments on collector cars and auto nostalgia at 303 Roosevelt St., Sayre, Pa. 18840 or email at greg@gregzyla.com.)

Be the first to comment on "Cars We Remember; The Saga of young Joe Part II: Texting and Distracted Driving"