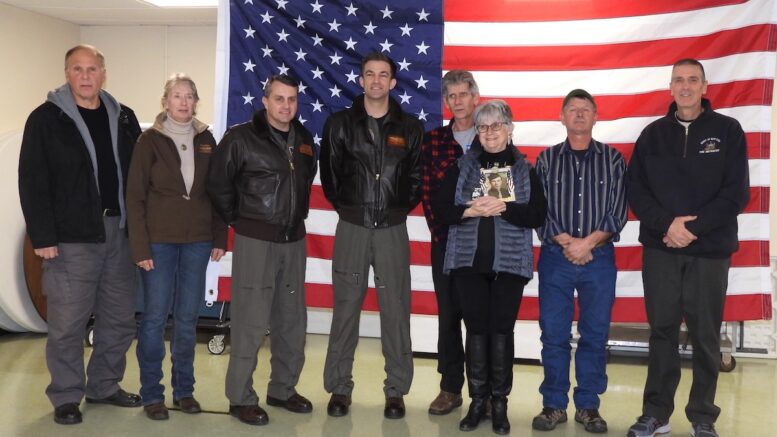 Lester Dunham of Owego was patrolling the docks at Pearl Harbor in the wee hours of Dec. 7, 1941.  Shortly after breakfast, and immediately after the first dive-bomber struck, Dunham risked his life to pull men out of the water, both alive and dead.

Seaman First Class Delmar Dale Sibley of Owego, and Tioga County’s first WWII casualty, was killed in action aboard the Battleship U.S.S. Arizona. He was 23.  This year, 2021, marks the 80th anniversary of the military assault by the then Empire of Japan on the United States at Pearl Harbor, Hawaii, which propelled the nation into World War II.

President Franklin Delano Roosevelt’s immortal words, “A date which will live in infamy,” have been everlasting.

Today it is cause for all of us to pause, reflect, and vow to never forget the heroism and sacrifice endured on Dec. 7, 1941.

Veterans and guests gathered on Dec. 7 for a remembrance ceremony at the Delmar Dale Sibley Memorial Hall within the V.F.W. Glenn A. Warner Post 1371, located on Main Street in Owego. 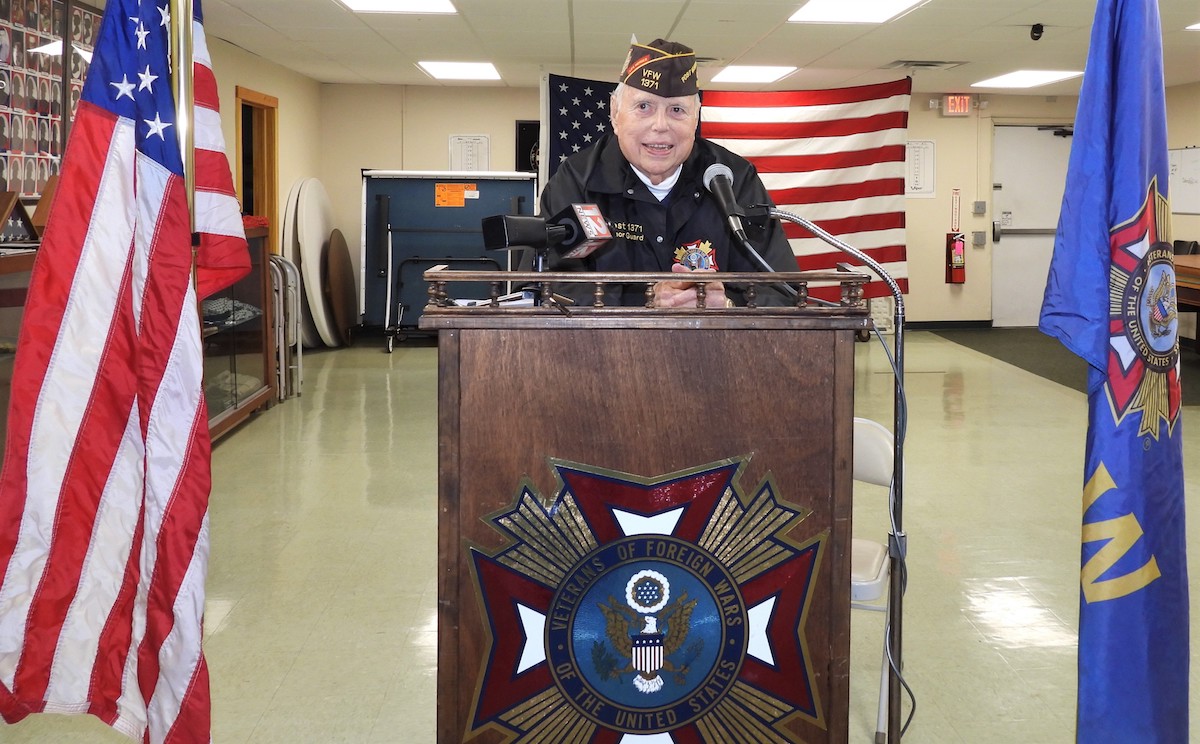 Several guests were invited to speak at the ceremony, including Candor resident Larry Lattin. Lattin joined the U.S. Navy at the age of 17.  Following training, Lattin served as a quartermaster under commanding officer Henry D. Davison, and interacted with him often via the delivery of reports.

Lattin read an eye-witness account of Commander Davison’s observations that describe the attack on Pearl Harbor from his eyes, and where, at the time, Davison was the officer of the deck aboard the U.S.S. Arizona.  Davison’s account is an incredibly harrowing summary of finding a way out, running through flames, and plunging in and out of deep water to rescue survivors. 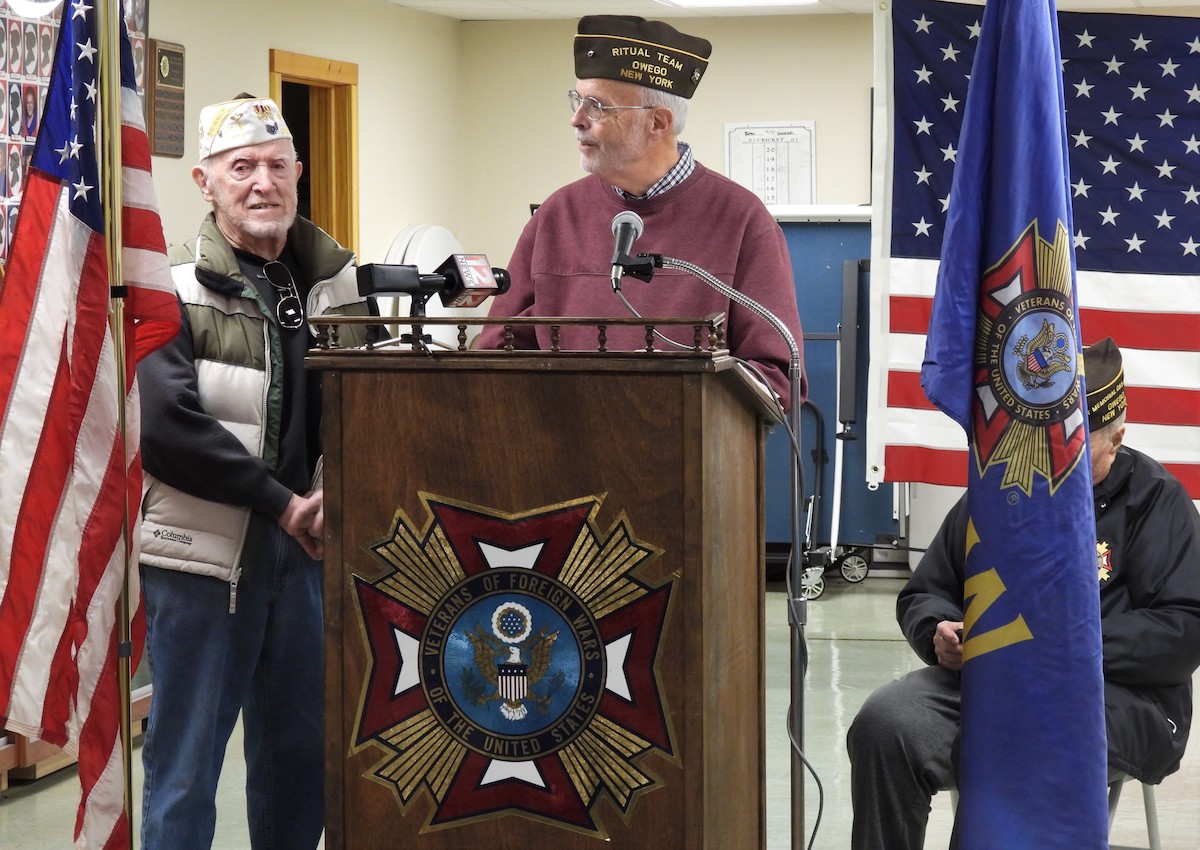 Family members were invited to speak at the remembrance ceremony, including Linda Hyatt and Joe and James Stocks, children of Donald Stocks, along with Jody and Bob Tatich, daughter and son-in-law of Richard Hopkins, and Lee Dunham, the youngest of Lester Dunham’s five children.

Hyatt read a heartfelt poem describing a mother’s love for her son, who had gone off to war. Bob Tatich commented that Hopkins was very humble about his service to the country, but did eventually talk about the war.

Dunham shared that his father visited area schools to educate youth about his military experiences, and remarked, “I wish these younger generations would realize what these folks went through,” and further shared that the day should continue to be used as a teaching aid for generations to come.

Lester Dunham enlisted in the U.S. Marines in 1939, and one of the first from Tioga County. In addition to Pearl Harbor Dunham fought at Midway, Guadalcanal, Tulagi (Solomon Islands), and Iwo Jima.

Gordon Ichikawa, of Owego, shared the story of his late mother, Kiyo, who was detained along with other family members in internment camps during the war, and remarked, “You would think they would have ill feelings, but they thought it was what they needed to do to show patriotism.”

Commander Beard noted that the greatest generation grew the country to what it is today, and added, “Some of the most impactful learning comes from listening to veterans.”

Concluding the ceremony, Steve Palinosky performed a bugle rendition of Taps.  Acknowledged at the end of the ceremony with a birthday song was V.F.W. Honor Guard member George Carrigan, who turned 90.

Fellow Honor Guard member, Dean Morgan, announced that the group is always looking for new members, and shared that the first funeral he participated in was for Tom Ichakawa. The Honor Guard travels to funerals throughout the County, and honors about 50 veterans each year.

Raftis remarked, “Pearl Harbor endures as a symbol of American resilience and resolve.  Eighty years ago everything changed for the United States. It was a day that our parents, grandparents, aunts and uncles would never forget.”

Be the first to comment on "Commemorating Pearl Harbor "