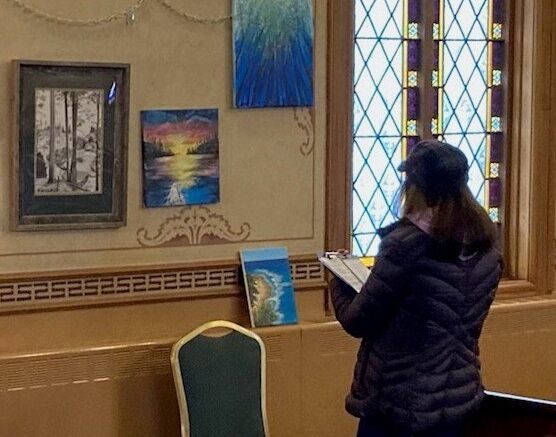 The Newark Valley United Church of Christ recently announced their art show winners. The show, which welcomed artists to showcase their talent, was held at the Church in mid-November.

In a prepared release, the organizers of the show wrote, “Art can speak things that often cannot be said with words. The Newark Valley United Church of Christ would like to thank all of the artists for participating in our second annual art show, and sharing their work with the community.”

The release continued, “Our goal is to simply support artists and their creations, as well as to build connections and community. Their artwork helped to share the beauty of nature with others, and helps others to see a little bit of heaven in their work.”

Suzanne Lachman served as the show’s judge, and the organizers hope to grow the show next year. They are also encouraging the artists to participate as well in their poetry jams, music nights, and other events they would like to host at the church.

The show is held, in part, to honor the memory of Bill and Jeannette Pomidor, parents of Catherine Young, who were very much supporters of the arts in their hometown of Willoughby, Ohio. Catherine’s mother was an artist and traveled the country with her artwork after she retired from teaching, and her father was an English professor that began writing after his retirement.

The following are the winners from this year’s show.

In age group nine to 15, first place and $100 went to Ed Dufresne; second place and $75 went to Anna Eastman; third place and $50 went to Jace Baker; and an honorable mention and certificate was awarded to Avi Schwartz Steib.

For adults, first place and Best in Show, along with $150, was awarded to George Lohmann; second place and $100 went to Marty Schneider; third place and $50 was awarded to Cassandra Natali; and Lisa Upham earned an honorable mention and a certificate.