For three days in late October, two Newark Valley residents, who requested to be anonymous for this story, took to cleaning up Settle Cemetery, located in Newark Valley, N.Y. The cemetery dates back to the early 1800's and is the final resting place for many of the town's original residents. Provided photo.

A cemetery in Newark Valley, N.Y., dating back to the early 1800’s, recently received some overdue attention.

For three days in late October, two Newark Valley residents, who asked to remain anonymous for this story, took to clearing out a host of overgrown thorn bushes (some were several feet tall), used chain saws to cut up fallen trees, raked and picked up stray branches, and even brought in equipment for other clean up.

The hard work did not go unnoticed.

Several residents of the area have expressed their thanks via the Facebook page, “Forgotten Northern Tioga County New York.”

A few residents indicated that they did not even realize the cemetery existed, and others mentioned that the densely wooded location is challenging to get to.

Pictured is a sign at Settle Cemetery, located off Dobson Hill Road and near Markham and Settle Roads in Newark Valley, N.Y. Recently the cemetery, which dates back to the early 1800’s, received an overdue clean up. Provided photo.

Settle Cemetery is located off Dobson Hill Road and near Markham and Settle Roads. According to findagrave.com, the cemetery is home to 70-plus burials.  Other history suggests that it was most likely affiliated with a church once located across the road from the cemetery.

The church, according to old newspaper records, was lost to a fire after being hit by lightning in 1904. The foundation still exists.

A birth date of 1772 is engraved on the gravestone of David Settle, who relocated here from Albany County, N.Y. The cemetery is also the final resting place for many of the town’s original residents such as Jacob Zimmer, who was born in 1777 and died in 1870. Common surnames include Settle, Pitcher, Saddlemire and Zimmer, among others.

Also buried in the cemetery are Civil War veterans. One veteran, David Saddlemire, enlisted in August of 1862, was wounded in action at Gettysburg in July of 1863, and then died of disease in May of 1864. He was 25 years old.  Another Civil War veteran was Jacob Saddlemire.

Long-time Newark Valley resident Kelly Frederick Sweet shared that she volunteered her time in the early 1980’s by placing American Flags on veteran graves at several of the smaller cemeteries in town. She recalls there were at least three veterans buried in Settle Cemetery.

Sweet said that she often accompanied Rollie Noble, a hometown hero and World War II veteran, and for whom the Noble Room at the Newark Valley Municipal Building is named.

Sweet remarked, “It was very enjoyable to place flags,” and further explained that she recalls one year when Noble had difficulty finding a grave due to the conditions at the time, and then decided it was best to leave the flag by the main gate. 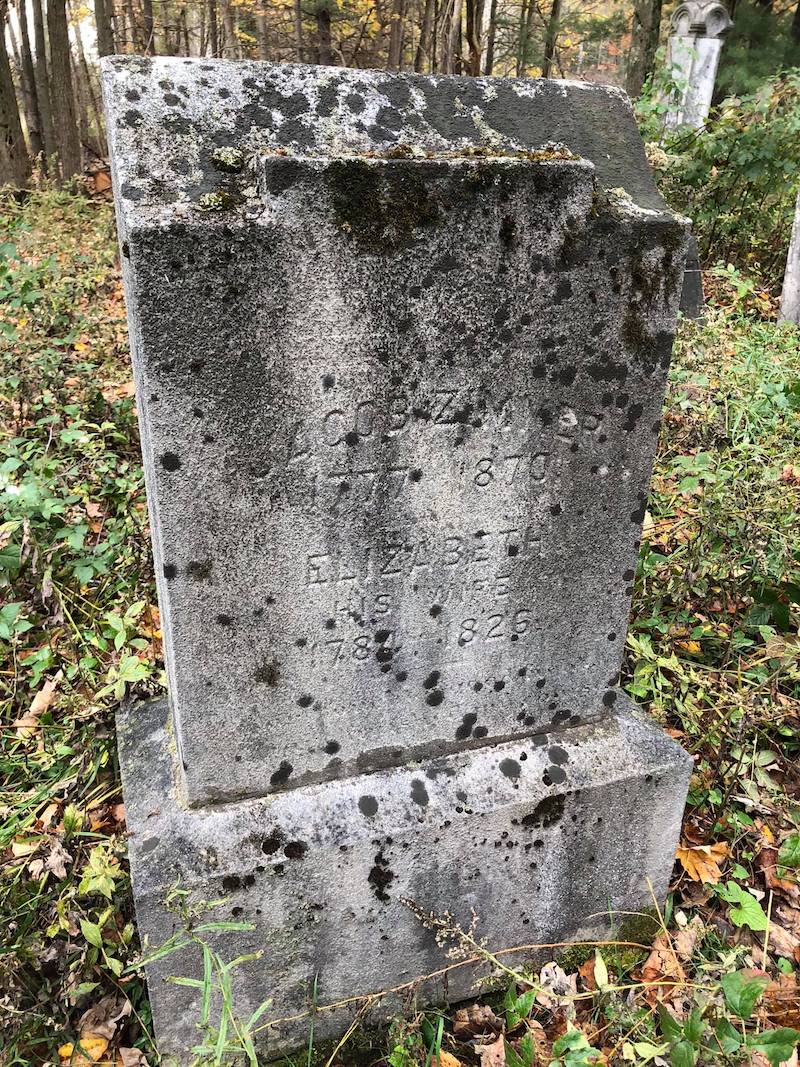 Pictured is the gravestone of Jacob Zimmer, one of Newark Valley’s original residents buried in Settle Cemetery. Some residents have expressed interest in cleaning up head stones. Provided photo.

In New York State, the town in which the abandoned cemetery is located is typically responsible for its maintenance tasks.

According to the Department of State, the Division of Cemeteries and the New York State Cemetery Board regulate only those cemeteries that are incorporated under the Not-for-Profit Corporation Law. Cemeteries that do not fall under their jurisdiction include religious, municipal, private, national, and family cemeteries.

Currently, the Division of Cemeteries oversees approximately 1,700 not-for-profit cemeteries in the State. In Tioga County it is often small groups of dedicated volunteers who manage and maintain the not-for profit cemeteries.

Stuart Yetter, Town of Newark Valley supervisor, explained that the Board previously reached an agreement with the property owner near Settle Cemetery to gain access so that an entrance roadway could be created.

Yetter remarked, “There are at least half a dozen cemeteries we are responsible for, and the Town does make the effort,” and then further explained that bare-minimum funds dictate how often they are able to address the cemeteries, and the work is usually hired out.

Yetter welcomes concerned residents to reach out directly to the Town Board or himself, and would entertain volunteers to step up to help maintain Settle Cemetery or the other smaller cemeteries on the Town’s list.

One common feeling among residents is that Settle Cemetery, and others, should be cared for consistently, and as a way to show respect to the people who helped build the town.

Be the first to comment on "Caring for our cemeteries"