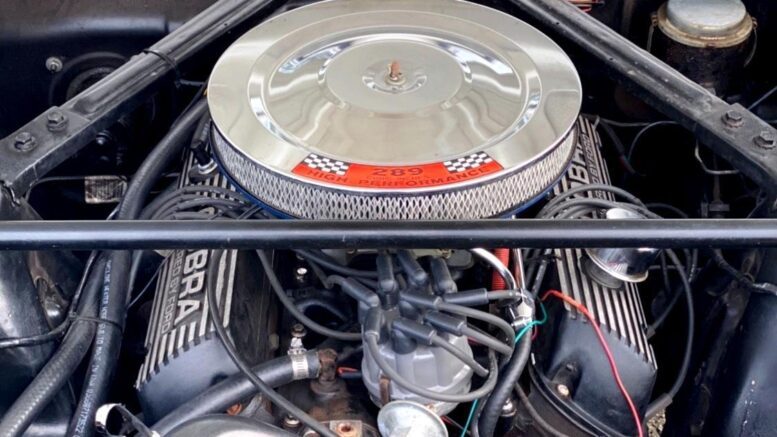 Q: Hi Greg and I’m wondering if you could explain further about an article you wrote back five years ago about your friend’s Pontiac GTO and a few months ago a Mustang GT350?

Specifically, the owners of the GTO Judge and most recent article in Auto Round-Up Mustang Magazine featuring Scott Shipman’s gorgeous 1965 Mustang GT350 fastback both said their cars were “tributes.” Both of these collector cars don’t have some of the original parts and are non-numbers matching.

Do you still feel a “tribute” in this hobby basically means fake? For example, someone takes a ’65 Mustang GT Fastback, paints it white with blue stripes, slaps on Shelby GT350 and everything else that makes it look like a real Shelby. Can they call it a “tribute” or a “clone” car, or non-numbers matching?

In the Miller’s GTO Judge example, did they take an ordinary ’69 GTO and slap on the Judge decals and stripes, or is it a real Judge with a non-matching engine or other drive-train parts? If it’s a real Judge, then it’s not a tribute, even with the wrong engine. What exactly is a tribute or clone car? I am sure many of us would appreciate knowing.

I enjoy your columns very much. Kevin L., email from Spokane, Washington. 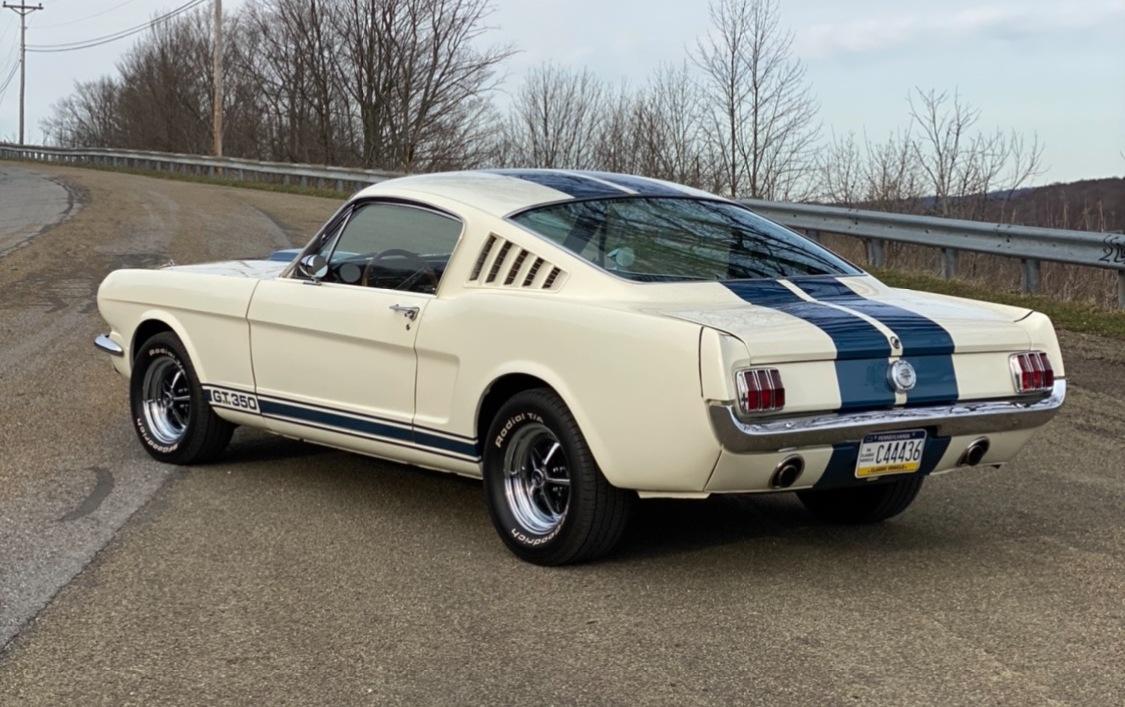 A: Kevin, thanks much and I’ll be happy to explain. In the case of the Scott Shipman 1965 Mustang GT350 and the Nickie Miller 1969 GTO Judge, both are, according to the vehicle identification numbers (VIN), classified in the tribute category. Both are originally a Mustang GT and a Pontiac GTO, not a GT350 or a Judge. Still, both are excellent examples of the “real deal” vehicles they now represent.

Shipman’s Mustang was assembled in the New England area by a master collector car mechanic to be exactly what it is today, and it is a tribute to the most valuable collector car 1965 Shelby Mustang ever built. You can check out what the real Mustang GT’s bring at the Mecum and Barrett Jackson auctions, but the one that takes the top prize is the Ken Miles driven Carroll Shelby first ever 1965 GT350-R. This car is the first “R-Model” race ready GT350 and Godfather of just 36 GT350-R models ever assembled. Following the R’s SCCA racing success in B/Production, Ford introduced the numerous street based GT350 Shelby’s of which Shipman’s is a fine tribute example.

Before I get into further explanation of tributes, clones and non-numbers, I would opine that both the Miller’s GTO Judge and Shipman’s Mustang GT350 are worth in the $50,000 to $75,000 range at current collector car popularity values (perhaps more to the right buyer).

Now, on to the tribute, clone and “fake” discussion. Car collectors have used all three of these terms, but clone is now not as popular in the collector dictionary and many times replaced by tribute. The word “fake” was the most unpopular for a non-numbers matching car, and used mostly when an owner was trying to pass off his/her car as “original numbers matching” when most of the educated collectors knew better. Through the years, many unscrupulous sellers sold so-called “numbers matching” vehicles to unaware buyers to the dismay of the new owner. However, now that the hobby has evolved and everyone seems more educated, the “fakes” are now easily uncovered. 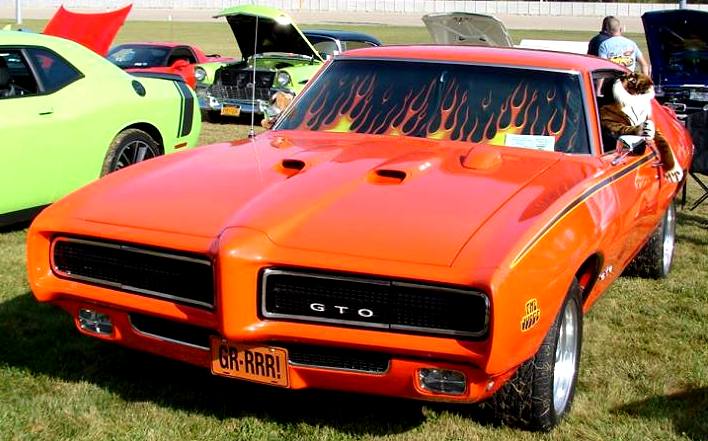 The author’s 1972 Dodge Challenger is not original, nor is it a clone. Challenger dropped the R/T trim and big block 383, 440 and Hemi engines in 1972 and Greg’s car is built as a tribute R/T, including a 440-V8 TNT engine from a Chrysler model back in 1969. Dodge called the 440 a Magnum, while Plymouth dubbed the high-performance 440 engine a Super Commando. (Greg Zyla photo)

To explain what a tribute is I have a 1972 Dodge Challenger R/T “tribute,” powered by a high performance, 440 (plus .40) TNT engine that came out of a 1969 Chrysler. Considering the big-block engine was not available in 1972 in the Challenger line, nor was an R/T model, most everyone I run into knows this is a “tribute” car. So let’s just say a tribute can be any car that is not original and does not have correct year parts.

In my opinion (which I again stress), this is where a clone is different from a tribute. In my dictionary a “clone” is a car that is correctly representative of the year it was produced, but does not have the original engine / transmission and a few other ancillary parts. So, if someone has a 1967 Dodge Coronet and then puts a 426 Hemi engine in it, adds R/T badges, hood and rear treatment, exhausts, etc., with a 4-speed and Dana 60 rear or a Torqueflite with an 8 3/4 rear, then this would be a nice R/T clone because you could go into a dealer back in 1967 and order one just like it. So, I’m still a fan of the word clone because it represents a car that was available in whatever year and sits with the same mechanicals as a numbers matching R/T. To me, both the Miller GTO (although almost a clone) and the Shipman GT350 are tributes.

Now, I mention the vehicle Identification Number (VIN) plate because this is also very important. When you see what looks like a totally junk car being sold for $15,000, it’s because the VIN designates it as a real, rare muscle car, unlike the above-mentioned 1967 Dodge R/T Hemi clone example. Whoever buys it can put it back together in original form, with a numbers matching replacement Hemi engine from 1967 and a correct transmission that relates to 1967.

Photos of the engines in the three featured tribute collector cars. (Shipman and Zyla Photos)

When completely finished, the new owner can advertise the car as a real ’67 R/T with correct VIN and use of 1967 parts. The seller explains to the new owner it is a correct year engine, but not the one that originally came in the car. So can you call it numbers matching? Some say yes, others no, but the car is worth quite a bit more on the market regardless, thanks to the VIN. (Popular now is the word “correct” in regards to engine / transmission.)

I know this is all a bit confusing, but the hobby pretty much identifies and investigate cars that fall into these categories with proper money values attached to fake, tribute, clone, correct, and numbers matching efforts. To assist, there are many professional appraisers that can tell you quickly (for a fee) exactly what you are looking at. To me, an original numbers matching car is the ultimate, but right now I’m happy to own a ’72 Challenger R/T tribute. Remember, too, that clone is also used by many pros as the same nomenclature as tribute, but I disagree. My ’72 Challenger is in no way original, that’s why I call it a tribute and not a clone. I basically built the car to be what I feel a ’72 Challenger R/T would have been like.

In ending, be it tribute, numbers matching or clone, the hobby is so much fun nowadays, regardless of proper names. I expect it to be even stronger as the years go by.

Thanks for your letter Kevin.

(Greg Zyla is a syndicated auto columnist who welcomes reader input on collector cars, auto nostalgia and motorsports at greg@gregzyla.com).

Be the first to comment on "Cars We Remember; A $3.85-million Mustang GT350-R and tributes, clones and ‘fakes’ explained"