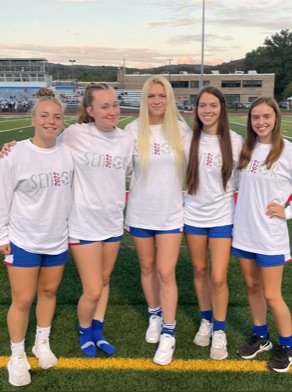 Owego Free Academy varsity soccer team seniors Carmen Jorgensen, Delaney Carrigg, Ashlyn Middendorf, Jessalyn Corson, and Jewel Corson were honored on Friday, Oct. 8, in the midst of what is turning out to be a very successful season. The seniors, who represent the backbone of the team both offensively and defensively, have rightfully been singled out for their contributions to the team throughout the years.

”They are also having a tremendous season,” said Linn Bruce, parent coordinator for the OFA girls’ varsity soccer recognition event, of the team’s current season.

Delaney Carigg has been the goalkeeper for the team for the last three years and has been credited with over 100 saves during her career.

“Although she has battled a serious foot injury, gone through multiple surgeries and dealt with a lot of pain, she has overcome these challenges and is having a great senior year! Delaney is incredibly positive and always willing to work hard and contribute to her team,” said Chrysler.

Carmen Jorgensen has been the offensive backbone of the team from the moment she set foot on the field four years ago, totaling an incredible 39 goals and 21 assists as of early October.

“Carmen excels offensively with her powerful finish on goal, especially from a longer range. In addition to Carmen’s skills, she consistently displays a solid work ethic, good sportsmanship, and is a captain for our team,” said Chrysler.

Jessalyn Corson not only set an example for her teammates on the field, but off the field as well due to her dedication to rehabbing a torn ACL that cost her sophomore season.

“Jessalyn worked hard to recover and put in countless hours getting back to playing soccer,” said Chrysler, adding, “Jess handles the ball well and has been extremely instrumental in making great passes while attacking towards goal.”

Jewel Corson has been a jack-of-all-trades on the field, according to Chrysler, and has also served an added role as a source of positivity for the team.

“She is an extremely kind player who encourages everyone, works hard, and commits fully to the success of her team,” Chrysler said of Jewel, and added, “Jewel has great vision of the field and understands how to make good plays. She has played a vital versatile role over the years in the girls soccer program.”

Ashlyn Middendorf, long noted for her determined play on the field, has served as the rock of the back end for the team, and while keeping the team loose with her sense of humor.

“We have relied on her to lead our team from the back and transition us to the attack. Ashlyn’s optimism, work ethic, flexibility, and resilience has earned her a captain role as a leader for her team,” Chrysler exclaimed.