Eric D’Arcy, a social studies teacher, wrestling and cross-country coach for the Newark Valley School District was recently inducted into the 2021 National Wrestling Hall of Fame.

D’Arcy brings to the mat decades of wrestling experience as a seasoned coach, and as a former college and high school wrestler.

D’Arcy commented, “This award is less about me and more about the Newark Valley community, the people who coached with me, and the athletes I have had the honor to work with,” and added, “I am the recipient of the award, but it is as much their award as it is mine.  It has been a wonderful 30 years here at Newark Valley and I have been humbled by this award and the experience.”

According to a write-up presented at the Upstate New York Chapter of the National Wrestling Hall of Fame awards ceremony held last month, it was D’Arcy who revamped Newark Valley’s wrestling program when he accepted a position back in 1992. 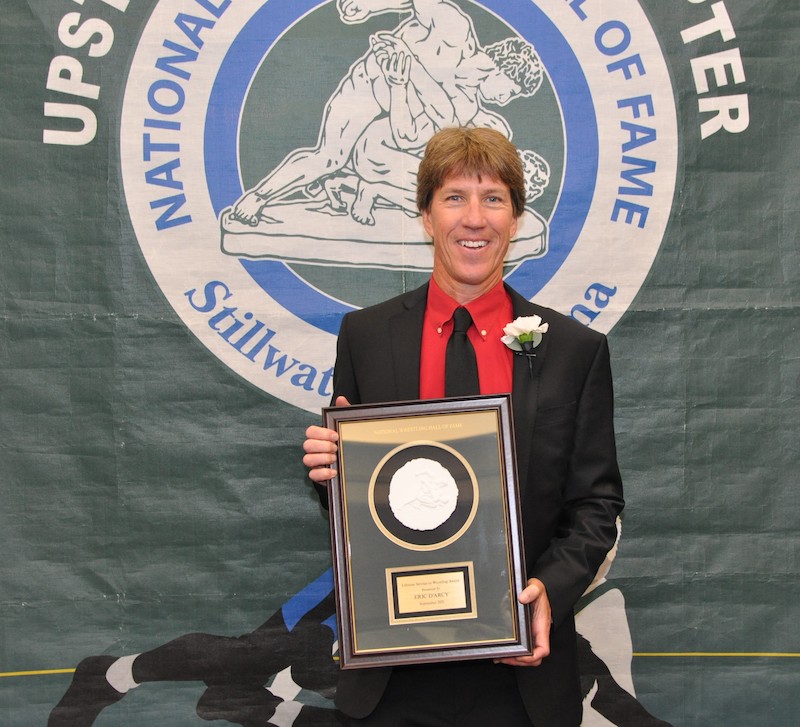 Since then his teams have been consistently positioned in the New York State high school rankings and have seen multiple wins in IAC league, division and sectional titles, and a dual meet championship, just to name a few. D’Arcy has coached several state qualifiers, and state place winners and sectional place winners as well.

And not only wrestling, Coach D’Arcy’s impact on Newark Valley sports has been significant, including numerous cross-country championships.

D’Arcy explained that there are several things that lead to success, both on and off the mat and running trail. First, he said, is setting reasonable and obtainable goals while also having a daily long-term goal.

D’Arcy remarked, “I also believe you need to surround yourself with successful people who are driven to excellence. You are more likely to rise to the challenges of life when those around you are also working to succeed.”

Following his own successful high school wrestling career, Eric’s journey took him to Gannon University in Erie, Pa. He then finished up his college wrestling years at Oswego State where he was a SUNYAC place winner for two years.  Eric went on to become an assistant coach at Fulton, where he helped guide that team to a state championship. He also coached for two seasons at North Rose-Wolcott before arriving in Newark Valley.

Looking back, D’Arcy credits the remarkable high school and college coaches he had, and said they offered a significant impact on his life and coaching.

D’Arcy shared, “I would just like to say a special thank you to all of the people who have been such a big part of my life, from the athletes and parents to the many wonderful people in our community, as well as the people I have coached with.”

Additionally, he commented, “It has been my honor and privilege to have had the chance to know all of them and have them be such a wonderful part of my life.”

Eric added, “Finally, to my family, they are truly amazing and the greatest support a person could ever hope for, and we have loved the journey.”

One of those family members, Eric’s father, Eamonn, stated, “He’s always been a go-getter and full of energy, and I am very proud of him.”

The National Wrestling Hall of Fame, a non-profit headquartered in Stillwater, Oklahoma since 1976, is a museum and hall of fame for amateur wrestling.  Their mission is to preserve history, recognize excellence, and inspire future generations. The organization established a State Chapter program in 1993 where they pay tribute to coaches, officials, and contributors who positively represent the sport of wrestling.