Q: Hi Greg, and I want to ask if Pontiac ever made a model called the Pathfinder in the 1950s? I remember all the full size Pontiacs, including Star Chief, Bonneville and Catalina, but can’t ever recall seeing a Pontiac Pathfinder. I’m not computer literate, so I appreciate any input you can help with. Frank S., from Phoenix, Arizona, and I see your interesting columns in Auto Round-Up Magazine.

A: Frank, yes, Pontiac did make a Pathfinder, but it was only available in Canada. Back in the 1950s many of the car companies made the Canadian models that were actually built in Canada, yet were similar to the U.S. models. They also came with different names, different drivetrains at times, and especially the many different front grilles and rear taillight treatments.

The actual assembly of cars built in Canada has been going on for decades, as many car manufacturers have plants there. Included are Ford, GM, Stellantis (formerly Fiat Chrysler), and Honda. Former manufacturers include Hyundai, Suzuki, Volvo, and most recently Toyota, which has temporarily switched its focus back to the U.S. and Mexico plants because of part shortages at the Canadian points.

Still, even without the companies that left and Toyota’s current closure, Canadian car manufacturing is big business, while defunct manufacturers include Studebaker, Bricklin and American Motors, to name but a few.

Canada is currently the 13th and seventh largest car builder, producing 1.4-million vehicles and exporting $32 billion worth of vehicles in 2020. Canada’s highest rankings ever were the second largest producer in the world between 1918 and 1923, and third largest after World War II.

Automotive manufacturing is still one of Canada’s largest industrial concerns, accounting for 10% of Gross Domestic Product and 23% of the manufacturing trade. Canada produces passenger vehicles, trucks and buses, auto parts, truck bodies and trailers, as well as tires and machines-tools-dies-molds.

The auto industry directly employs more than 125,000 in vehicle assembly and auto parts manufacturing, and another 380,000 in distribution and aftermarket sales and service. (Thanks Wiki.) As far back as 1918, General Motors had a presence in Canada with its General Motors Canada facilities while Ford was first, organizing in 1904. Both had facilities in Windsor, Ontario, right across from Detroit. 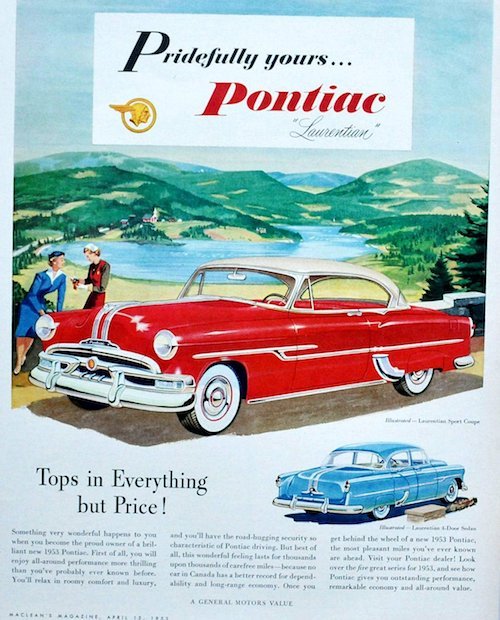 Perhaps the two best-known vehicles that were built in Canada were the Lincoln Towne Car and Dodge / Plymouth / Chrysler minivans. The Towne Cars were all built in Canada until Ford discontinued the model, while the Chrysler minivans were built solely in Windsor, Ontario, from introduction in 1984 up through 1987 when it began sharing production with a facility in St. Louis, Mo.

When one considers that Canada and Detroit are but a waterway away from each other (you can see the Windsor, Canada, sign all lit up from your hotel room in Detroit), the fact that earlier Canadian models were a little different than the U.S. isn’t really a surprise, and helped distinguish a Canadian built car.

As for your question on the Pontiac Pathfinder, it was exclusive to Canada and was Pontiac’s entry-level model. Unlike the U.S. Pontiacs that featured its own Pontiac engines and came in Chieftain, Catalina and then Star Chief and Bonneville names, the Pathfinder was based on the Chevrolet brand utilizing a Chevy chassis and engine, while incorporating most of the Pontiac front end style.

In 1958, the last year of the Pathfinder, this Chevy chassis utilization resulted in shorter front and rear Pontiac fenders than the U.S. built Pontiacs along with the Canadian specific hubcaps. The interior was often different, and along the way body styles even included a sedan-delivery, two-door coupes, four-door sedans, and a station wagon Safari model. The Canadian built Pontiac sedan delivery was available from1954 through 1958 model years but was not sold in the U.S. after 1953. 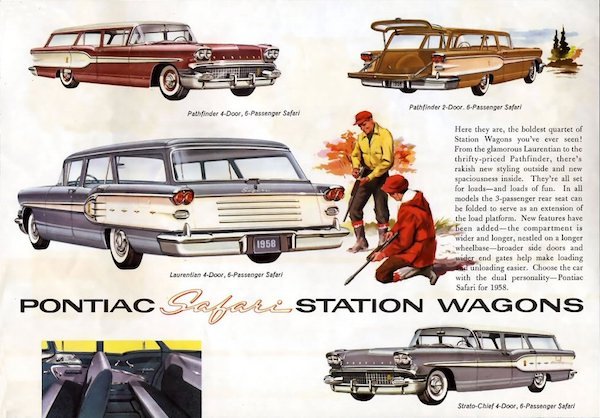 1958 was the final year of the Canadian-built Pontiac Pathfinder. The vehicle utilized Pontiac bodies on a Chevrolet chassis along with either Chevy inline-6 or small block 283-V8 engines. The U.S. built Pontiac was a bit longer and came with a Pontiac built V8 engine. (Compliments GM)

These entry-level Canadian Pontiacs, however, date back to 1946. Up until 1953, Canadian Pontiacs utilized just the front-end sheet metal and the Chevy chassis. These Pontiac / Chevy hybrids were the entry level model and called the Pontiac Fleetleader until the new entry level Pathfinder appeared in late 1953 as a 1954 model, again using Pontiac features on the Chevy body.

Thus, as mentioned above, model year 1958 was the last for the Canada only Pontiac Pathfinder models. Then, following an agreement called the Auto Pact Treaty under president Lyndon Johnson in 1965, Canada-specific models of U.S. makes that had to pay unfair tariffs were gradually phased out and no longer needed cosmetic changes to avoid unfair taxes. However, Pontiacs manufactured and sold in Canada maintained their different model names like Pontiac Laurentian for years, even after the treaty took effect as did Ford with its Mercury Meteor and Monarch trims. By the early 1960s, many of the U.S. and Canadian cars were similar in name, nomenclature, and production drivetrains.

Hope this answered your question Frank, and thanks for your kind words.

Be the first to comment on "Cars We Remember; Canadian car history – Pontiacs were mostly Chevrolets in the 1950s"