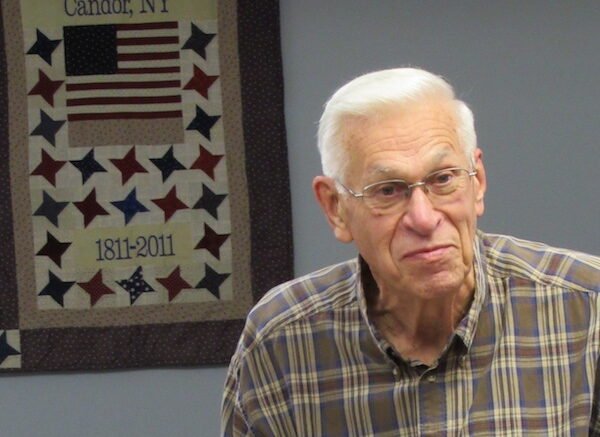 Milton Dougherty, of Candor, received a special plaque commemorating his 22 years as President of the Candor Historical Society at their September meeting, and after stepping down to make way for a new president and Board of Directors. Dougherty remains a member in good standing of the Society.  Photo credit: Carol A. Henry.

During his role as President, Dougherty diligently fulfilled the stated purpose of the Society, “To bring together those people interested in the history of the Town of Candor – to discover and collect material which may help to establish or illustrate the history of the area.”

But Dougherty’s interest in history, and Candor’s in particular, began when he would often listen to stories told by his Grandfather, James Elbridge Dougherty, and his father, Elbridge Russell Dougherty – tales of how his early family ancestors settled in the area. 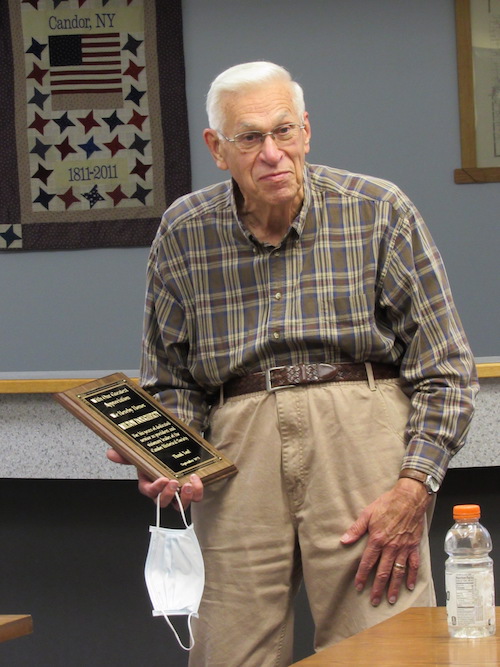 Milton Dougherty, of Candor, received a special plaque commemorating his 22 years as President of the Candor Historical Society at their September meeting, and after stepping down to make way for a new president and Board of Directors. Dougherty remains a member in good standing of the Society.  Photo credit: Carol A. Henry.

“My Great-Great Grandfather, James Dougherty, bought the farm up on the hill above Catatonk in 1834, and it is still in the Dougherty family today,” said Dougherty, adding, “So my interest in Candor history stems from that. My Grandfather and my father had a great deal of knowledge about the family down through the years and would often relate stories about events and relatives that pertained to the Candor area.”

Dougherty’s fascination in local history didn’t end there. During his school years he was interested in learning how this country was settled, especially how the Revolutionary War was fought to establish a new and free nation, and learning how those events affected the Tioga County area. In the 1980s his curiosity in the Town of Candor increased, which lead him to become involved in the town’s governance. He was elected as a Town Councilman, a position he held for 26 years.

As President of the Candor Historical Society, Dougherty was very active initiating the recording of personal stories of people who had a long history in the Town of Candor.

“As time went on,” Dougherty said, “those recordings extended to documenting the monthly programs, and now the Society has about 40 videos of those programs available. Coming up with eight to ten programs a year that had some historical relevance for the monthly meetings was sometimes a difficult task, but there was good cooperation from those who were approached and the result was that many interesting programs were presented.”

Another highlight of Dougherty’s Presidency was his desire to make the Society something more than monthly meetings. And, with numerous historic and interesting sites and museums in New York, he planned and coordinated several trips to visit a few of those places. Along with his wife, Pat, they would visit sites ahead of time to learn about them and then make arrangements for the group’s visit. Such trips included diverse and National Historic Landmarks like the Jell-O Museum in LeRoy, Seward House in Auburn, the U.S.S. Slater in Albany, and a trip to Steam Town National Historic Site in Scranton, Pa.

“During my term as President, not all things have been pleasant and smooth,” said Dougherty, adding, “The greatest tragedy that I experienced was the death of my wife. Pat was very much involved in all parts of the Society and contributed greatly to its success, and even though I carried on and the Society carried on, the task was much more difficult without her. The other loss that I felt was the death of so many of the longtime faithful members of the Society. I very much missed the support that they gave. The most disappointing event that occurred was the flooding of the Catatonk Hall.”

Despite all odds, Dougherty’s accomplishments have been many. With the help of the Board and Historical Society members he’s been able to keep the Candor Historical Society front and center in the community. Initiating a mailing of a newsletter twice a year, which contains a President’s Message, as well as participating in various community events such as the 4th of July Parade and Candor Fall Festival, are just some of the contributions of Dougherty.

Although Dougherty is no longer on the board, he has a few thoughts and thanks to share.
He reminisced, “Conditions and technology have changed dramatically over the last 22 years. With the use of personal computers, smart phones and social media, contact can be made almost immediately with nearly everyone. I believe this technology can be used to great advantage by the Historical Society. The future of the Society is going to be dependent on getting more, and younger, people involved in not only being members, but involved in its operation. During my term I received great cooperation from all who have been involved, but especially the Village and Town Historian, Carol Henry. Without Carol’s assistance and participation, my long term as President would not have been nearly as successful or enjoyable as it turned out to be.”