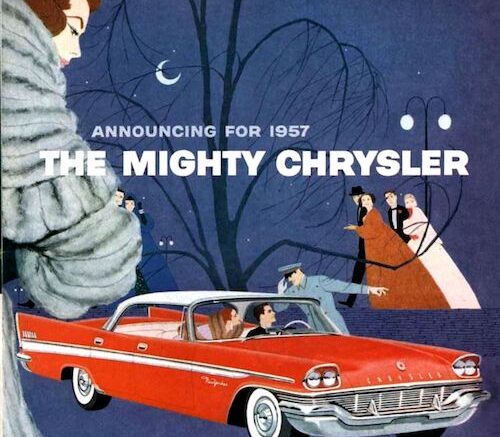 Dual front headlights appeared on the Chryslers in 1957. The new design was a favorite with consumers. (Compliments Chrysler)

Q: Greg, I saw a nice 1981 Chrysler Imperial for sale recently and wonder if maybe it could become more of a classic than it is now. What is your opinion and what are they worth today?

Also, my uncle had both Chryslers and imperials back in 1957 and then an Imperial in 1959. They were real beautiful cars. Thanks for the memories. Sam K., Spokane, Washington.

A: Sam, let’s start with the last generation of the big Imperials, not to be confused with the smaller Imperials that were produced from 1990 to 1993 on a stretched “C platform” variant ala Dodge Dynasty. These larger size Imperials were around for only three model years, specifically from 1981 to 1983.

The Imperial made its return to production after being absent from Chrysler’s lineup since 1975. The 1981-83 full-size Imperials were built when Chrysler was facing major financial trouble, and although a grand total of only 10,981 were ever built, it was a great looking and well-equipped car.

The 1959 Imperial was all-new and featured a 392-inch Hemi V8 under the hood. (Compliments Chrysler)

Surprisingly, although they looked full size, these Imperials were built on the mid-sized Aspen / Volare platform, and stretched to fulfill Chrysler’s marketing theories that also included the hit sibling Chrysler Cordoba. Cordoba debuted back in 1975 and sold a stunning 150,105 units. So basically, Chrysler put a nice Imperial body on the Cordoba chassis.

Personally, and as nice as Cordoba was, I feel a large part of its success came from those famous television commercials that featured the late actor Ricardo Montalban of the hit TV show, Paradise Island. He was always touting Cordoba’s “Corinthian leather” and the Cordoba lasted until 1983 and finished its successful run as Chrysler’s most popular “kinda’ full-size” model, with over 757,000 sold.

Meanwhile, the 1981 to 1983 Imperials came with a fuel injected 318 engine, churning out just 140 government restrained horsepower and filled with lots of luxury items. Cordoba, however, offered a six-cylinder engine along with a carburetor fed V8 during a time when fuel mileage was important. 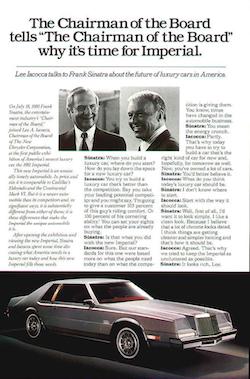 Chrysler Imperial marketing featured two big name “chairmen of the board” in Lee Iacocca and Frank Sinatra. The Imperial did not sell well and was discontinued after three model years. (Compliments Chrysler)

I’ve always felt Imperial’s 1981-83 styling was one of their best looking efforts; even to this day. With a Lincoln style front grille that merged nicely with a rear that mimicked the second-generation Cadillac Seville of that era, the Imperial was a true eye catcher. The rear design was called a “bustleback,” similar to the British cars from the fifties like Rolls Royce and Bentley. Some of the main features Imperial offered included Mark Cross interiors, electronic digital instrumentation, new clear coat paints, and a fully loaded car for $18,311 retail. The only option available in 1981 was a power sunroof.

However, unlike Cordoba, dismal sales and fuel injector problems were the result. First year sales found just 7,225 1981 Imperials sold resulting in a major marketing move. Then Chrysler head Lee Iacocca, remembering Montlalban’s success with the Cordoba, hired friend Frank Sinatra to sing, “Isn’t it time for an Imperial” in commercials. But the economy wasn’t good, consumers wanted gas savers and Imperial sales dropped to just 2,329 in 1982. In 1983, only 1,427 Imperials were sold that final year.

Following the cancellation of both Cordoba and Imperial at the end of 1983, Chrysler set its sights on saving the company and went to work on the new minivan, which was waiting in the wings. Thanks to the 1984 industry first Dodge-Plymouth “minivans,” the company survived and then thrived, staving off bankruptcy. Additionally, the front-drive compact K-Cars, namely Plymouth Reliant and Dodge Aries introduced in 1981, also helped keep the company afloat.

The 1981 Imperial was a great looking two-door luxury car. It lasted until 1983 and was not a big seller as only 10,981 were ever sold. (Compliments Chrysler)

Now, let’s move on to those great Chrysler and Imperials from 1957 and 1959, both top offerings from Chrysler Corporation. Back then these beautiful cars not only looked good, they packed some real punch under the hood.

The New Yorker was Chrysler’s full-size, 126-inch wheelbase luxury model joined by siblings, albeit less luxurious, Saratoga (also 126-inches) and entry level Windsor, which rode on a smaller 122-inch wheelbase. However, if you wanted the true top-end MOPAR luxury car those years, it had to be an Imperial that rode along on a 129-inch wheelbase while the Crown Imperial limousine stretched out to 149-inches.

These Imperials sat atop the Chrysler lineup in luxury appointments and upper-class opulence. As for corporate pecking order, Chrysler competed against cars like Buick and Mercury while Imperial went head-to-head with Lincoln and Cadillac for consumer approval.

In my early 1950s memories, if you pulled up to my grandfather’s grocery store in Ranshaw, Pa. in a New Yorker, or better yet an Imperial, you were held in high esteem. I most remember the dual headlights that began appearing those years and also the rear tail fins, which grew bigger every year. This fin craze, which started in 1957, continued right on through 1960 and resulted in some great looking cars from the Chrysler family. There were also some Chrysler Corporation bombs, as I recall the 1960 Plymouth rear fins. Thankfully, come 1961, the fins started to disappear completely and sanity returned to the car designer blueprints.

All of the Chrysler New Yorkers and Imperials back in 1957 and 1958 featured the biggest Hemi V8 engine available at that time, notably a 392-inch powerhouse with 10-1 compression. Windsor and Saratoga models featured the smaller but still potent 354 Hemi V8.

It was common in the mid to late 1950s to order Chrysler-built cars with two four-barrels, even on special cross ram intake manifolds. Chrysler was ahead of the curve in fuel and air delivery and didn’t mind taking chances on intake design when it came to making horsepower. Notable, too, is that the first ever 361-inch wedge big-block V8, known as the B/RB engine, arrived in 1958 in the Dodge line and then appeared in 1959 in Desoto and Plymouth models. This V8 engine would grow to 383 inches and then max out at 440 cubes during the muscle car era of the mid to late 1960s and early 1970s.

As for your question on the value of a 1981-83, an Imperial in good condition is probably worth $5,800 to a high of $9,000 in excellent condition, according to Hagerty Insurance Valuation Tools. The value hasn’t changed much the last five years.

Thanks for your question Sam and let me know if you buy that Imperial.

(Greg Zyla is a syndicated auto columnist who welcomes reader questions on collector cars and auto nostalgia at greg@gregzyla.com.)

Be the first to comment on "Cars We Remember; Chrysler Imperials: luxury, power and looks"