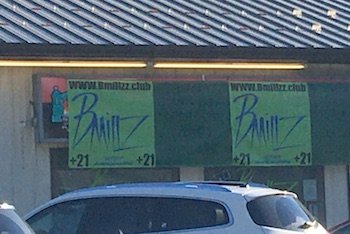 Pictured is the BMILLZ LLC store that recently popped up in Owego, N.Y. (Photo by Wendy Post)

Despite the fact that licensed sales of marijuana have not yet begun in New York State, a local business named BMILLZ LLC has begun gifting specific amounts of marijuana with the purchase of art. While some local residents and business owners believe that BMILLZ is operating illegally, town officials say it is out of their hands.

According to Don Castellucci, Owego town supervisor, this is a state and law enforcement issue, so there is nothing that they can do.

BMILLZ LLC, which is owned by Billy Fenton and David and Bart Miller, operates under a business model that has already been in place around the country for years and does not directly sell marijuana. Instead customers purchase art, often times stickers, and for buying a certain amount of art you are gifted with marijuana. For instance, if a customer were to purchase $40 worth of sticker art, they would be gifted with 3.5 grams of marijuana.

“BMILLZ is just a father, son and best friend, hometown boys, we are from here, taking complete advantage of the new laws put out in New York State; so far we are three stores in and have around 24 employees,” said David Miller.

Miller freely admitted there were aspects of the business that remained unclear, including specific taxation implications. Despite those uncertainties, David Miller said the business is expanding fast with stores in Owego and Waverly, one to open soon in Elmira, and stores in the works in Conklin and Whitney Point.

“We’re trying to get [into] those communities,” said Miller, adding, “I grew up in those areas – Elmira, Waverly, and Owego.”

Bart Miller freely admitted that the business existed in what he called a grey area, but is still doing the best they can to obey the law.

“So we sell artwork, like stickers, and with those we gift marijuana, but we ID everyone who comes in the store; children are not allowed in, only 21 and over,” said Bart.

David Miller remained steadfast that BMILLZ LLC operates completely within the confines of the current laws in New York, and residents are already taking advantage of their product.

Not everyone is thrilled about that though, especially the owners of Owego Hemp. For Emma Horton, co-owner of Owego Hemp, the issue is much more complicated than merely having some competition.

“What they are doing is illegal and we have lost customers who were previously purchasing CBD products,” adding, “They go to them now instead when they are selling unregulated and untested product. What happens when they get a bad batch or someone has a bad reaction?”

Horton continued, “They think they are being legal because in New York you can gift a certain amount of marijuana to someone. But they are wrong, we have been in touch with state legislators and they say they are wrong.”

When asked where the marijuana BMILLZ gifts are coming from, the Millers said that remained part of the grey area that they were operating within.

Owego Hemp has well established plans to get a license to sell marijuana when they are made available by the state, but will only be able to do so should Owego allow the sale, something Horton said she is now nervous about.

“Their presence is polluting local opinion and will damage our efforts to get a license; nothing they sell is regulated, they are just neighborhood weed dealers who will pack up and move at the drop of a hat when [it suits them],” Horton added.

Despite the local opposition, David Miller said that with the loophole BMILLZ LLC is not going anywhere, and that the business model they are using is not something they came up with on their own but is something modeled on pre-existing businesses already inside New York and across the country.

“We plan on being here for the long haul, we are bringing good jobs to the area and we will evolve with the law as needed,” said Bart Miller.