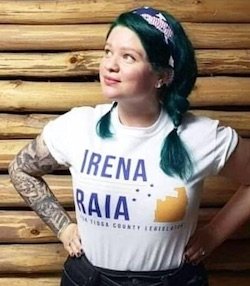 Irena Raia, a Campville resident, advocate and community organizer, recently announced her run for a Legislative Seat in District 1.

An Owego-Apalachin graduate who earned her Bachelor’s of Science in Communications, Public Relations and American Studies from SUNY Fredonia in 2013, Raia represents her district on the Tioga County Democratic Committee, where she also serves as chair of the communications subcommittee. Her platform emphasizes the need for a communications update concerning how local government reaches voters.

On her campaign website, runwithraia.com, Raia wrote, “One of the common themes I heard while petitioning was that voters never know what is happening in the county until after the window for their participation has passed. My goal in modernizing local government communication is to ultimately increase community participation, civic engagement, and ensure the future of the county is shaped by those who will inherit it.”

A self-identified homeowner and taxpayer, Raia’s run for office also focuses on representation.

In her campaign announcement, Raia wrote, “In 2021, the Legislature is an entirely Republican governing body that has two of nine seats filled by women, and zero seats filled by people under 50. [I believe] the established local political scene and its players have had enough time in office to become inclusive and forward thinking.”

“It is time for new perspectives to be shared and valued, and I have learned through experience that it’s difficult to have a voice without a seat at the table,” Raia added.

Frustrated at the lack of options to vote for and knowing she was not alone, Raia decided to run for office herself. She expressed hope that having a choice this year will resonate with unaffiliated voters on Nov. 2.

If elected, Raia says she will seek COVID relief funds from the American Rescue Plan Act [ARPA] and push to restore the county’s recycling program.